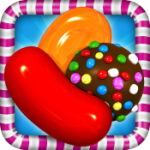 Recently, we’ve been talking about Candy Crush Saga (Free) a bit here at TouchArcade, both on our weekly podcast and in one of our recent “What Do You Think" articles. I know it’s not exactly our usual bag here, but tons of people are enjoying this game. People who used to chide me for spending too much time playing video games are obsessed with this, including many of my family members.

With my uncanny powers of perception, however, I’ve noticed the game is a bit of a bear if you aren’t looking to spend the GDP of a small nation on it, and so a lot of those people dear to me are getting stuck or having to fork over. Well, I’ve done what any justice-minded gamer would do: slapped on my vintage Puyo Puyo cap, waded into the trenches with not a penny to my assets, and have come out the other side with some tips to help people progress through this massive game.

What I found was kind of surprising. If you refuse to spend money, the game’s crushing difficulty at certain points makes it oddly compelling. The biggest bummer is when you hit the episode unlock points, because if you don’t want to pay or annoy your Facebook friends, you’re going to get one new puzzle a day for three days, and that’s it. Aside from that, though, I kind of enjoyed the way the game would smack me to the ground until I found the right approach to each stage. Reminded me of my dear old friend Metal Slug 3 ($2.99) in a perverse kind of way. Anyway, you’re here for a guide, not a review. There are, broadly speaking, five types of stages, so I’ve included tips for each type, as well as some general advice. 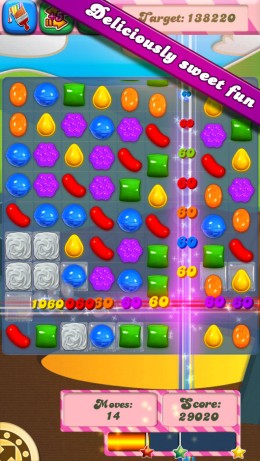 Don’t waste the few freebies the game gives you. Candy Crush will give you a free taste of each power-up, but it will never give you any more than that. The price to buy more is pretty much ridiculous, even if you aren’t doing a no-cash run. Therefore, these power-ups are like gold. The game will default to using them after it gives them to you, so make sure you switch them off before you start the next stage. Save them for stages that completely break your spirit. Never, ever burn more than one at a time. It’s never necessary.

Keep your eyes open for special matches. Scan the play area for potential four or five in a row matches, L-matches, and T-matches. This is obvious advice, but it’s critical for success in this game. Special matches create special candies, and you absolutely need these to progress without access to power-ups.

All other things equal, horizontal matches are better. There are, of course, situations where you’ll want to make a vertical match, but if you’re looking to open up your matching options, horizontal matches have better odds of giving you more matches. 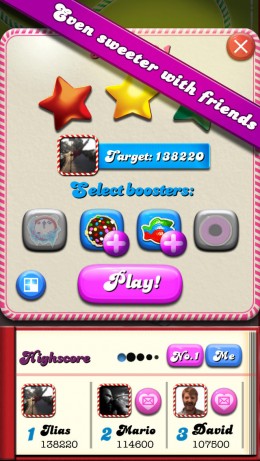 Special candy combinations are extremely powerful. So, you’ve made a special candy. You should use it, right? Well, not usually, actually. I mean, sure, if the special candy is in the right place to knock out a stubborn piece, go for it, but generally, what you want to do is hang on to it until you can get it next to another special candy piece. Matching one piece with another will create a variety of effects depending on which pieces you use, but they all have amazing screen-clearing potential.

Beware of chocolate and bombs. If chocolate appears, you need to get rid of it as soon as possible. Drop everything else you’re doing, because if you don’t, you’re going to end up with a very big problem on your hands. The same goes for bombs, because if the timer ticks down to zero, you’re done.

These are generally the easiest stages, giving you a certain number of moves to reach a target score. All of the tips in the general section are very useful here. Compared to other stages, it’s safer to fire off single special candies rather than waiting for a combo. Once bombs start showing up, clearing them is a great way to earn big points.

It feels like the bulk of the game is comprised of this type of stage, especially in the front half. In these stages, you have to make matches on top of squares to clear all of the jelly. Striped special candies are going to be your best friend here, and necessary once the game starts placing candy in jellied spaces of only one or two blocks. Focus hard on the goal. Every match should either be in service of making special candy or clearing a jelly space. Of course, sprinkle candy bombs are going to be great here, by themselves or better yet in combination. The next best combination is to match a packaged candy (made by creating a T- or L-match) with a striped candy, which will clear out a huge, cross-shaped swath of candy. 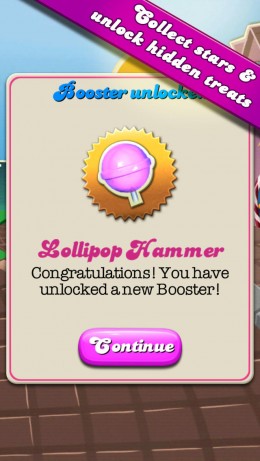 These can be a real pain. A certain number of cherries and chestnuts will be generated from the top of the screen, and you need to bring them down to the bottom. It seems like the game will only generate a certain number of ingredients at a time, so you need to move things in as few moves as possible. Like in the jelly stages, you need to focus on the goal here. Every match should be moving an ingredient down or making a special candy. Striped candies are again useful here, particularly the vertical ones. If you can get a vertical striped candy in the same row as an ingredient, congratulations, that one is done. Horizontal striped candies should be saved at the very least until they’re below the ingredients on the grid. Striped plus striped combinations are not as useful here, but packaged plus stripe remains an incredibly powerful combo.

In these stages, you need to reach a certain score within a time limit. Since you don’t have as much time to think here, the strategy is a bit different. Keep your eyes open for special matches, of course, but making matches of three candies is also fine here to keep things moving. Make lots of horizontal matches low on the board, trying to make chains. Whenever the +5 candies appear, make sure you pick them up. Like the original score attack stages, these ones are not usually too difficult, just make sure you realize you’re playing a timed stage or you might waste a life gawking at the screen.

These start appearing pretty well on into the game, and they can be nasty. You’re tasked with collecting a number of particular colored candies within a set number of moves. Once again, you’ll want to focus on your goal. You should only be clearing non-requested colors to clear the board or to create special candies. Pretty much every special candy is very useful here, even fired off individually.

That’s what I’ve got. Contrary to what I thought before playing the game (and at certain times during the game), Candy Crush Saga is navigable without spending cash. I will also, perhaps begrudgingly, admit that the game is kind of fun. Later stages are kind of devilish in their setups, requiring quite a bit of strategy to clear. The difficulty spikes only made me want to come back and win even more. I guess I can see why so many people enjoy it. I don’t think I’d recommend it over something like Scurvy Scallywags (Free), but if you are playing it, or decide to, I hope you find this guide useful. I also hope my grandmother is reading this so she can finally clear level 23.