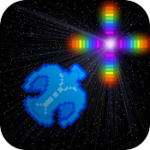 One of the many things I love about iOS gaming is how critical it’s been in the revival of one of my favorite genres from the past: the shoot-em-up. Several years ago, shoot-em-ups were pretty much down to just Cave’s excellent games, with the odd release here and there from others. Now, we’re pretty much drowning in them. Of course, like any healthy genre, there’s a lot of stuff not really worth your time or money out there, but, more importantly, there are a lot of games that are worth both. BlastTrax ($0.99) certainly tries to put its own spin on things, and while it’s not quite up to the variety of some of the better shoot-em-ups available, such as Dodonpachi Blissful Death ($4.99) or Phoenix HD (Free), if you don’t mind something a little smaller, you’ll still probably be pretty happy with what you get for your money.

BlastTrax comes from the same developer that brought us the well-known Spike Dislike ($0.99) and the criminally under-appreciated Sheep Goes Left ($1.99), and, like those, it brings a healthy dose of retro style to the proceedings. Your goal is to guide your ship to the end of brightly-colored tracks, shooting whatever gets in your way and collecting the gems they leave behind. You can only take so many hits before your ship explodes, but you can restore a little of your health by collecting a certain amount of gems. Collect a lot of gems, and you’ll get very useful power-ups for your firepower. 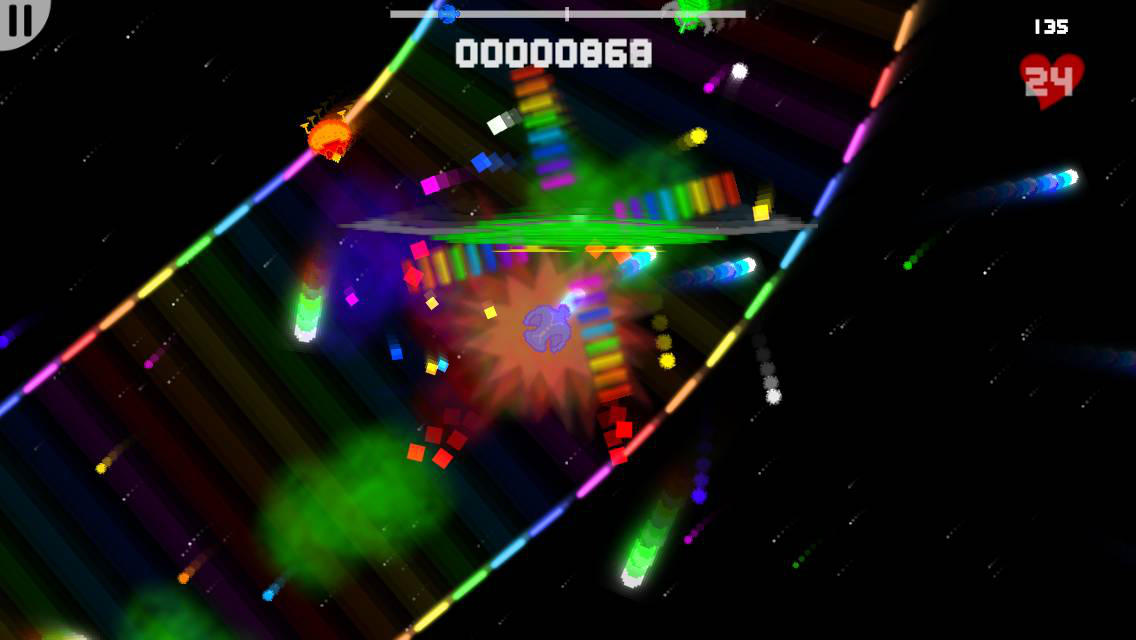 The game offers three difficulty modes, each with their own set of tracks. As much as your gamer pride might want you to pass on the Easy setting, it’s probably the best place to start. With its sparsely-populated early stages, you can get a feel for the way your ship controls. BlastTrax uses relative touch controls to move your ship. Turning in any direction is quick and easy, and your ship is automatically shooting at all times, so you really just have to worry about pointing yourself the right way.

There’s plenty of free real estate to put your finger down on, and you can play in either portrait mode or landscape, so even if you’re on your phone, you’re sure to find a way to play without your finger blocking too much. The difficulty modes are all pretty much as labeled, with Easy really only putting on the heat in the last few stages, Normal heating up pretty fast, and Hard tossing you right into the pressure cooker from the start. In total, there are about fifty stages to tackle. 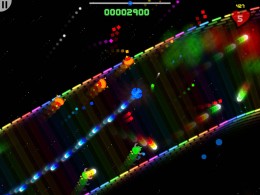 The basic strategy of the game is fight versus flight. You don’t need to destroy anything to reach the end of a track, and if you’re good enough at maneuvering, you won’t need to. On the other hand, while you risk taking more hits, stopping and destroying everything not only rewards you more points, but also gives you health restores and power-ups. The early stages are almost certainly easier to just run through, but if you do that, you won’t collect enough gems to give you the more powerful weapons. Trying to run through the later stages is extremely difficult, and without the powered-up weapons to give you an edge, you’re going to have a very hard time surviving.

The biggest problem with the game is the lack of variety. The power-ups are very rare, so you’re mostly playing the game with the same set of abilities you had from the beginning. Every track is visually identical, with the same rainbow colored boundaries and starry background. There are only three main enemy types, as well, and though the combination of the three in various quantities is more than enough to provide a strong challenge, it’s still not very exciting to be facing the exact same types of enemies from the mid-point onward. The music in the game is very limited, just used for intros and outros for each stage, but it, too, never changes. As a result of all of this, the game really doesn’t hold up well under long play sessions. It’s really ideally enjoyed in short bursts here and there.

Also, as far as I could tell, there’s no option to simply choose the stage you want to start on, nor are there any continues. If you lose your health, it’s back to the start for you. That’s fine, as it’s not a terribly long game at any difficulty setting, but the early stages are pretty dull after you’ve gotten used to the game, and having to replay them every time contributes greatly to the feeling of repetitiveness that sets in. To the game’s credit, however, it does have full support for leaderboards and achievements via Game Center. Trying to best your friends’ scores and collect all the achievements adds some sorely-needed long-term motivation to the game.

BlastTrax has a terrific visual style, at least, with color choices and sprite designs that call back to the C64 era of computing, but with a really trippy blur layer put on top of everything to give it a bit of a modern skew. It almost feels like a game from Jeff Minter, of Tempest fame. The sound effects and sparse music match the retro visuals nicely, making the whole thing feel like a buffed-up 8-bit shooter. While it’s not the first or last shoot-em-up to take that approach, this game truly owns that heritage, even down to the gameplay, so it never really feels like a gimmick the way it occasionally does in other games.

So, who is BlastTrax for? If you’re looking for a fairly simple shooter, have an appreciation of retro/8-bit style games, and are looking for more a “snack" shooter than a full-course meal, you’ll want to give this one a look. This isn’t as substantial as the developer’s other works, but the game still plays well and does what it sets out to. Its scope is small but if you’re fine with that, you’ll have a good time with this one.