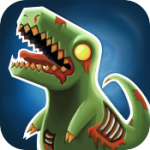 Believe it or not, Halfbrick made games before Fruit Ninja ($1.99) blew up to the point that it was so huge it was scoring movie tie-in deals. Age of Zombies ($0.99) is the ancient (by today’s standards) dual stick shooter by Halfbrick that recently got updated with iPhone 5 support.

It’s a lot of fun, and it’s pretty cute that the game is old enough that they needed to include a tutorial that includes the basics of how a dual stick shooter works. Ahhh… How times have changed.

If you haven’t yet, now is as good of a time as any to download Age of Zombies. If you’ve deleted the game since its original release in 2010, maybe it’s time to give it another shot as it has aged surprisingly well.