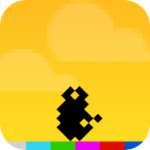 What the Frog ($0.99) is all about high energy, which means you’re probably not going to get a long-term commitment out of German indie developer Philipp Stollenmayer’s newest app. It has a neat hook, though: Players place their device flat on a surface and tap their finger next to it to control the character onscreen. That’s it. Even with only one mode, it’s lovable — frogs, washing machines, and all.

What the Frog might star a low-resolution frog named “What," but he’s only one of several characters available to choose from once you start achieving higher scores. Players begin with the hoppy green critter and bounce him around on brightly colored vertical rectangles of different heights. Every well-timed vibration from your finger makes the frog leap higher and faster, especially when maintained at a continuous pace. Consecutive jumps that increase in length and height are key to completing many of the objectives. These are quick-fire goals that are easy to fulfill as long as you can make good time and master the physics, which are easy to learn.

Tasks appear as text on the top of the screen and float downward as you attempt them. Take too long, and the word “concentrate" will appear and fall, signaling the final seconds before it’s game over. Success is tracked either by numbers out of a total or with written judgements, all of which fluctuates onscreen as you play. In turn, each exercise counts toward a higher score and brings you closer to unlocking other characters. 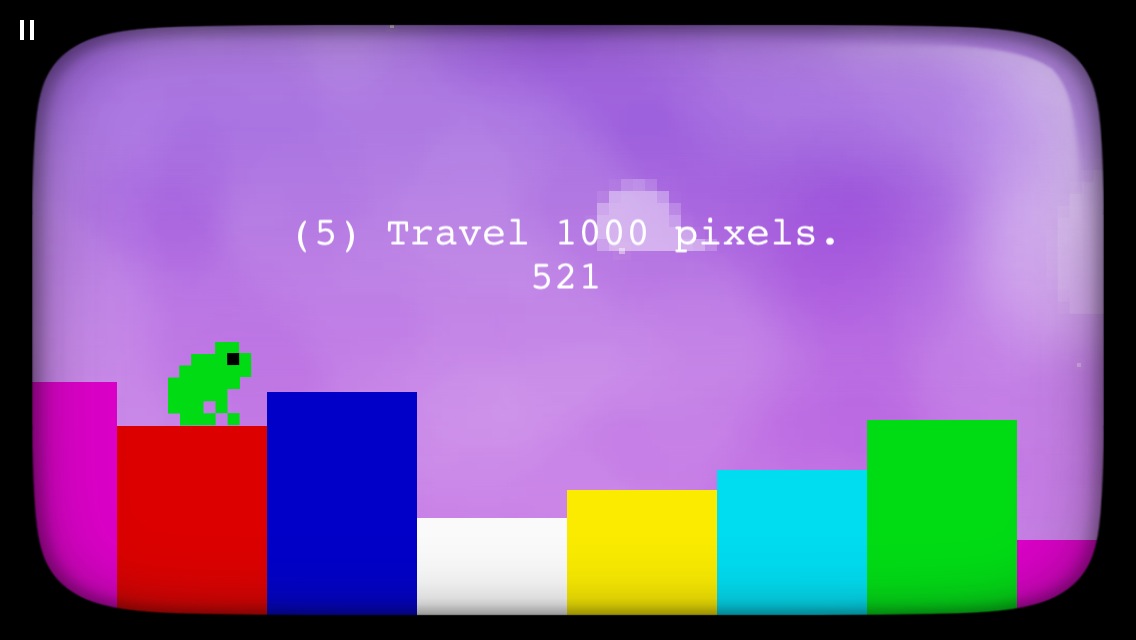 The objectives are all silly but surprisingly fun, from traveling so many pixels forward or upward to jumping over “hills," breaching large gaps, catching thieves, breaking or hurtling over Ming vases, knocking over bowling pins, and sitting on a couch. Just try pulling that last one off as a margarita pizza that refuses to stop rolling.

The geometry is part of the challenge, especially when a lot of tall and short rectangles are stacked together, making the terrain difficult to traverse. It is possible to get stuck in a gap and have to start over, although I only ran into this problem a couple times. The most difficult trial for me was gaining enough distance by traveling backward, which requires some tricky maneuvering for sure.

Even though you can raise or lower the sensitivity, tapping your finger against a flat surface to jump isn’t always as effective as you’d like. I cranked my sensitivity all the way up and still had trouble gaining momentum sometimes. It’s certainly not a mechanic where you need to punch through a table to get it to work, but it could use a little fine-tuning. Otherwise, getting a streak going involves timing taps just right when the character is about to hit ground again.

But What the Frog is enjoyable, and it’s funny, too. My favorite task is “listen to the guy," where you come to a stop as close to a rectangular person as possible to hear him spout lines like “I hate karate" and “Are you Asian?" Ridiculous.

As for characters, I found the frog the most versatile even if he is the first one you acquire. He’s springy and a good shape to roll with, and he changes colors as you progress and do better. Every character — like the bicycle and front-loading washing machine — has its own advantages and disadvantages, and some are better equipped to handle certain challenges than others. Experimentation is how you’ll learn.

Another fun touch is the autopilot bonus. Basically, if you jump high enough to smack into a bird (think the simple, wavy-line kind you learned to draw when you were 5-years-old), you get maybe 10 seconds to sit back and watch the game play itself. It guarantees you’ll survive for a little longer, which may be exactly what you need to reach that next high score and free up another character.

One of the App Store screenshots says a touch mode is included, but I had no idea how to activate it while playing, if it’s even available yet. Tapping the screen only pauses the action, allowing you to switch characters, restart, or visit the Game Center.

What the Frog is goofy, but it’s a fun concept whose gimmick succeeds more than it fails. The sense of progress while playing is measurable, and the five achievements offer just enough to support the length of the experience. I urge anyone in the forums who passed it over to give it a try. A dollar gets you everything, and there are no in-app purchases or ads to contend with.