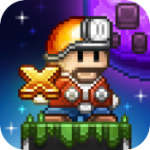 It’s been an insane week, especially with Terraria ($4.99) and Junk Jack X ($4.99) launching within an hour of each other. Since then, in every comment thread imaginable the debate has been raging over which game is better, and while I’m still holding fast to the idea that if you’re interested in these Minecraft-likes you should totally get both… If you had to get one, we’re leaning more and more towards Junk Jack X. We’re talking a real photo finish here too, as both games are incredible, but what’s putting us ever-so-microscopically-over the line in Junk Jack X’s favor for the Game of the Week nomination is two major things.

First off, it’s not a port and features native touch gestures for controls. As cool as Terraria’s zoom functions are concerned, it’s increasingly transparent that you’re working with a virtual mouse pointer- Particularly as you find yourself trying to build more intricate things without screwing up. Most importantly though, multiplayer in Junk Jack X is amazing. Take a look at my first multiplayer session with Jared:

Sure, Terraria has tons of discovery and other neat things in it as well… But there’s just something about playing these games with a buddy and discovering those things together. Multiplayer Minecraft has always been my favorite way to play, and Junk Jack X has all those same feelings flowing my direction.

Where we’re sitting right now, if you can only get one, I’d grab Junk Jack X.