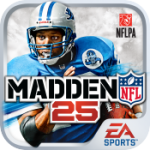 While Madden NFL 25 (Free) is far from what a traditional football video game, there are likely folks out there that will want to play it for its social spin and team deck building mechanics. Unfortunately, those mechanics come with a lot of elements that push players towards IAP, as we described in our review. Thus, the purpose of this guide is to provide some explanation as to what types of IAP are offered in Madden 25, whether they’re required to adequately enjoy the game, as well as tips to help folks avoid having to shell out for (or, if you must, the most efficient ways to pick up) the IAP.

There are two aspects to Madden 25: the game’s Solo Challenges and the multiplayer. When it comes to the Solo Challenges, it is possible to slowly make your way through the challenges without IAP, although players will find it highly tempting to spring for some premium currency to pick up some card packs rather than slowly grind for coins. In regards to the multiplayer, being essentially an upgraded version of the now defunct Madden Social, there isn’t really much of an end-game other than eventually collecting the ultimate team deck and going to town in the game’s multiplayer. In this regard, IAP may border on necessity, especially with the nature of the game’s blind player packs. 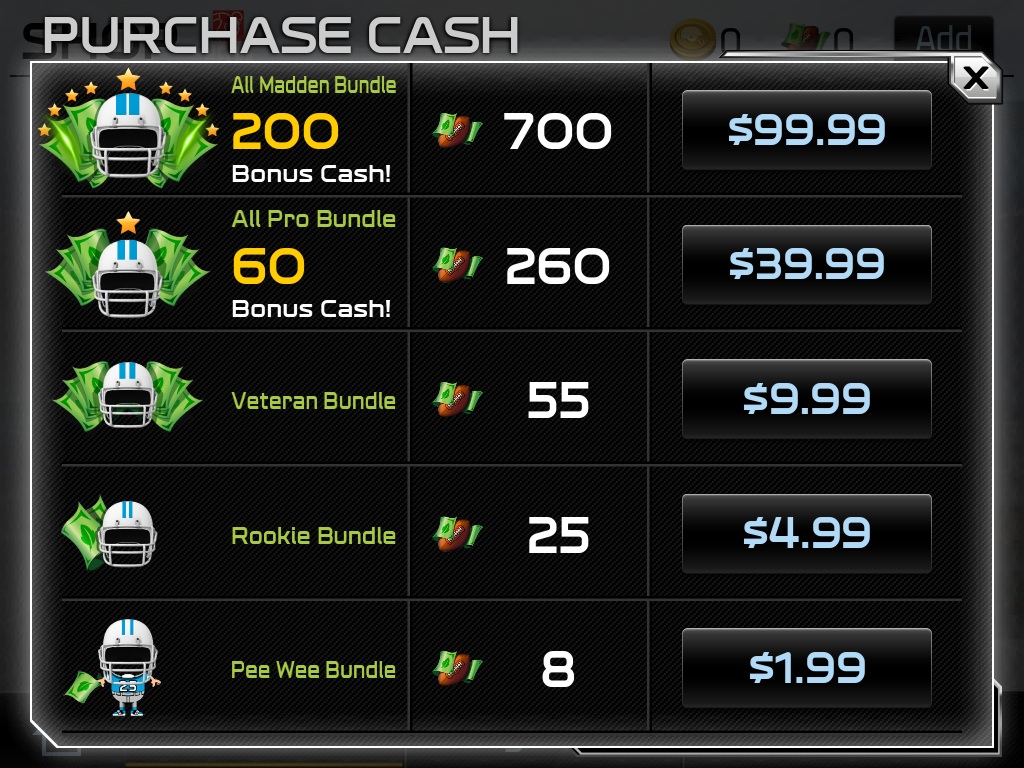 As you can probably guess from our previous section, the answer to this is close to “nearly everyone." However, in an effort to try and be a bit more specific, we’ve classified a few types of players that might particularly need IAP for various reasons:

Multiplayer Aficionados: Assuming the game’s matchmaker system works as it should, novice players should be able to play the game’s multiplayer against evenly ranked opponents, building up experience and currency until they are able to upgrade and face better opponents. However, in my experience, that doesn’t really seem to be the case. So, folks looking for a quick upper hand, or players that want to be able to quickly get through the Solo Challenges and earn some reward cards, may have to spring for the IAP necessary to get a few card packs, rather than waiting and earning them through the normal currency routes.

Collectors: If you’re the type of player looking to for specific team makeup or just gunning for the highest ranked teams, Madden 25 puts you in an interesting situation. The in-game auction house takes only normal coin currency, and there isn’t (at least at the moment) any type of conversion tool in the game that changes premium currency to normal currency. Thus, if you see the ultimate card on the market place, you’re going to have to save up it by winning games or by buying card packs. Notice I didn’t say you had to play the games, as Madden 25 literally has an auto-win button for games against the AI and that requires premium currency. Either way, IAP will make the journey towards your cards of choice that much easier. 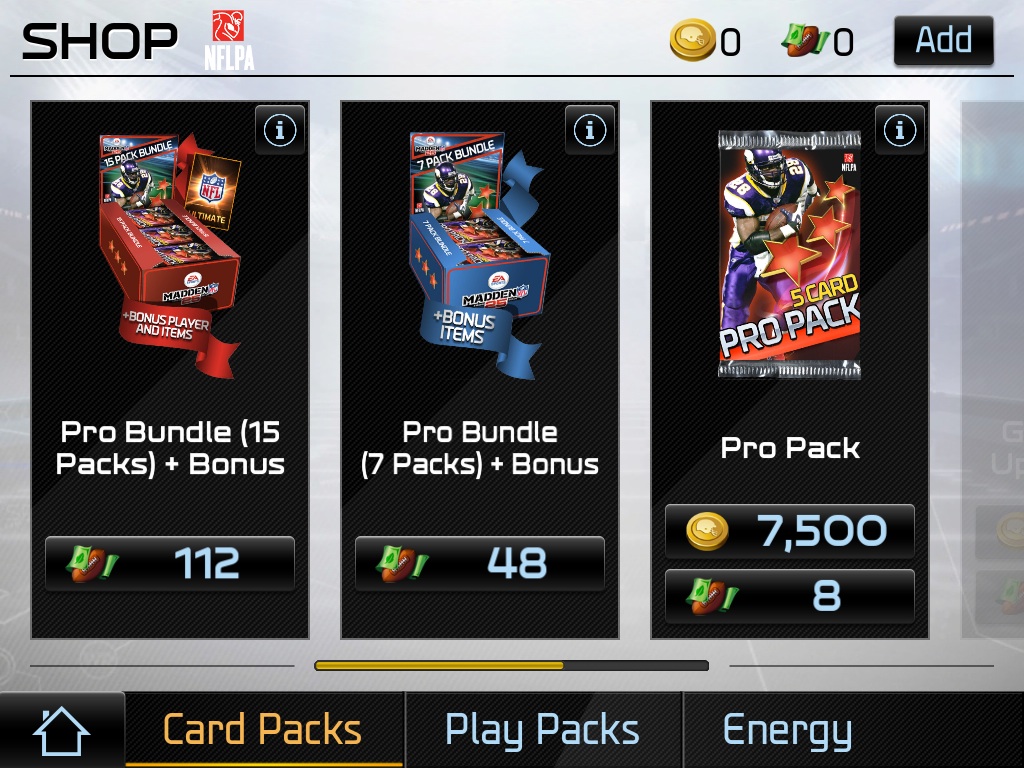 As simplified as Madden 25 is from a gameplay standpoint, there aren’t too many tips for how to play the game. However, the following are some loose guidelines that might be able to have you improve your team and level up more efficiently.

Hold Off On Head 2 Head Matches Early On – One of Madden 25‘s most compelling features is its turn-based asynchronous multiplayer mode, which is called Head 2 Head. In it, you take on friends (or randomized players)  by taking turns going on offensive drives, with each drive costing one point of energy. Matches are played with each player’s best team, meaning that someone that has played a ton and earned a lot of higher tier cards will almost always win out against a newbie. While scoring points and winning games nets a decent amount of energy, losing doesn’t offer nearly as much. Thus, I’d recommend holding off on Head 2 Head unless you’re playing against a friend you know is also starting out or until you play some of the other modes and build up a better team.

Solo Challenges Are Important – One of the best ways to get your team in fighting shape  is to take on the Solo Challenges. Not only are they a decent way for starts to earn some early currency and experience, but you can also get some good cards at the completion of each ‘Season.’ Assuming your team has a high enough rating for the game at hand, you can’t go wrong with doing a solo challenge.

Play the Auction Early and Often – While Solo Challenges can get you some cards at the onset, the auction will be your bread and butter until you can really afford the pro packs. Sure, the really high end cards will usually be prohibitively expensive, but you’ll be able to find some decent silver and gold cards at low prices that can boost up position. I’d suggest always checking the auction when you have a chance, although don’t spend all your money on it.

Beginner Packs Lose Their Weight Early On – Beginner packs sound appealing at the onset, because a gold card is always guaranteed. However, the other cards in the pack are usually not good and in general I found purchasing the pack not worth it. If you’re beginning, it doesn’t hurt to buy a pack or two, but in general I’d recommend saving your cash for pro packs or the auction. 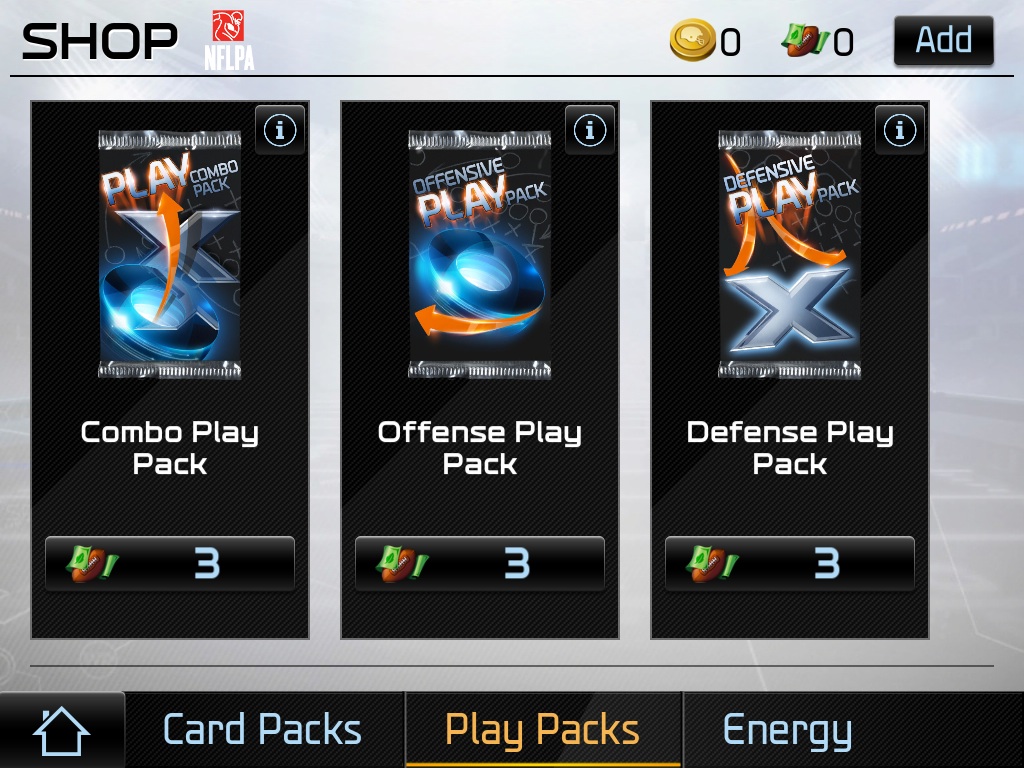 How You Play Matters –  At the conclusion of each game, you get currency and experience for participation (i.e. completion) and extra points if you win. Another bonus is you actually get additional money for how many yards and points you score. So, if the opportunity arises you want to run up the score as much as you can. Sure, the bonus isn’t too much, but every bit counts.

Replay Old Solo Challenges – If you’re in a crunch, one way to earn some quick experience and currency is replaying solo challenges. While this isn’t a particularly bad idea, just remember that it takes up a significant amount of energy per game and the amount earned back (even with a win) isn’t as efficient as a good multiplayer match.

Manage Your Energy – All games that matter take energy. While it’s good to keep some energy around to actually play games, it doesn’t make sense to horde it. If you’re near the max, it’d make sense to play some games so that way during your off-time you’re slowly recovering energy. Also, if you find yourself near a level up, I’d suggest playing a solo challenge — it takes more energy but it’s going to be replenished anyways so who cares? 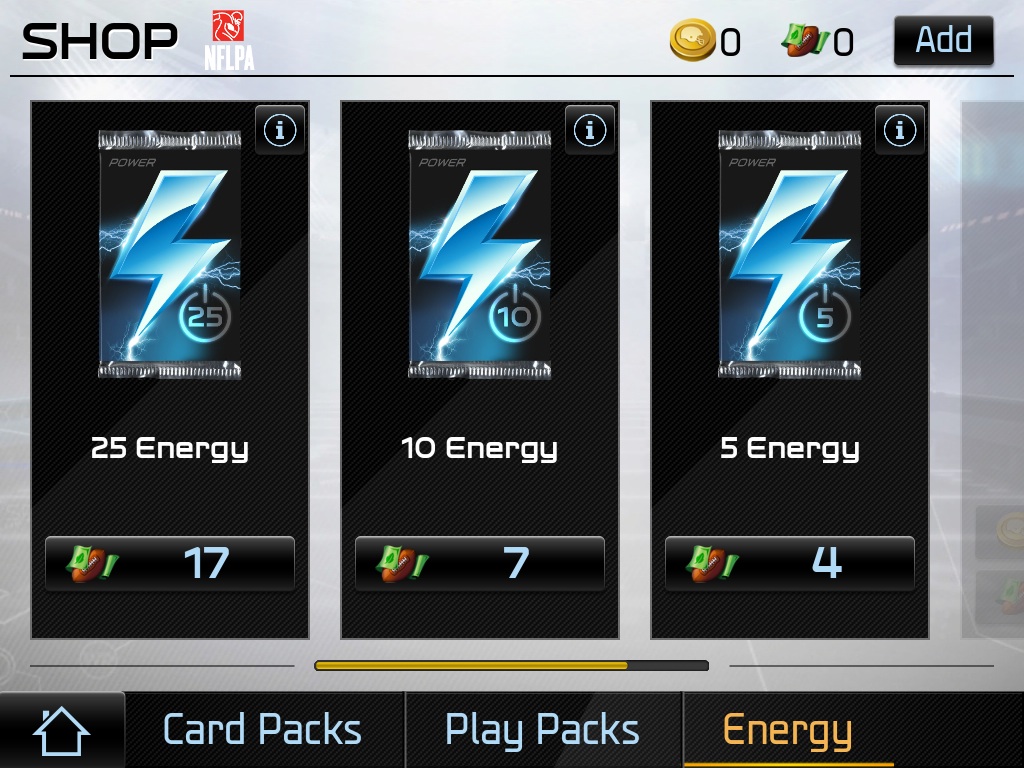 In theory, the majority of the content in Madden 25 is available without having to resort to IAP. However, such a road can be long, arduous and has the potential to be frustrating. So, assuming IAP is in your future, here’re a few tips you can utilize.

The Gold Starter Upgrade Pack Is A Steal With Premium Currency – If you plan on using IAP, I’d highly suggest picking up the Gold Starter Upgrade Pack at the beginning of your career. The amount of premium currency it takes costs less than $1.99 (current market rate) to purchase, and the cards you get are a great (and relatively cheap) way to get a leg up on your base team. Just remember to only get it once (as the game warns) as the pack isn’t randomized.

Instant Wins Are So Not Worth It – The amount of premium currency required to instantly win a game against the AI is so ridiculous from a value standpoint that I can’t really think of a reason why it’d be worth it. If you’re having trouble winning Solo Challenges, it’d make far more sense to use your premium currency to quickly purchase some pro packs and upgrade your team. Besides, if you don’t actually want to play what little actual football the game offers, what’s the point?

Madden 25 may not be the football game everyone wants, but the social and card aspects are at least vaguely interesting. While this guide can’t stop the impending freemium grind, it should be able to help you plan out your team’s upgrades in a more efficient manner.