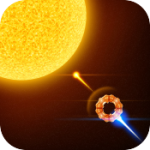 Solar Flux HD ($8.99) sends you off into space, alone on a mission to refuel the many stars of the galaxy. Over the course of 80 levels you go out, leaving the safety of your space station with a gentle slingshot, collect fuel (called flux), and shoot it into dying stars. You keep them from going nova, keep them from collapsing, keep them from burning out.

This idea is intoxicating, that we could one day be responsible for the fate of stars themselves. You’re out there on the rim, alone with a moody, ambient soundtrack that’s just right for the loneliness of deep space. The hazy nebulae, the deep shadows cast by planets and asteroids, the bright flares from the stars— it can be a beautiful experience. Even the interface plays its part, flickering as though it could be wiped out by magnetic spikes.

A minor irritation, though: the loading between levels is long and silent, jarring an otherwise meditative mood. 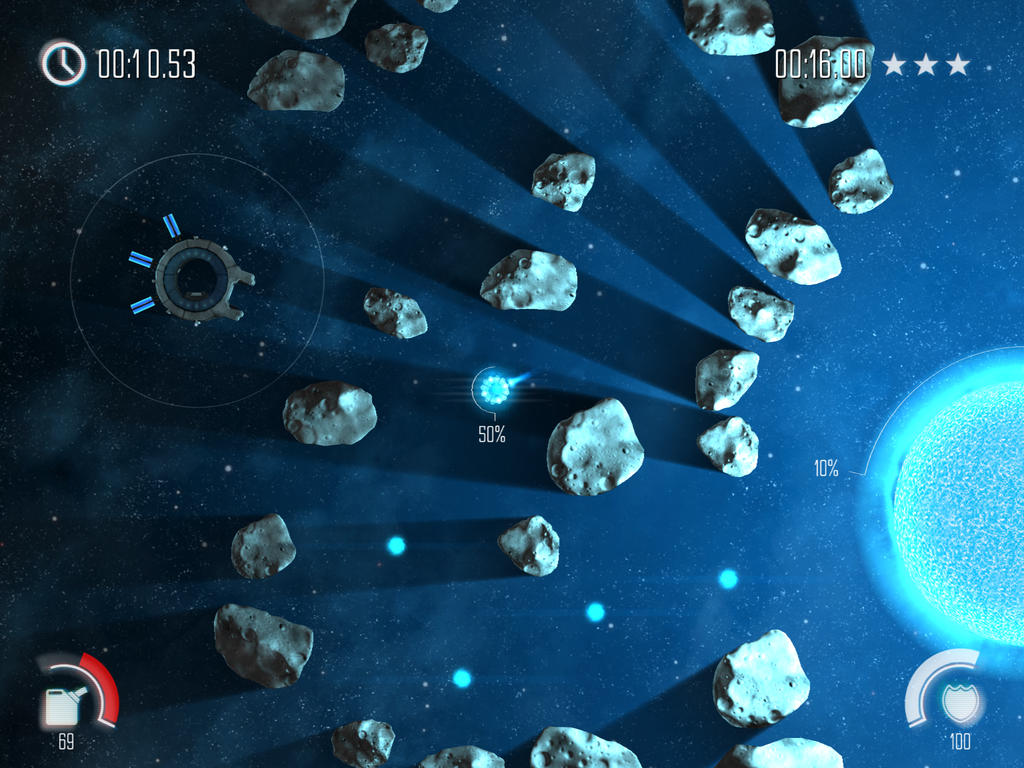 This is a physics puzzle, and the physics of space are both your friend and enemy. Gravity is not quite what you might expect, but it’s internally consistent. You’re subject to inertia, and you have to account for it when tapping away at your thrusters. Objects in space will pull you in, solar flares will push you out. Black holes will crush you and you’ll burn up from the heat of the sun. But you can also make use of those things to pull off amazing solar acrobatics.

Every level requires you to pay close attention to one of the meters that measure your existence. Some levels need to be completed within a certain amount of time. In these, the suns often work against you, pulsing you immediately and consistently off course. Others require you to mind your shields and damage, hiding behind planets to cool off, avoiding orbiting too close. Shields are always a consideration if you don’t want to explode mid-level, but in those particular levels more than most.

The third kind of level asks you to conserve fuel, so you need to be clever about riding the flares. You might fire your collected flux off at just the right moment to ride the resulting flare in the right direction to do it again with the next sun. In many of these, using even a drop of fuel will lower your star rating, and while it might be easy to refuel the sun, it can be near-impossible to earn a full three stars.

That difficulty could be the game’s biggest strength, depending on your point of view. It’s hardcore about its puzzles, both in reasoning and execution. At times you’ll need to be terribly clever to get through a level with all suns restored. More often, you’ll need to be extremely precise, hitting just the right angle on your initial shot, firing flux at the exact right moment, planning for flares to conserve your fuel and time, and predicting your orbits to protect your shields.

You can still make your way through if you’re not quite that good, and one-star ratings aren’t shameful. Well, mostly. It’s not great when you know there ought to be a way to get through a level without using your fuel but have no idea what it is, or to know and fail on the execution. Solar Flux HD can make you feel both smart and skilled when you’re doing well, and terribly outmatched when you’re not. At least it tracks personal bests, for those of us who can’t swing three stars. If you’re really stuck, you can even pay to unlock new worlds.

Hopefully you’ll never get quite that stuck, but saving the galaxy is a challenging job. It can be a frustrating one, too, but the atmosphere Firebrand Games has crafted helps sooth that hurt. If the fate of the stars gets to be too much for you, sit back and listen to the music of the galaxy for a while. Solar Flux HD will have you back fighting entropy in no time at all.