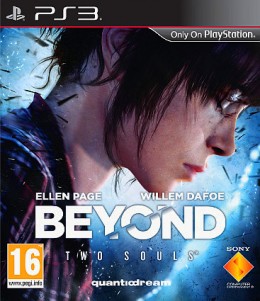 Here’s something that’s only marginally related to what we typically talk about on TouchArcade, but was too interesting not to share. The upcoming PlayStation 3 title Beyond: Two Souls, starring big-time movie actors Ellen Page and Willem Dafoe, will feature the ability to use an iOS and Android device to control the game, Joystiq reports.

Using an app called “Beyond Touch" on your smart device will turn it into a simple touchpad-like controller for Beyond. The console game will recognize the app is in use and automatically flip over to “easy" mode, and there’s no onscreen virtual buttons or sticks to fiddle with on your device, simply a blank screen that moves your character in Beyond by touching and dragging.

Beyond developer Quantic Dream is aiming to make the game more accessible to an audience beyond those who are already familiar with playing games. I think we’ve all had non-gaming friends who express intimidation at today’s modern controllers with their many buttons, triggers, sticks and other doohickeys. Those same people are by and large are already pretty familiar with smartphones and tablets, though, so giving them an easy way to enjoy a heavily story-driven adventure like Beyond without worrying about fumbling with controls could be an awesome jumping in point for them into the world of gaming.

It’s a really interesting tactic and I’ll be curious to see if this sort of thing becomes common with other console or PC games. If you’re interested in checking this out for yourself, Beyond: Two Souls will be available in October, and we’ll keep our eyes peeled for the Beyond Touch app to hit the App Store at or around that same time.