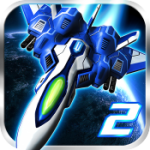 Before we get started, it should be pointed out that despite the title, Lightning Fighter 2 (Free) ain’t so much a sequel as it is a remix of the original.

In Lightning Fighter 2, the environments, enemies, weapons and ships are the same as in Lightning Fighter ($0.99), the differences being updated visuals for retina displays (in the HD version), a few extra spacecraft (with their own unique weapons), additional music tracks and updated enemy attack formations and animations. The IAP system plays a much larger part of the game in this “sequel", too.

Lightning Fighter 2 is an impressive beast in both the visual and aural departments. The backdrops are simply gorgeous and incredibly detailed. Although everything is decidedly two-dimensional, the quality of the renders is top notch. Similarly, the soundtrack is superb and reminiscent of arcade shooters form the likes of Treasure, a nice break from the over-used bad dance music that often accompanies games of this ilk. 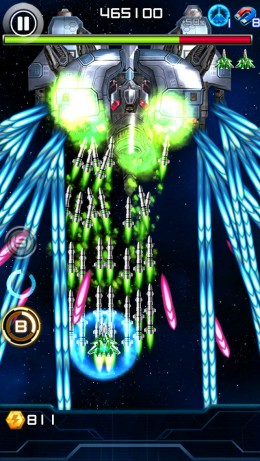 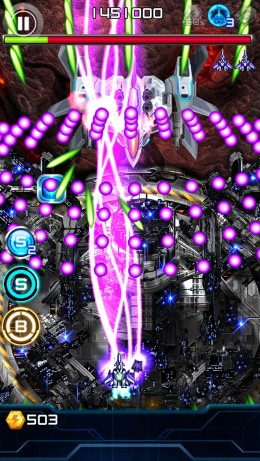 Play-wise, Lightning Fighter 2 is your standard fare iOS shooter. You control your ship by way of adequate, though not perfect, relative touch controls and also have icons for super attacks and bombs.

Unlike the ‘prequel’, bombs and special attacks have to be purchased. Each ship does have its own inbuilt special weapons (they differ, depending on current weapon) that can be charged and unleashed, but if you want said powers available from the get-go, you’ll have to equip your ship before you start each game. Luckily, any weapons or bombs equipped do carry over into following attempts, should you meet your maker prematurely.

Whilst you will earn enough coins to keep your ship reasonably stocked with special attacks, shields and bombs, gathering enough moolah to buy new spacecraft is a whole different story. 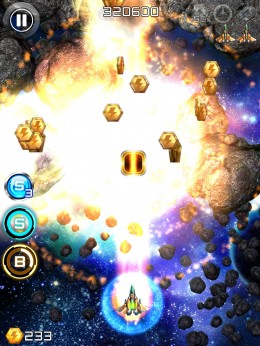 The first ship available to purchase is relatively easy to obtain, as it only costs 15,000 coins. Every ship after that will take more time to earn than gaining a PHD in astrophysics, as they range from fifty to 500k. You can of course choose to use real-world money to add to your virtual wallet and that’s pretty much the only sore point I have with this game… it just costs too much to obtain all of the available ships and I’m not even sure that they are worth having.

Each ship offers up several weapons (selectable by collecting icons dropped by enemy ships), usually consisting of at least one of each of the following: a spread shot, missiles and some form of homing projectile system. I actually found the first ship to be perfectly capable of handing out some meaty alien whup-ass and even after I’d gathered enough coinage to buy myself a shiny new vehicle, I still found myself returning to the original, so as to avoid that annoying pink lightning weapon that aims in the direction of your ship’s movement.

Playing through the game, I didn’t gather enough cash to unlock the later ships, as I was spending it when I could on upgrades to help complete the levels and I wasn’t prepared to spend my real money to buy new ships after feeling a bit let down by my first ship “upgrade".

On top of the weapons and ships, you can purchase continues and coin gathering aids, but these are obtained by spending gems, which are about as easy to acquire as unobtainium. You can buy gems with real money too and to be fair, if you keep your ship stocked with shields, bombs and special attacks, you should be able to progress through the game without needing to spend too many precious jewels.

As far as bullet hell shooters go, Lightning Fighter 2 is a bit on the easier side of the scale. There are only seven levels to play through, though each one needs to be completed three times, as the game is split into bronze, silver and gold difficulty levels, which need to be played through consecutively. I can’t help feeling that this is a bit of a cop-out way to flesh the game out, artificially increasing the playtime. The repetition of the stages isn’t too bothersome, as the action is hard and fast and you don’t have a whole heap of time to sit around thinking “Oh, I’ve already done this".

At the end of the day, Lightning Fighter 2 is a piece of eye candy with enough substance to keep you chewing for a reasonable time. The enemies and environments are well designed, there are more bullets flying about than there are slow-motion helicopter shots in a Michael Bay film and the boss battles are suitably epic.