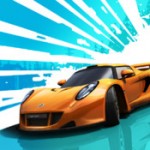 Hutch‘s Smash Bandits is a neat twist on the Smash Cops brand. In Bandits, you play as a dude running from the cops. Your task, naturally, is to avoid being captured, but you’re also responsible for creating as much chaos as possible during the chase. You get points for smashing into obstacles, for example, and generally putting on a good show. If Smash TV and Burnout had a child, this game would probably be that child.

As you earn points, you can use them to upgrade the speed, handling, and smash power of your car. You can also buy new, sleeker cars, too, and gadgets that give your car crazy special abilities. Each upgrade really goes pretty far. Your runs extend by minutes and the amount of smashing you can get away with gets ridiculous.

It’s of note that this is a free-to-play joint. You can buy these points or the game’s control currency with real dough. Also, after a point, your wanted level gets too high to do runs right after the other — according to our forums, you’ll be asked to pay a “lawyer" to turn down your heat or you’ll have wait a couple of minutes to play again.

Another note: this thing controls really well. To accelerate, you put a finger behind the car and press. To turn, you move that finger around, throwing the car into a bunch of cool-looking slides. The UI is tremendous, too, and perfect for iPhone and iPad.

We definitely suggest you give Bandits a try when it hits later tonight at around 11PM EST. It’s a blast for what it is, and definitely does something unique in the racing genre on FingerPad devices. We’ll have more on the game in the near future, too, as it releases around the world.