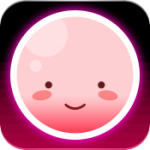 Let me come right out and say it – it’s games like DOT Space Hero ($1.99) that are the reason I love iOS gaming. As you know, the beauty of the App Store is that practically anyone can release a game. Sure, while 99.9% of the titles released are nothing more than boiled cabbage covered in burnt hair, every once and a while, there is a true (cue incredibly overused descriptive noun) gem.

DOT Space Hero is a new take on an old genre. Combining traditional 2D side-scrolling shooting with a control scheme akin to that found in Jetpack Joyride, 1 Coin Studio has created a perfectly balanced, beautiful and charming little retro shmup that old hands and noobs can enjoy in equal measures.

The story sees our hero, DOT, who looks to be a baby stuffed inside a fish bowl, on a mission to find who stole his precious stardust – a delicacy in his part of the space woods. The story is cute and brilliantly narrated by the sporadic cut scenes in glorious, lovingly hand-crafted paintings. The visuals are a real treat but by no means are where the great design ends. 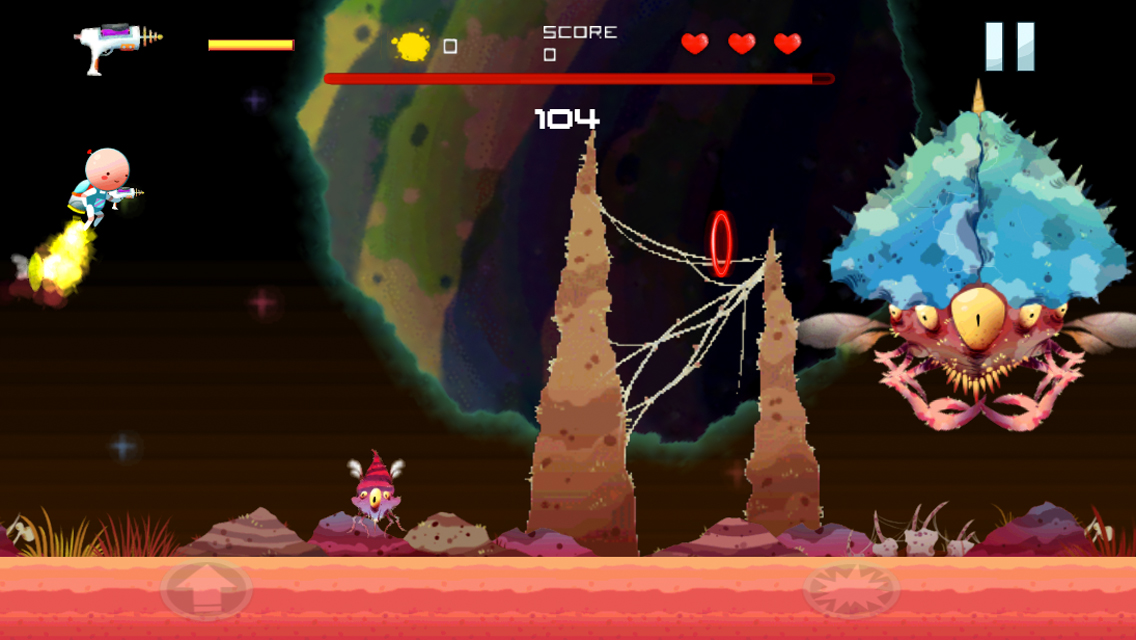 The levels in DOT Space Hero seem to have been hand-sculpted from a rather large wad of pure talent-clay. The enemy waves, obstacles and power-up placements have been so well thought out and the gameplay so beautifully balanced, you’d be forgiven for thinking you’d stumbled upon the latest offering from the likes of Nintendo, rather than a two-man team who met on the Unity 3D forums with the single ambition of making their own videogame.

DOT Space Hero is the perfect example of why quality is better than quantity. The game is not overly endowed in the length department but it makes up for its modest volume with oodles of challenge. DOT is set across three planets, each split into three areas. The first two areas see you flying left to right, ridding the world of the alien scum and collecting stardust, all whilst trying to avoid the various nasties such as bouncing asteroids, lightning fences and aliens who are rude enough to biff your bullets back in your face. 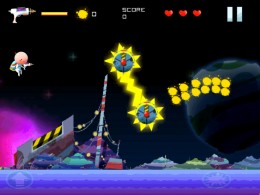 From time to time, enemies come along who release weapons upgrades when killed. Upgrades range from the standard increase in blaster power to limited run heavy weapons such as flame throwers and giant balls of gum. The standard blaster features unlimited ammo but if your trigger finger gets a bit too eager, you can overheat the weapon, so best keep an eye on that gauge.

DOT starts out each stage with three heart icons that represent his shields or “hit points" – standard retro stuff. Three hits and DOT will have to start again, though from time to time, life upgrades can be collected.

At the end of each planet is the obligatory boss battle. As with the rest of the game, the boss characters are stunningly drawn and provide just the right amount of a challenge to get the heart pumping but not so much as to get your iOS device hurled through the air in frustration.

Upon completing the planets, there are bonus stages which are used to collect stardust by moving up and down in your bubble-like spacecraft and after defeating the boss on the final planet, an extra area is unlocked. The gameplay is nicely varied, from the traditional shooting side of things through to the collect’em up and avoid’em up segments, it never gets old or repetitive.

Sound wise, the music and effects match the visual design brilliantly. The music is suitably atmospheric and the effects capture the classic shmup feel with familiar blips beeps and bangs.

DOT Space Hero is a charming, beautiful and most importantly, amazingly fun little iOS shmup. While there are many shooters available in the App Store, 1 Coin Studio has gone that extra mile to make sure that DOT is not only an excellent game, but an excellent game that has been designed around the iOS touch interface, rather than the other way around. The result is a truly wonderful piece of art that at this point I really cannot fault. Don’t let the seemingly low number of stages put you off – you won’t be breezing through DOT Space Hero and even once you’ve completed the game, you’ll be coming back for more, if only to achieve triple stars on each stage by collecting all the available stardust (no mean feat) or improve on your Game Center leaderboard stats.

1 Coin Studio wanted to make a game that captured the essence of the 16-bit shooter and rewarded the player for skill, rather than offering up content in the form of IAP. In a world of ever increasing pay walls, to me this is a welcome business model and I hope it pays off for this team, as I really want to see what other digital miracles they have up their sleeves.