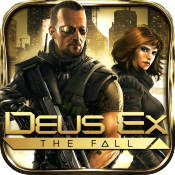 When Deus Ex: The Fall ($4.99) released last month, it blew the minds of a lot of people by offering a very Deus Ex experience in a very mobile package. It also tied into the world and story of the critically acclaimed Deus Ex: Human Revolution on consoles and PC as well as that game’s prequel novel ‘Deus Ex: Icarus Effect’, making it a real treat for fans of the series who were really engrossed in the universe. Also, it was just a damn fun shooter in its own right, though a bit short. We really enjoyed The Fall in our review and are very much looking forward to more content.

However, not everyones minds were able to be blown by The Fall. The first group left out in the dust were owners of jailbroken iOS devices who, in Square Enix and Eidos Montreal’s effort to curb piracy, were unable to even fire a weapon in the game. Since not all jailbreakers are pirates, this meant that a good number of paying customers were essentially locked out of the game, a move that didn’t go over so well. Squeenix and Eidos quickly changed course on that tactic, and an update was issued that resolved the jailbreak prevention measures.

The other group unable to enjoy Deus Ex: The Fall were iPad 2 owners. Upon release the game’s description noted that it required an iPad 3 or above, but also said that it supported the iPad mini. Since the iPad 2 and iPad mini are darn near identical hardware-wise, this seemed like a strange move. Again, though, Squeenix and Co has listened to feedback and today a new update was issued that finally makes The Fall compatible with the 2nd generation iPad.

Also part of this update is an improved enemy AI which will no longer lose sight of you once you’ve been spotted. The AI has always been a sore spot in The Fall, and one of the biggest things that could pull me out of the whole experience is when an enemy would watch me duck behind a corner literally right in front of them and then just go back to normal like nothing had happened. It was like playing peek-a-boo with a baby, and when you cover your face with your hands the baby actually thinks you’ve disappeared somehow.

I haven’t spent a ton of time checking out this new AI but I’m glad it was something that was on the developer’s radar and is being addressed, because just about everything else in Deus Ex: The Fall is top-notch otherwise. I just want more of it, like, yesterday.