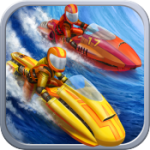 In October 2011, iOS saw the release of Riptide GP ($0.99), a water racer with an emphasis on showmanship. Now a year and a half later developer Vector Unit has seen fit to release a sequel. Continuing with the same great gameplay, Riptide GP2 ($2.99) offers more vehicles, tracks, and an improved visual and physics system, making it simply a great sequel for fans looking for more.

If you played Riptide GP, this sequel will feel pretty familiar from a gameplay standpoint. Sure, there are new race types and a lot more races to compete and win in, but the actual racing itself remains the same. Thankfully, this means that the same responsive controls, fast gameplay and trick/boost system make a return. It’s a good thing too, because GP2 doesn’t mess around from a difficulty standpoint. Unlike other racing games that have a tendency to rubber-band the AI opponents to ensure every race is competitive, Riptide GP2 does a great job simply rewarding (or punishing) players for their skill and attributes, providing more of an incentive to improve one’s entire skillset rather than just hanging around hoping for a random advantage. 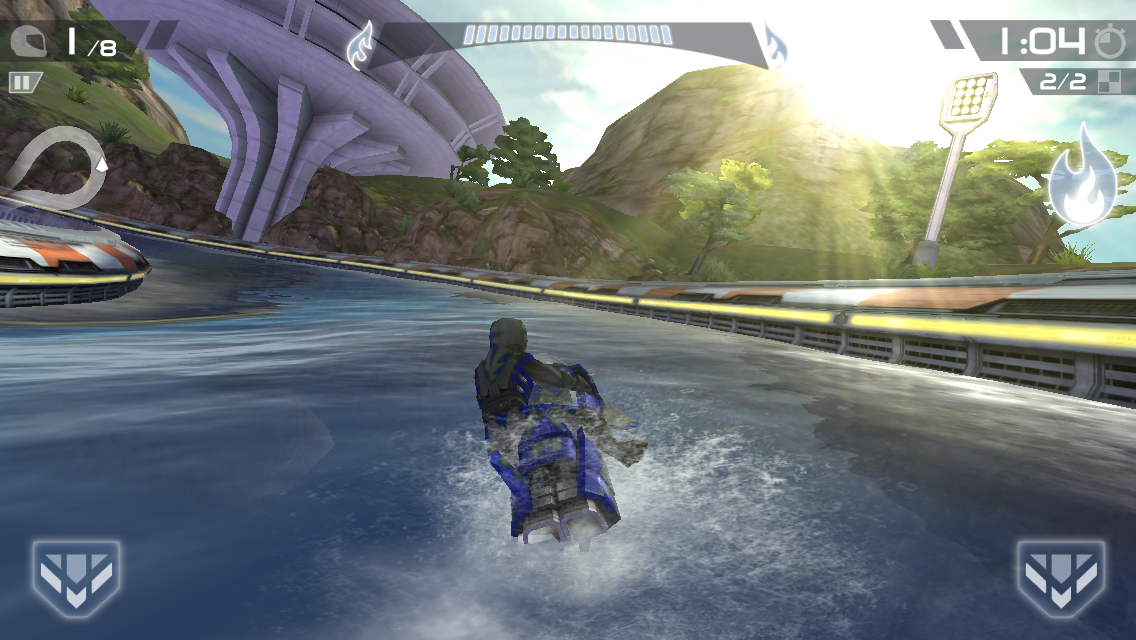 While there’s a lot that GP2 (thankfully) preserves from its predecessor, the changes and improvements it does make are what keep it ahead of the pack. The inclusion of a deeper career mode is a godsend for replayability. In addition to earning money to upgrade and purchase new hydro jets, players also earn experience which eventually awards ‘sp’ with each level up. While money goes towards improving your raw racing statistics, sp is used to unlock new tricks or improve your driver’s fundamental trick stats. It’s a great system and offers some important decisions that should be made based on play style (i.e. emphasizing more boost per trick vice unlocking new tricks).

Other improvements such as a slew of new tracks, tricks and the inclusion of online multiplayer are more prerequisites in today’s gaming world than groundbreaking additions. Still, I was pretty impressed with the tracks offered, as I found myself simply staring at the backdrops on occasion (a bad move while racing at fast speeds). While I would have preferred a more robust online multiplayer experience, I’d still rather have what GP2 offers than nothing at all. Meanwhile, the new tracks and mirroring techniques go a long way towards addressing the repetitiveness occasionally encountered in the first Riptide.

While the above are all great additions, special mention must be made of the game’s excellent visuals and wave physics engine which I think are the key to the Riptide GP2‘s awesome look and feel. The game’s graphics system has been taken up a notch in all departments, with the game looking great and running incredibly smooth on current iOS hardware. I also loved the improvements to the wave physics, which do a great job adding some variables to the core racing, giving players more to think about than simply racing as fast as you can to the finish (although that is still important).

Riptide GP was a great game for its time, but I feel that the improvements and additions made by Vector Unit have turned Riptide GP2 into a full-fledged excellent racing game. The career mode provides plenty of things to do both from a racing and career development standpoint, while online multiplayer acts as a decent supplement for racers wanting more. However, the improvements to visuals, physics, along with the improvements in track quality do a great job amplifying an already enjoyable experience. Racing fans (or fans of fun games in general) really need to check this one out.