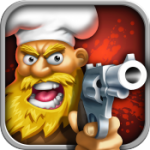 Hey, you! Are you pumped to play another game about mowing down hordes of the undead? No? Well, how about if we change it to undead vegetables? Still no? Well, that’s the pickle Bloody Harry (Free), a new side-scrolling shoot/beat-em-up from FDG Entertainment, finds itself in. We’ve seen countless games of this type already, from the popular Zombieville USA ($0.99) to the Russian-flavored Moscow Dash (Free). Bloody Harry doesn’t really put anything new on the menu, but it sure knows how to arrange the old ingredients in a very satisfying way.

Harry is a feisty chef who’s probably watched a few too many movies. One day, the vegetables in his kitchen go feral, and he sets off to stop them. That’s the story, and I hope you enjoyed it, because you’ll never hear from it again. Not that it matters, as I wasn’t really looking for a deep explanation as to why or how a surly gun-toting chef is committing mass herbicide. The premise alone is beautiful enough. Harry’s a very fun character with a lot of personality, nicely animated and constantly spouting out one-liners. As with any game character with this habit, he does sometimes repeat his one-liners a little more often than I’d prefer. Still, even with that point in mind, his wisecracks lighten things up and are quite welcome. 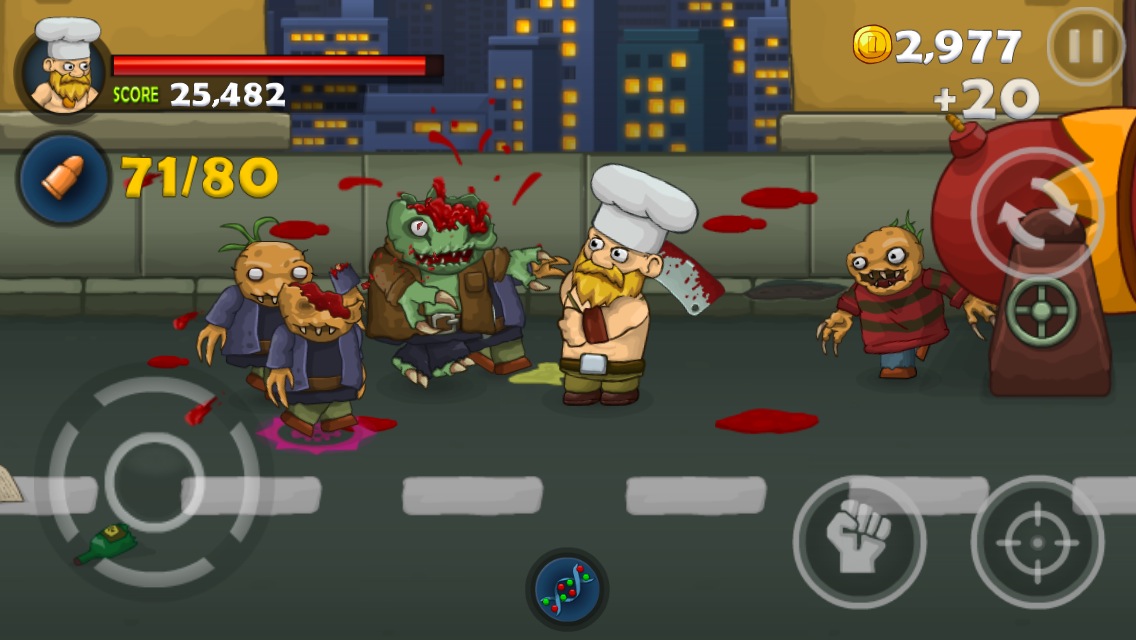 The game is broken down into stages, though there is an unending amount of them. There are two stage types. The first type has you battling through huge numbers of ill-tempered vegetable monsters until you reach one that drops a crown, ending the stage. The second type, which comes after every few stages, is a boss stage, which pits you against one of two bosses and his goons. The stages are all quite short, which makes them well-suited for situations where you only have a couple of minutes to kill. You’ll earn coins by taking down enemies and destroying objects, and crowns by beating stages. Both can be used to purchase a variety of equipment and temporary power-ups. Naturally, you can purchase both currencies via IAP, but interestingly enough, I found I earned more than enough of both types to buy pretty much everything through normal gameplay.

In addition to money, you’ll also earn experience points from defeating enemies. Earn a level up and you can choose between two perks, such as increased health or damage, autofire on a particular weapon category, or just cold, hard, cash. There are so many enemies in each stage, you’ll actually earn a healthy amount of experience just from killing them, but the best way to level up is to complete the game’s missions. The missions play out in the now-standard fashion, with some arbitrary number of things you have to collect or kill. There are quite a few of them, though by the time you reach one of the last ones, clearing a stage without taking a hit, it’s very difficult to pull off. Aside from that, the missions can usually be cleared fairly quickly, so they’re always changing up. It helps keep things fresh while at the same time offering incentive to play another round. 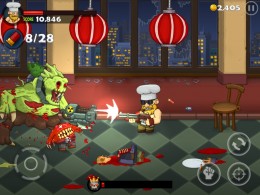 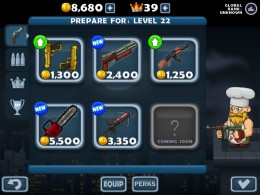 Harry has an insane arsenal at his disposal. He starts off with just a cleaver and a pistol (standard head chef equipment), representing his two basic attacks, melee and ranged. Once you’ve bought all his gear, he’s basically a one-man army that would make Rambo think twice. A railgun, twin golden pistols, and a lightsaber are just some of the highlights of the weaponry. Aside from nearly the entire pistol category of weapons being virtually useless, the weapons are all great. Before each stage, you can choose which guns in each category you want to bring with you, in case you prefer an earlier weapon in any of the groups. Ammo drops frequently during play, so feel free to cut loose with your favorite.

Bloody Harry uses virtual controls, with a fixed stick and three main buttons. Pointing Harry in the right direction got a bit out of hand whenever I picked up the skateboard power-up, but I’m fairly sure that’s intentional. The only problem I had control-wise was that when coming out of the meat mallet power-up, Harry defaults to his useless pistols instead of the weapon you had readied before. It only costs you seconds, but in this game, that’s sometimes all it takes for things to go south. The groups of enemies are sometimes massive, and, owing to a pretty good variety of enemy types, require some quick thinking to maneuver around. The most deadly enemy by far is the little Tomato Head, who will explode if he touches you, rendering you immobile and helpless for a few crucial seconds.

There are quite a few different enemies, each with their own different levels of aggression and methods of attack. They’re quite a personable lot, visually distinct and animated with a lot of little touches, such as showing damage as you whittle them down. They come apart in pretty grotesque fashion, and as they’re not all tomatoes, you probably can’t write it all off as ketchup. The bosses look particularly great. It’s too bad there are only two of them. They’re huge, well-animated, and really command some respect from the player. Visually, the weakest elements in the game are the stage backgrounds. There are only a couple of them, and they’re not very interesting. They’re repeated continuously until you clear the level, like some sort of macabre Hanna-Barbera cartoon.

I’ve said before that for a game in an overcrowded genre to be worth looking at, it either has to bring something innovative to the table, or do the same-old very well. Bloody Harry is a good example of the latter. It doesn’t do anything unique, but it’s really solid all around. The action has a great, chaotic feel to it, the stages are fast-paced, and between the missions, the hefty assortment of weapons, and the level-up perks, you’re always just a step away from getting some cool new reward. I had trouble stopping until I had licked the proverbial plate clean, and looking at our forums, it seems I wasn’t the only one. Stop in at Harry’s, you’ll probably like what you find.