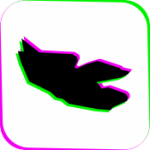 As a hobbyist Unity3D developer myself, I often frequent the forums over there and have been keeping a close eye on Futuridium EP ($0.99). From the screen grabs that the developers uploaded from WIP versions of the game, I knew that this title was going to be something a little bit special.

Visually, Futuridium appears to be the result of the Sega CD game Silpheed and arcade classic Zaxxon getting hot and heavy one night after a few too many mojitos. The flat-shaded polygons, updated to 2013 with realtime shadows and custom graphical “color-shift" effects look absolutely gorgeous, if a little trip-inducing.

Matching the visual style is an impressive soundtrack of eleven original tracks that range from dubstep to… well, I dunno.. I get confused with all these electronica sub-genres, but it sounds downright cool and should you find yourself not getting your groove on with a particular ditty, simply swipe left or right to change the tune.

The premise of Futuridium is simple – your ship is running out of energy faster than a fat man running a marathon. You need to shoot the blue energy cubes that are strategically placed about the levels, thus increasing your energy, before destroying the “core" to move on to the next stage. 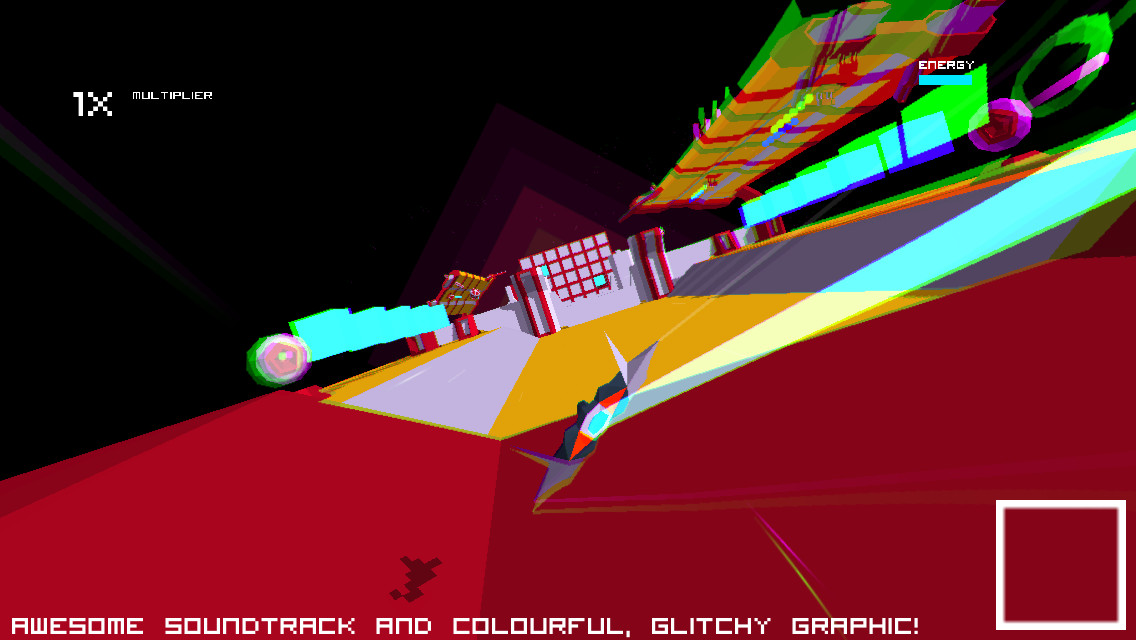 The cubes themselves don’t give much of a boost to your energy bar but when you destroy a bunch of them in sequence, or “chaining" their destruction, you increase the rate at which said bar refills. According to the developers, it is possible to chain together every single cube on each level into one giant combo, but if your piloting skills are as good as mine, you’ll be spending more time overshooting the cubes and crashing into walls.

Each stage is set in deep space and you need to navigate above, below and through large mother ships, in search of the blue cubes. There are thirteen stages of increasing difficulty and a variety of obstacles to negotiate from bridges, walls and pylons to enemy projectiles. 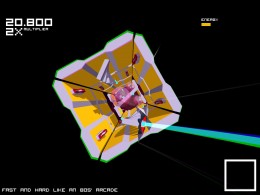 The game’s controls work very well. You adjust your ship’s altitude and direction by using the left hand side of the screen as a virtual joystick. Up, down, left, right, you get the idea. The Y axis can also be reversed via the options menu, for a more traditional flight experience. There is no control over the velocity of your ship, which is determined by the difficulty level you decide to play (trust me, easy ain’t what it says on the tin).

To shoot, you simply tap inside the box in the bottom-right corner of the screen, tap anywhere outside that box and your ship flips around almost instantly on the Z axis, an incredibly useful maneuver, especially when starting out, as you will overshoot a LOT of energy cubes.

Despite the fluid controls, due to the game’s flat-shaded visuals, at times it can be hard to determine your ship’s altitude and even distance from the cubes that you’re trying to make go boom. This can result in a bunch of shooting that appears to be right on the mark, only to end up in having to fly past and re-attempt the destruction, losing out on precious chains and multipliers, thus your energy depleting at a faster rate.

Futuridium EP is a hard game, nay, calling this game hard is like saying that Peewee Herman is “a bit soft". In true old-school arcade form, you have to play through each level in sequence. Once your energy runs out, that’s it, game over and you can not restart from the point you left off. It’s back to the beginning for you!

There are continues available that allow you to begin where you ran out of gas, but these need to be earned. The game keeps a tally of the total cubes destroyed and awards the precious continues when you hit certain benchmarks. The first few continues are easily achievable at 100, 250 and 500 cubes, then it jumps up to 1500 and the benchmark goals increase exponentially, to somewhat ridiculous numbers. 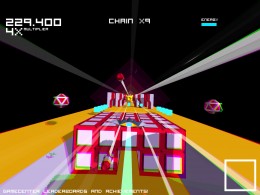 Continues are extremely important, as each time you crash, you lose any chains and score multipliers you may have built up, meaning that your energy replenishment at the end of each stage will be at a lesser rate and sadly, the energy is carried over between levels.

You can play each level that you have reached in the main game on its own but this is nothing more than a practice session and does not unlock additional stages. The only way to progress is by starting right from the very get-go and trying not to die. It does get a bit repetitive, having to replay previously beaten levels, especially when the game’s difficulty curve is so brutal – one mistake such as a crash or a handshake with an enemy missile results in time, and as a result, precious energy being lost.

Unfortunately I don’t think being forced to start from the beginning really works well in a modern game. This system is a throwback to the coin ops of the ’80s, where it worked a treat, but remember, the main aim of arcade machines is to collect cash. Having some sort of progress save system would be extremely beneficial in what is, at it’s core, one hell of a tough game.

Futuridium is a stunning and innovative mix of traditional SHMUP and puzzler, and as a concept is pure gold. Sadly, the immense difficulty, stinginess with credits and lack of any progress-saving system hold the game back from being a truly memorable classic.

If you want to check the game out before plonking down a couple of bucks, Futuridium is available as a free download for both PC and Mac from the official website.

Futuridium EP is a very good game that so tantalizingly sways on the verge of being excellent. Should a future update make this title more accessible to the average gamer, it will be one of the true “instabuys" of 2013. Of course, if you consider yourself a “hardcore gamer", then Futuridium EP has already reached that status.