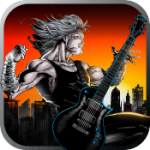 Eternal Descent: Heavy Metal Heroes (Free) was an instabuy for yours truly. Heavy Metal, using guitars as weapons, and Joe Satriani? What could be more suited to a middle-aged metal-head gamer like myself?

As it turns out, I’m not as much of a metal-head as I thought, as the only character in the game that I have actually heard of is Satriani. To be fair, though, I am old and my musical taste hasn’t moved beyond Iron Maiden, Testament, Metallica and Megadeth in the last two decades, so for those of you who have kept up with the scene, you may well recognize some of the names, such as Wayne Static, Andrew W.K and Misha Mansoor. 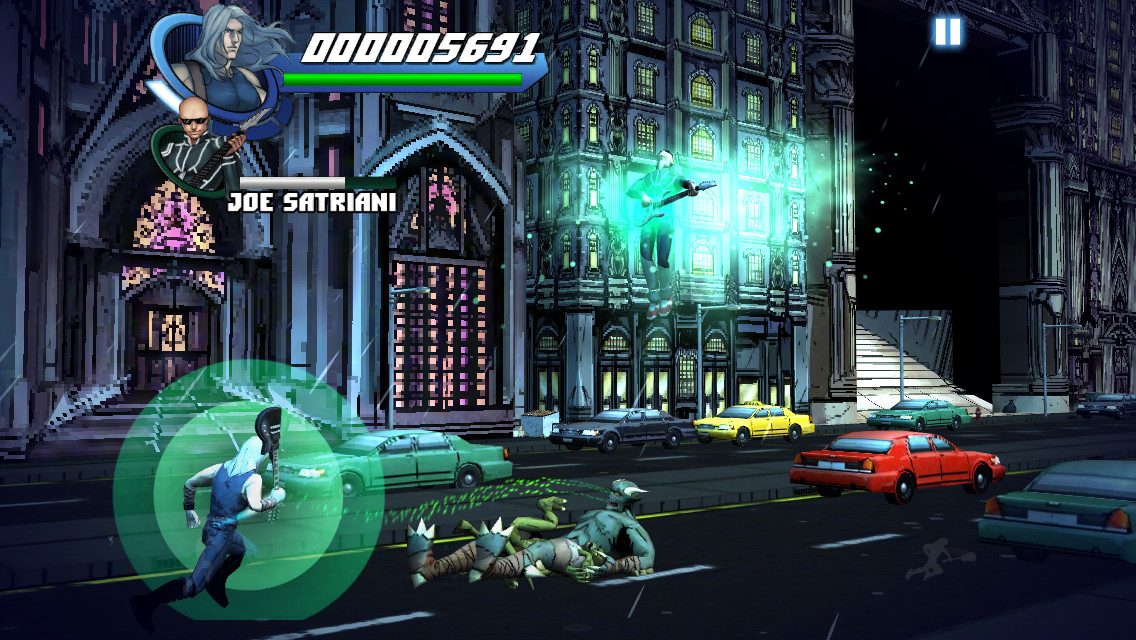 The game itself takes place in a comic book, Gotham-like setting and the aim is simple – save the world from the evil hordes of demons, with only your six-string as a weapon. Luckily, that axe is one hell of a weapon, capable of knocking demons out of the park with a single swing.

The main character is a white-haired head-banger who, in true runner style, sprints from left to right, inflicting pain on any of the forsaken who are silly enough to get in the way. To administer the beatings, you only have two options, swinging the guitar like a baseball bat or upwards, like a giant mahogany-bodied uppercut.

To swing your bat, you simply tap the right hand side of the screen and to uppercut, tap the left. You can also charge the attacks by holding down the “button", which gives a bit more oomph to your axe-swinging, making light work of the enemy critters.

The enemies enter from the right hand side of the screen and are either ground-based, or winged creatures who drop down to claw your face off from above. At first, it seems logical to uppercut the airborne satan-spawn and swing like a key party at the ground attackers. However, it soon becomes apparent that the baseball style approach is equally effective on both varieties of vermin, taking away any kind of strategy to the game play. Add in the previously mentioned ability to charge each attack and you have a pretty damned effective way of racking up massive scores, without needing the uppercut.

There are several types of enemy creatures, from small goblin-like beings through to larger, tougher demons, though to be honest, when utilizing the charge properly, none of them put up much of a fight. You also gain extra “combo" points by smashing the creatures into each other. Guitar-batting a demon into a bunch of his mates and watching them all tumble down the street like mangled rag-doll skittles is extremely satisfying.

The enemies start out as your basic garden variety green demons and after each boss battle you are introduced to more exotic specimens such as blue, red and yellow. Each color is a bit tougher than the last, so don’t make the mistake of swinging and forgetting… some of them get straight back up to claw your virtual eyes out. Remember to make the most of that charge system! 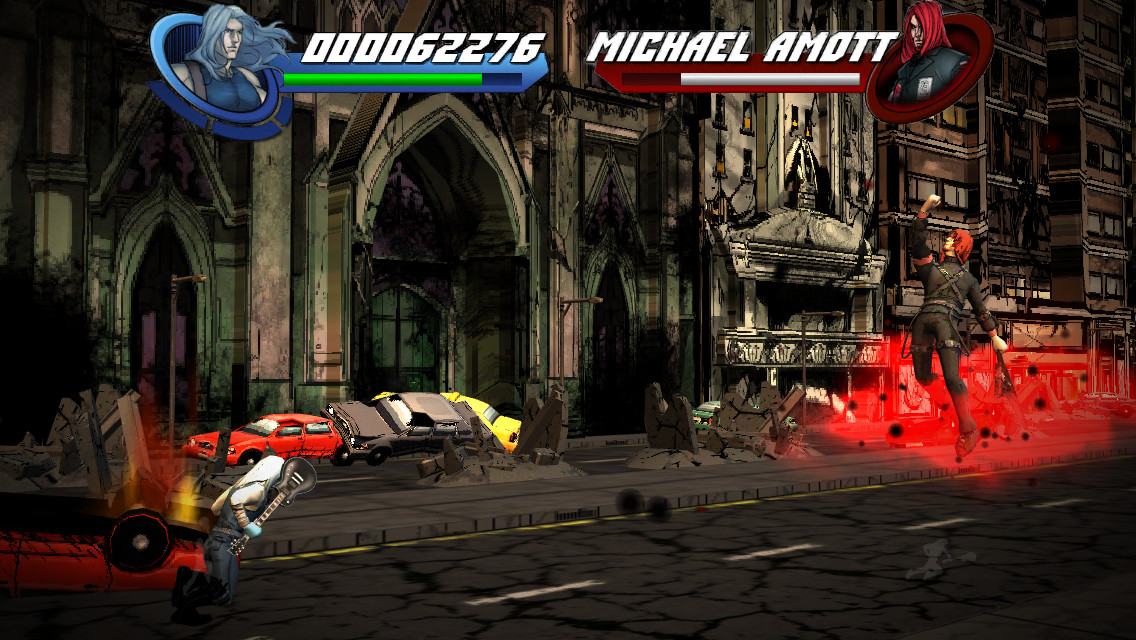 There are three boss fights in the game, starting off with Wayne Static, who enters the fray when you have notched up 10k points, I won’t explain how to beat him, as none of us like spoilers, but suffice to say, with the limited control scheme (which is a good thing in an iOS game), it’s not exactly rocket science. The next boss, Michael Amott, doesn’t approach until a fair way later and unfortunately, disposing of him is a similar affair. The final boss is some dude named Pit Lord Loki and his “Army of Darkness" and by this stage, you be well and truly in the fiery lakes of hell – it’s really amazing how your shoes manage to not melt.

To help hand out the whup-ass, the player has a few friends who are activated by smashing enemies into their respective icons. This is where a bit of strategy is needed in the game. You see, when you charge the uppercut move, you stop running, allowing you to wait and line up a bad guy before bashing him straight into the power-up icon. This is a neat system and requires a bit of skill, on the down side, it can be a real pain when you hit a goblin for a home run and he just misses that Joe Satriani power-up, stealing away your ability to replenish that life bar.

Once activated, Joe Satriani acts as a kind of fairy god mother, increasing your health bar and making you impervious to attacks. Misha Mansoor simply fires off a massive lazer beam from his guitar every few seconds, taking care of the winged beasts, and Andrew W.K spins around like some ballet dancer on meth, shouting about pizza and taking out any demon who happens to walk face-first into his rapidly rotating six-string.

Eternal Descent: Heavy Metal Heroes is a decent attempt at a stale genre and features a bunch of cool ideas, from the background city that degrades over time, eventually turning into the bowels of hell itself, to the weapon charging and power-up systems, and of course, the fact that the game is based around the most awesome genre of music ever. However, it falls far short of being a classic. There’s not much point in the uppercut move, other than collecting power-ups and boss battles and the ability to run practically all the way through to the final boss simply by using the basic charge attack makes for an extremely repetitive experience that grows tired very quickly. Adding to the lack of replayability is the fact that currently, GameCenter doesn’t work, so you can’t even show off how good or awful you are at cracking demon skulls to your family and friends.

Heavy Metal heroes is a fun game, it’s even a good game, there’s just not enough meat to it’s metal bones. Pretty, comic book graphics and epic guitar-rock soundtrack do not a complete game make. Still, if you get bored with dispatching of demon-life, you can always enter the store from the title screen and purchase the Eternal Descent comics, which will be downloaded to your iBooks shelf. Yup, the game is based on a comic series, a series that, again, I hadn’t heard of… but to be honest, I think this game might have done just enough to pique my interest… wait a minute, that was their plan! To sell comics! How sneaky! Oh well, at least there’s no other IAP to speak of.