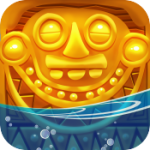 As much as I love fast action games, sometimes it’s nice to play something a bit more relaxing. Unfortunately, it can be a little tough to find a game that is relaxing without also being dull, so I’m always pretty happy when I stumble across something that fits the bill. Dive for Treasures ($1.99), thanks to its smooth, clever controls and peaceful undersea atmosphere, proves to be just the thing to decompress after a busy day.

A ship carrying a variety of treasures was sunk by a storm, and using your submarine, you need to recover them. There are pirates in the area with a similar goal, though, so it’s not just a simple salvage job. In total, there are seven stages at present, which is kind of a small number, but the stages are actually quite long and complicated for the most part, so the game on the whole ends up being fairly lengthy. I do hope the developer adds more stages later on, as I was still thirsty for a bit more after finishing everything up. 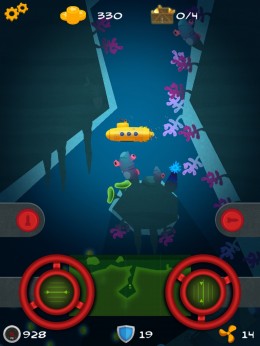 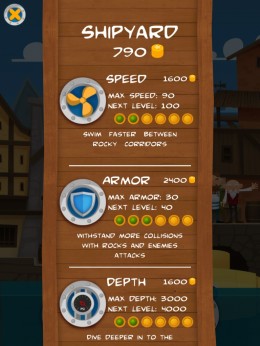 In each stage, you’ll be tasked with three goals. Every stage asks you to locate a unique treasure item, such as a Greek vase, or a Japanese katana, and so on. In addition to this unique treasure, there are also four hidden treasure chests in each stage, and finding them is often another one of the stage goals. Other goals include collecting a certain number of coins, destroying enemy submarines, or reaching certain depths of the map. There’s no time limit to complete these goals, so you can take your time finding everything. Once you’re ready to finish the stage, you’ll need to get safely to the port to proceed.

Between stages, you can use the coins you’ve collected to power up your submarine’s parameters or even unlock new looks for your submarine. Fully decking out your sub costs quite a lot of coins, as does purchasing the submarine skins, but upgrading is cheap enough early on for you to get your sub in more than satisfactory shape to take you through the game. If you really want everything, you’ll have to replay the stages, which isn’t really a terrible proposition, or buy some IAP. A tip for the beginner: upgrade your depth ability first, as it’s required for achieving many of the game’s goals. The first weapon upgrade is very handy too, allowing you to fire at an angle, which helps for handling the pesky pirates and their mines. 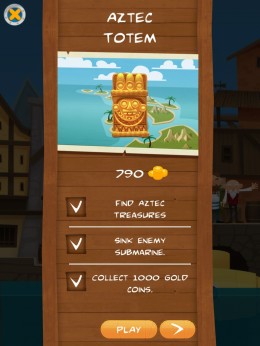 As mentioned, there is no time limit, so there are really only two things that can put a stop to your journeys under the sea. Your sub has a certain amount of hit points, and you’ll lose them by bumping into walls with too much force, getting hit by the enemy subs and their projectiles, or by hitting a mine. The mine is by far the most dangerous threat, causing devastating damage that will often take out your vessel in one pop. You aren’t defenseless, however. You can fire ahead or directly above you to take out mines or enemy ships. You’ll need to maneuver very carefully to get into position to do that, though, and learning how is going to take a little practice.

Dive for Treasures has a very unique system for handling the submarine. If you’ve ever played Steel Diver for the Nintendo 3DS, it’s going to look somewhat familiar. There are two hand-wheels positioned on the left and right sides of the screen. The left one controls your depth. Spin it clockwise to dive, or counter-clockwise to surface. Spinning the right wheel in either direction moves you in that direction. Double-tapping either wheel puts it back in the neutral position, which is very useful. Your sub is subject to momentum, so you’ll need to be careful if you’re traveling at full speed in any direction, as it takes a few seconds to come to a stop. It’s a bit weird to get used to at first, but after a bit of practice, you’ll be navigating like a pro. I really loved the control this setup gives you over the smallest movements of your ship. Some of the tighter sections of the game could have been very frustrating with lesser controls.

Like I said above, there are two ways your run can end. The first is physical damage, and that one is of course quite fair. The second way can sting a little bit worse. If you exit the stage, or if you put the game to sleep and another app pushes it out of memory, you’ll get booted back to the title screen. Any coins you found will still be in hand, but any treasures you collected will be reset. As the stages are quite large and long, some of them pushing well past a half hour, having no way to save your in-stage progress to pick up later can be a bit of a bummer. You’ll have to set aside some time if you aim to clear a level in Dive for Treasures, so it’s not really a great game when you’ve only got a few minutes to kill. The developer is apparently looking into some kind of workaround for this, so it hasn’t gone unnoticed. 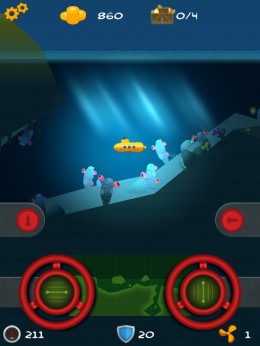 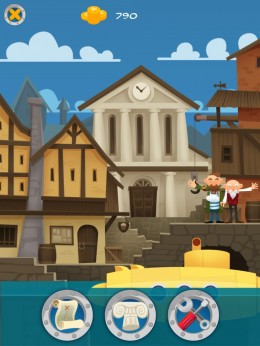 The visuals of the game are really nice. It’s generally easy to see what’s going on in your immediate vicinity, and the lighting really sets the underwater mood. It’s a little hard to spot the hidden treasures at times, but I suppose they wouldn’t be very hidden otherwise, would they? The music is very sparse, usually only gently fading in when you’re near a treasure. Most of the time, the only things you’ll hear are the sounds of the ocean depths and the lonely ping of your sonar. Like the graphics, the sounds really establish the atmosphere very well.

It all comes together to create a game that has a really mellow atmosphere, but challenging and active enough gameplay to keep you involved. Poking around the large maps trying to find all of the treasures, expertly steering your vessel around hazards natural or otherwise, and getting absorbed in the isolated underwater mood come together to create a very nice little experience. Apart from a lack of mid-stage saves and the relatively small number of levels, I can’t think of much to complain about at all. Dive for Treasures really pulled me in for its duration, and even after finishing, I find myself going back to it just to enjoy the experience of playing it.