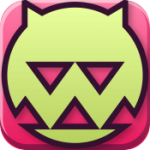 At first glance, one might take a look at Jeffrey Fal’s Dungeonism (Free) and dismiss it as yet another retro-inspired dungeon crawler. However, anyone doing so would be making a big mistake, as they’d be missing out on an impressive addition to the App Store. With a deceptive amount of depth, plenty of content and a great art style, Dungeonism is an excellent addition to the old-school dungeon crawling scene and must be checked out.

Dubbed as a ‘rogue-ish’ dungeon crawler, Dungeonism challenges players with completing a set number of zones, each offering minor storytelling in the form of narration (or occasionally, cutscenes) found between maps. While the number of levels don’t change, each individual map is mostly randomized with each playthrough, meaning a second romp through an already cleared level will be mostly different. There are even maps with multiple levels, emulating the traditional ‘endless’ nature of standard rogue-likes. These end up being good maps to grind on, with more risk/reward as dying in a map wipes away anything earned in that level. 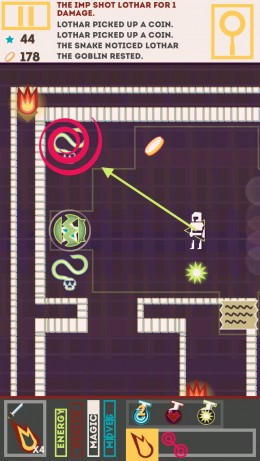 Dungeonism is also rogue-ish in its gameplay, which offers a simplified top-down turn-based style that is typically found in most rogue-likes. There are some small changes to the general formula, such as the use of movement points (turns aren’t strictly 1-to-1 against enemies), the importance of directional combat (flanking an enemy causes more damage) and the inclusion of simple puzzle rooms to advance in some levels, but for the most part the game’s battle system and controls will feel quite familiar. An energy system means that heroes can’t simply charge into battle, as running out of energy reduces both your attack power and defense. While Dungeonism doesn’t stray far from its roots as far as core gameplay, its improvements on the formula are what really help it stand out.

One such area is in its character leveling system. Rather than heroes simply killing enemies and leveling up, experience points are littered across each level and must be collected (similar to coins). Those points are then used to upgrade one of ten different categories, such as melee damage, defense, capacity (how many items you can hold), memory (how many spells you can have at the ready) and more. Adding some complication to the system is the fact that Dungeonism also awards practice points and discounts to stat increases which are based on what is done during that level (shoot a lot of arrows and you get a discount on an archery upgrade). It’s an excellent system that offers a lot more customization and player choice than I’ve seen in similar games.

Other features in Dungeonism aren’t ground-breaking by any stretch but go a long way towards improving the overall game. A full equipment system lets players buy (and find) a variety of different pieces of armor that imbue stat increases to the hero. Similarly, the game also features a robust magic system that offers a lot of spells that can either be bought or found in-game. I liked the fact that there are plenty of useful spells available, which makes the finite amount of spell spaces even more important when figuring out what you should keep (unless you spend a lot of experience on memory, of course).

Players are going to need the above systems too, as Dungeonism offers a ton of content. There are a decent amount of zones to discover, each with their own maps. Players can also discover maps in-game, which can be used to unlock new maps or even new zones. While beginning zones are filled with pretty easy enemies (probably my biggest complaint). Later zones up the ante with baddies that offer more than just increased stats, occasional boss battles which require a bit more strategy, and different environments that affect movement, energy, and more. There’s plenty of opportunity to grind, improve your characters, and develop your own playstyle to pass those harder zones.

A lot of the appeal of a rogue-like is the ability to simply engage in an endless run until you win or die. I’d argue that Dungeonism’s move to take that gameplay and divide it up into zones and maps, combined with its excellent character system, adds a certain amount of purpose that I find missing from more traditional rogue-ish dungeon crawlers. Sure, Dungeonism has a few small issues like the above-mentioned difficulty curve and a tutorial system that could be organized better, but overall it’s an excellent title and well worth checking out.