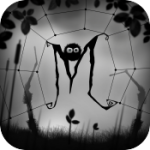 Miseria: Worlds Apart ($0.99) has seemingly come out of nowhere to create a winning game formula by melding action-arcade design sensibilities with eerie graphics, haunting music, tricky puzzles and unique controls. It’s a formula that doesn’t seem like it would work, and at times it is as frustrating as hell as you try to solve puzzles that require a combination of action-arcade game reflexes and quick decision-making, but in the end it all comes together. The biggest downside is that the controls take some getting used to, but once you figure them out they’re excellent. Oh, and there are some minor level balance issues, but that won’t deter you from having a great time with Miseria: Worlds Apart. 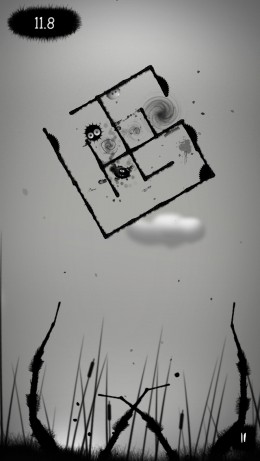 First, a little bit about the game and how it works. At its core, Miseria: Worlds Apart is a puzzle/maze game. You play as Lurk, a little black ball of spikey fur. Lurk’s girlfriend has been kidnapped by Grunzel, the many-eyed monster-spider. The game is played on a series of vertical mazes that sit directly over Grunzel. Each level requires you to rotate the screen to guide Lurk as gravity propels him across and through the mazes to the exit while avoiding obstacles like spinning buzz-saws, hungry bats, confusing teleporters and spring-loaded plungers. You also have to be careful not to fall out of the mazes and into the hungry maw of Grunzel.

The controls are odd and definitely take a little practice to understand, appreciate and master. You rotate the maze left or right by tapping on the corresponding side of your touch screen. Tap on the right side and the maze will rotate exactly an eighth of a turn to the right. Same for the left side. If you want to rotate the maze a quarter turn, tap the screen twice.

The difficult-to-master part is tapping right and left in rapid succession to correct your rotation when something more or less than a factor of one-eighth of a turn is required. For example, you might want to rotate the maze a sixteenth of a turn to get Lurk rolling slowly toward an edge that he needs to cross carefully. You achieve this by tapping right or left quickly as needed. It takes some trial and error and, in practice, is akin to the kind of rapid twitch controls needed to get through an action-arcade game. At other times you might need to rotate the maze many times to the right in rapid succession and then suddenly rotate left to correct for Lurk’s velocity. Gravity, velocity and inertia are in play at all times and you have to account for the effects of each physical force when working through mazes.

If you’re like me, you’ll find yourself leaning left or right in your seat at times rather than tapping on the screen. I wonder whether this game style could work with controls that require you to rotate your device. Also, keep in mind that you have to tap the screen to rotate the maze. Holding down on the screen won’t give you a continuous rotation, although there were times when I desperately wished for this feature. 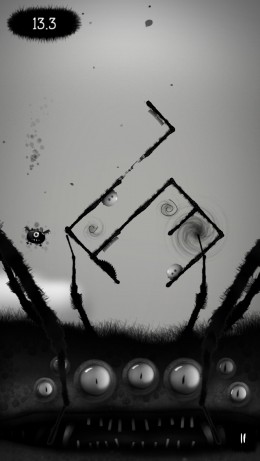 Miseria: Worlds Apart has 80 levels spread over four worlds. Each level has a different kind of maze. Mazes are like complicated networks of scaffolding made of spider legs. Early mazes have few obstacles. As the mazes get more complicated in structure, so do the obstacles you have to navigate. Later levels add buzz-saws that tear you apart, teleporters that transport you into danger, bats that eat you alive and plungers that shoot you into jeopardy.

Also, you have to be careful at all times not to fall out of the maze and into the mandibles of Grunzel. At certain moments in each level, Grunzel will scream. In later levels, the screams will shake the maze, adding another element of danger to Lurk’s fragile existence. The only downside to the level design is some minor balance issues. The levels get progressively harder, as you would expect, but some later mazes are shockingly easy. I wasn’t sure what to make of an 18th level that required 25 attempts to complete only to be presented with the following level which took one try.

The game design is well thought out but hard to appreciate until you master the controls. With enough practice anyone can master the controls in Miseria: Worlds Apart. It just takes time. At one point, I gave up on the game, only to come back to it determined to try it again because it’s such an appealing package. Once I figured the controls out, I could see the excellent game design. Trial and error is critical. As you move through levels, you’ll slowly see how you have to adjust your approach. Sometimes you’ll realize that you need to rotate the screen left instead of right to complete a level. Grunzel’s maze-shaking screams come at predictable times so you can plan around his vocal attacks. At other times you’ll need to think ahead quickly. Some levels have multiple mazes. Sending Lurk through a teleporter might send him to another maze that requires super-fast rotation as he teleports to avoid a nasty death.

You have 15 seconds to reach the exit although there are little slimes scattered around each level that grant you a few extra seconds of play time. Sometimes you can avoid the slimes altogether, but some levels can’t be completed without grabbing those precious extra seconds.

The graphics in the game are gorgeous. Everything is painted in blacks, white and shades of grey with an occasional splash of muted color. Although the graphics are minimalist in design, they do a great job of conveying a creepy atmosphere.

Then there’s the music, which is an eerie collection of orchestral tunes highlighted by haunting melodies, operatic vocalizations and sweeping arrangements. Miseria: Worlds Apart really shows how to use music to enhance a gaming experience. The music creates a moody atmosphere that swells at certain moments to add depth and emotion to the package.

Miseria: Worlds Apart plays equally well on an iPad (I played on an iPad 3) and an iPod touch (I played on an iPod Touch 5). I assume the game will do just fine on an iPhone. As you would expect, the iPad HD version looks beautiful on the larger device’s Retina Display. The game doesn’t have Game Center Achievements, although the developer has hinted at adding this feature in a future update.

Ironically, by the time I completed Miseria: Worlds Apart I loved the controls. Mastering this game was definitely a positive, evolving, learning experience for me. And that’s what made the game so enjoyable. After a wicked learning curve, it got easier the more I played. Make no mistake. This game is challenging and some levels will have you wanting to rip your hair out, cuss at your children and throw your device across the room as you try 10, 20 or more times to find or achieve the right solution. Despite the frustration, I was always able to see the solution and eventually get to the end of each level and ultimately complete the game. Give Miseria: Worlds Apart a chance. It deserves your attention.