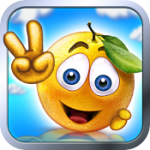 A while back, FDG Entertainment treated iOS gamers to a port of the popular Russian Flash game, the descriptively-named Cover Orange ($0.99). A physics-based puzzle game that works a bit like a reverse Angry Birds (Free), it has you placing various objects to protect oranges from deadly passing rainclouds. It proved to be a fairly big hit, and as these things work, here we are today with Cover Orange 2 ($0.99) (or Cover Oranger in the widely-accredited Die Hard counting system), once again from FDG Entertainment.

Now, to be very direct, there’s not a great deal of room in the concept for any crazy additions to appear in a sequel, but Cover Orange 2 does try its best to freshen things up without hurting the core gameplay. In the end, however, you’re still going to be dropping a variety of pre-determined objects to push, catch, and cover one or more oranges to protect them from the killer rain. It’s a mission pack sequel to be sure, but it’s at least a pretty good mission pack sequel.

It’s a given that you’ll be getting a batch of new levels, but unlike some sequels that start off a little thin on the level count, this game gives you 120 levels right off the bat. Given the first game ended up with 400 levels, you can probably expect this number to swell considerably, but even just taken for what it is you get quite a bit of bang for your buck. 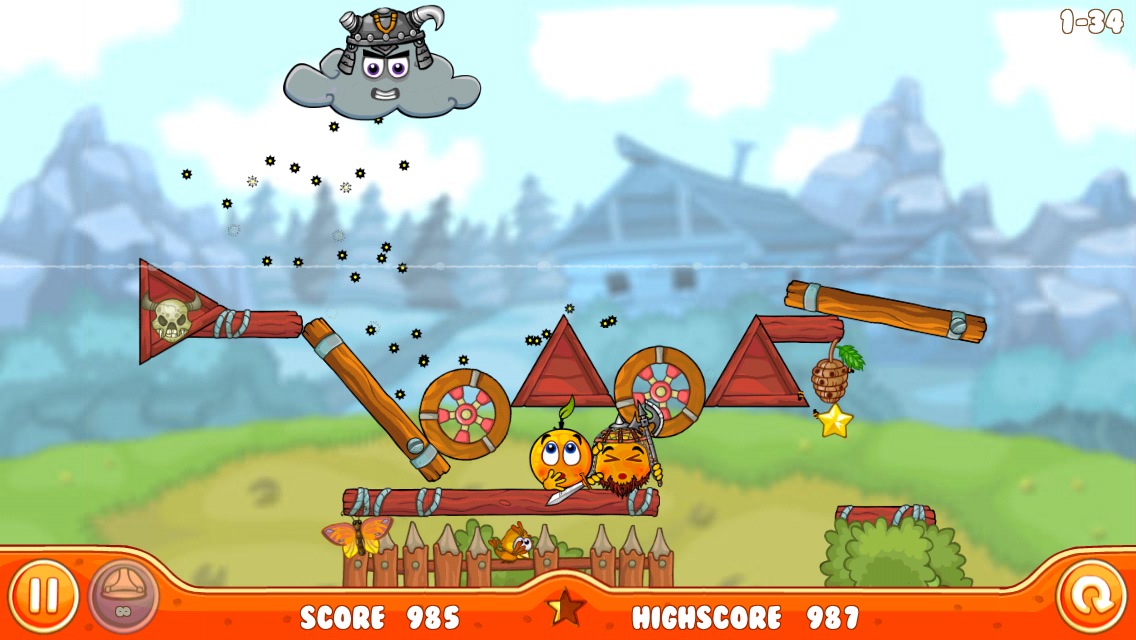 The levels run the gamut from laughably easy to insanely difficult, with a really nice difficulty curve. The game is pretty flexible about letting you move past a stage you can’t figure out, but it won’t let you leave too many unfinished stages behind. If you get completely stuck, you can use a scarce (unless you buy some IAP) helmet item to finish a level, but the stage will be marked with your shame until you do it correctly.

In terms of gameplay, the main additions come in the form of some new objects, such as trampolines, glass, and spiked balls (which are pretty much just used for breaking said glass). You’ll also often be dropping the oranges themselves into the stage. These aren’t game-changers, but they add up to plenty of new tricks for the level designers to use to stump you. The other new gameplay addition is the now-requisite three star scoring system. You’ll earn one star for completing the level, another star for doing so quickly, and a third star for touching a star held up by a background character during a brief window while the rain cloud passes. 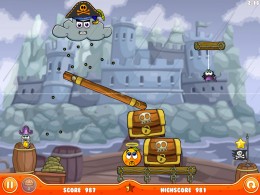 That last star really just feels like busy work to keep your eyes on the screen while the cloud does its thing, and is all too easy to forget about if you get swept up in the tension of hoping your oranges don’t get splattered. Oddly, except for the star you get for a speedy completion, this system is completely unconnected to the pre-existing scoring system, which is still in place. It feels a bit redundant to have both, but I suppose you can’t have a level-based game anymore without grading performance on a three-point scale.

Surprisingly little has changed in the game’s presentation. The oranges have a few new animations and there are more animated elements in the background, but apart from the costumes, you’d probably be hard-pressed to differentiate between the original and the sequel. Sound effects, too, are almost all exactly the same, though the oranges seem to have one or two new things to say. That’s not to say the game looks or sounds bad, as everything is very charming and cute, but it’s a little disappointing that after so much time has passed the game is still using plenty of assets from the years-old Flash game.

That said, the level design is what is truly important here, and in that respect, Cover Orange 2 shines. The developers somewhat miraculously haven’t run out of new ideas for stages yet. Every stage has a particular solution in mind that you need to figure out, and it’s not always immediately clear what you need to do. Unlike some other physics-based games, you can’t really brute force your way through this game with repetition and luck.

There are many stages where you can find an alternate solution from what the designers likely had in mind, but it’s actually a bit surprising how well they covered their bases in that regard. Sometimes you’ll think you’ve put one over on the game, but when the cloud passes by, a raindrop will bounce off of some disregarded object or angle and put a quick end to your sly grin. When you do hit on the answer, however, you’ll feel pretty satisfied with yourself, and that’s one of the hallmarks of a puzzle game doing its job well.

Cover Orange 2 is more than a little unambitious, but the original game is certainly solid enough to weather a sequel that plays it safe. Even with the minor additions, there’s still a lot of brain-teasing entertainment packed into this game, and if the first game is any indication, there’s quite a lot more to come. People in our forums have been having a blast with it, particularly with the meta-game of trying to get a perfect score of 999 points on each level.

If you’re burnt out on Cover Orange from the meaty (pulpy?) original, there’s probably not enough new here to get you excited again. Otherwise, this is another satisfying serving of a very delicious fruit. I just hope the inevitable Cover Orange With a Vengeance tries a bit harder.