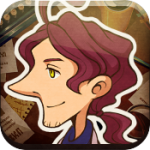 Although the best days of the series are behind it, the Professor Layton games on the DS/3DS were undeniably huge hits worldwide, proving popular with many types of people who aren’t usually big gamers. A combination of excellent production values, intriguing (if outlandish at times) stories, intuitive touch-based controls, and approachable mind-teasers straight from the pages of puzzle books, the Professor Layton series is easily the crown jewel of developer Level-5. The touch-based gameplay and broad appeal make the series a natural fit for iOS, but fans have somehow been kept waiting.

Sadly, they’ll have to wait a little longer, because while Layton Brothers: Mystery Room (Free) carries the Layton name and forces a few references in, that’s all it has in common with the well-known franchise. The good professor and his supporting cast are nowhere to be found, and neither are the classic puzzles that comprise the gameplay of that series. Once planned as a release in Level-5’s Japan-only Atamania series on the DS, Mystery Room was moved to iOS and granted the Layton title, which explains its extremely superficial connection. So, no, this is not Professor Layton for iOS, but it does have its sights set on a certain other popular Japanese adventure/logic puzzle series: Ace Attorney. 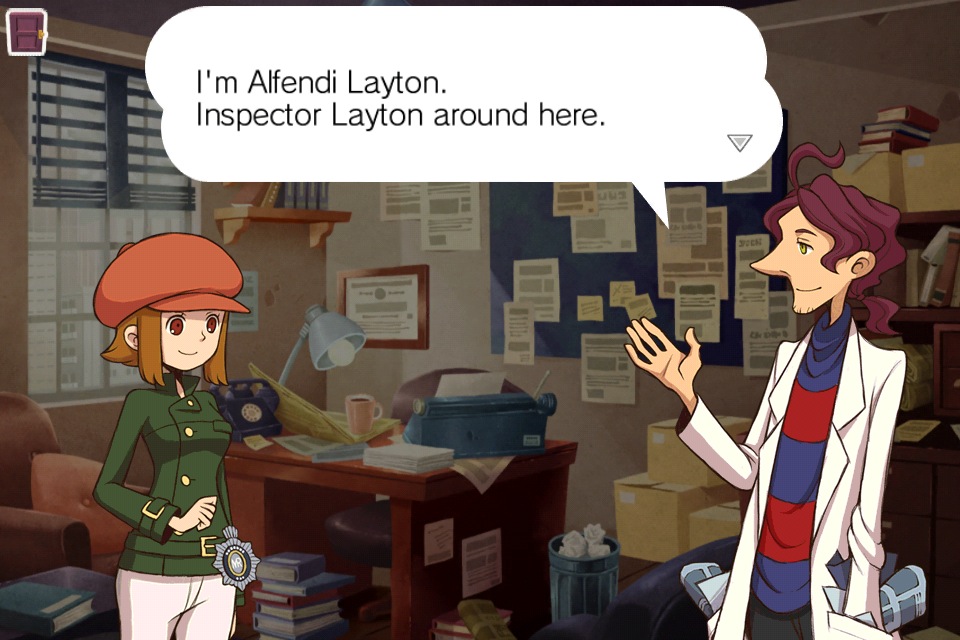 The story follows two characters, though we’re generally seeing things from the point of view of just one. Lucy Blake is a fresh new recruit at Scotland Yard, whose poor test scores land her the privilege of working with Inspector Alfendi Layton. Inspector (or as Lucy calls him, “Prof") Layton is a bit of an eccentric who works only on the toughest – usually homicide – cases. Your team of oddball genius and plucky young sidekick has to investigate scenes to gather evidence, which you’ll then use to prove which suspect did the deed. It’s less than subtle in its imitation of Ace Attorney Investigations in particular, and it wastes no time firing a shot against that franchise’s bow in the very first case. It’s feisty, to be sure, but it’s picking a fight that it’s ill-equipped to win, except perhaps in terms of production values.

For most of the game’s nine cases, the game progression is very similar. You’ll get a brief description of the case, and Layton will give you five minutes to examine the crime scene for evidence. The crime scenes are presented from a bird’s-eye view, though you can zoom into highlighted areas for a closer look. With the exception of the final case, you can only examine things that the game highlights and names for you. This limits the amount of pixel hunting you’ll have to do at the expense of simplifying your investigation, but you do need to make sure you use the manual zoom to pick up on smaller or hidden details. 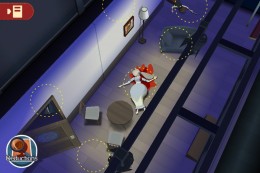 Once you’re finished looking around, Layton will ask you to give your best guess at the guilty party. After that, either Layton will pose some questions or you’ll speak to one of the suspects to find inconsistencies, sending you back to the crime scene to gather more evidence, this time at a leisurely pace, to address each one. Finally, with all the questions answered and evidence in hand, you’ll confront the guilty party, present the correct evidence, and then it’s back home in time for tea.

The game is gorgeous, with very stylish high-resolution artwork. Every character has a ton of personality built right into their appearance, and while the animations aren’t quite on the level of those in Ace Attorney, everyone has a good range of expressions and poses. The crime scenes are done up with polygons, and while they aren’t stunning, they serve the purpose very well. The soundtrack, composed by the legendary Yuzo Koshiro, is a wonderfully jazzy score that will stay with you well after you’ve stopped playing. My only complaint is that I wish there were more of it.

Also of note is the exceptional localization, done by Richard Honeywood, the man behind such superb translations as Dragon Quest VIII, Chrono Cross, and the recent Ni no Kuni: Wrath of the White Witch. As usual for his work, Mystery Room uses dialects and accents wonderfully to flesh out the characters. Whether it’s Lucy’s charming Yorkshire dialect, or the hilarious mobster-worshipping delivery boy with a heavy Lancastrian accent, you’ll almost be able to hear their voices in your head as you read. There is also a veritable avalanche of puns tossed in during the fast-paced interrogation sequences, flying by so quickly you won’t even have a chance to groan at half of them. I wish every game could have a translation as nice as this one. 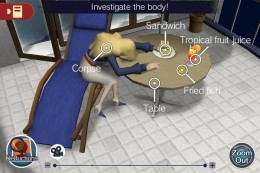 Level-5 have never had a problem with production values, and it could perhaps be argued that it’s one of the things they’re most famous for. They typically stumble in other areas, and Mystery Room is not exempt from that. My biggest complaint with the game is that the stakes are incredibly low. There is no way to lose. If you make a mistake at any point, the game will just inform you that you are incorrect, and allows you to guess again. Don’t get me wrong, I’m not pining for the days where walking King Graham over a pixel would get you a game over, but the game really has no bite to it at all. Ace Attorney used the Judge’s patience as an excellent way to put some pressure on the player to get the right answer. Mystery Room would benefit greatly from some kind of analogue to that.

The game is really slow to develop its teeth, really only ramping up the complexity of the puzzles in the back half, so for the first few cases, you’re really not doing much other than following a pretty tight script. It’s not the best way for the game to present itself, given that it’s ostensibly relying on hooking you with the free cases to entice you into purchasing the remainder of the story. Even at its apex, Mystery Room falls well short of the complexity, insanity, and spectacle of even a mid-level Ace Attorney case. Here, the suspect who looks bad usually is bad, and the outcome rarely differs from what you would expect from a first glance at the scene. It feels odd to complain about an adventure game being too logical and grounded with its solutions, but everything just comes together a bit too easily.

The length of the game is pretty good, at least. Each of the cases you pay for will probably take about an hour to solve, and the total price to buy every episode (at the time of writing, five dollars) is quite fair. You’ll want to get every episode, because there is an overarching plotline running through all the cases, referring frequently to an incident that happened in the past that has yet to be resolved. Overall, the story is decent if not surprising, and the characters manage to bring things up a level with their various quirks and quarrels, which should keep you interested through the conclusion.

If you were looking for a Professor Layton game, I regret to say you won’t find anything like it here. If, however, you liked Ace Attorney and want something along similar lines, this is probably of interest to you. Be forewarned, it’s not nearly as challenging, robust, or manically enjoyable as that series, but it serves the appetite well enough. Layton Brothers: Mystery Room is a decent effort that adventure buffs will probably enjoy, but it’s sitting in a very uncomfortable pair of shadows belonging to the game it’s not and the game it’s trying to be.