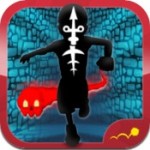 Even at first glance, Kyubo ($0.99), developed by Chestnut Studio, is a game with a lot going for it. The developer worked on some of the Angry Birds games, the art style is distinct, there are no IAPs, and there’s even a little bit of mystery in the story set-up. Unfortunately, before too long, a fly appears in the ointment, and it’s a bit hard to get over. Nevertheless, I do feel the game is something of a diamond in the rough, so I’d like to bring some attention to it.

Kyubo is a puzzle-platformer, albeit more the former than the latter. You wake up in a dungeon and have to escape, room by room. You do this by reaching the exit of each room. Naturally, in the beginning, this is almost as easy as climbing stairs, but the game quickly starts throwing a lot of obstacles in your way, and virtually everything can kill you, up to and including gravity. Most of the stages frame the challenge around a few reliable hazards, such as fire, spikes, and lasers, but even late into the game, new traps are introduced, so you’ll have to keep on your toes. Some of the stages are pure platforming challenges, but these stages are few and far between. Most of the time, you’ll need to clear a path to the goal by manipulating certain blocks you’ll find in each level.

Initially, all you can do is walk left and right and jump, but you’ll soon get your first of four abilities that allow you to play around with the blocks in particular ways. You’ll first be able to move them up and down, then left and right, then rotate them, and finally make them non-solid and back again. The abilities that are available to you depends on the level, so you won’t be able to come back to an earlier stage with a later ability and roll over it. Moreover, each stage awards a crown for completing it within a certain number of uses of these powers, so you’ll need to learn to be efficient. 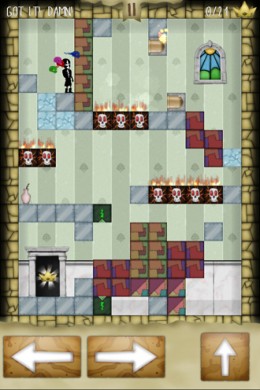 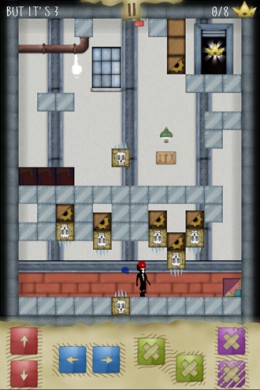 The puzzles start off pretty easy, and even late in the game, they aren’t too taxing as long as you don’t care about getting the crowns. If you do, the game gets rather hard to figure out in places, and you’ll have to examine the stage very carefully before you commit to any moves. There is often more than one way to get the crown, though some stages clearly have just one optimal solution. Whether you’re going for the crowns or not, Kyubo is very good at giving you that feeling of accomplishment for solving a stage. Unfortunately, while the puzzles themselves are on a very gentle yet challenging curve, one aspect of the game seems to throw a wrench into the works on a frustratingly regular basis.

I used to think virtual controls and platformers were a match forged in hell. Little by little, though, I’ve warmed to them thanks to some games that implement them very well, like the League of Evil games. I no longer think they’re unworkable, just that they’re very hard to implement well. I wish I could tell you that Kyubo implements them well, but that would be a lie. It has that annoying problem some games have of not registering your touch on the directions if you move your finger too quickly from one button to the next. The physics of your main character are already pretty floaty and highly dependent on inertia, and one wrong step can easily result in your carefully crafted puzzle solution being dashed upon the rocks. There are a couple points early in the game where the failures of the controls create choking points that should not be there. The path to the goal is clear, but getting your character to do a fairly simple platforming task is maddeningly hard.

As the game goes on, the stage design gives way more and more to puzzle challenges as opposed to platform challenges, which alleviates the issues to an extent, and you will probably adjust somewhat to the character’s severe floatiness, but right up until the very end, you’ll never really feel content with the controls. Some other players I know quit the game very quickly because of this problem, and I very nearly did as well. I kept going, and I’m very glad I did because it’s a wonderful game, but the controls are a serious problem that I hope will be addressed in future games from Chestnut Studio.

One last point I want to talk about is the atmosphere of the game. Kyubo is not going to get in your face with its story, but there is a lot of subtle storytelling going on as you progress. Little touches here and there, such as inconsequential (in game play terms) items that your character will comment on or little visual flourishes in the backgrounds, go a long way towards establishing an air of mystery. The music fits the game very well. It’s quite relaxing, but also helps add to the somber tone. There are some unfortunate English errors here and there, and quite large ones at that, which sometimes pull you out of the moment, but the meaning is still usually clear. As you approach the end of Kyubo‘s 80 stages, you’ll probably be genuinely interested in seeing how things wrap up.

It’s very frustrating to see a game that does almost everything right get held back by the one thing it does wrong, but that describes Kyubo to a tee. This is an excellent, compelling game, with interesting visual design, a great mood, a subtle but effective story, and awesome level designs that constantly offer new challenges. I want to give it my strongest recommendation because I really had a great time with it, overall. However, the controls are just so imprecise and fussy for a game that frequently demands precision, that I have to recommend it with a condition. If you can stick with the game to the point that you get used to the control issues, you’ll probably fall in love with Kyubo, but it’s no small hurdle.