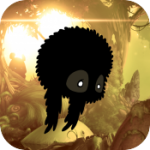 If you’ve been staying on top of your good game releases, then you should be familiar with Frogmind’s atmospheric “flap-former" Badland ($0.99). Its crazy physics, simple controls, stylish look, and cleverly-designed levels are all big reasons why we really dug Badland in our review from back in April. And if you are familiar with Badland, then you’re probably also familiar with how it’s structured: basically the game is divided into different Days, which are further divided up into the different times of day.

It’s a neat way to break the game into chunks that is less generic than saying just World 1 or Level 1. While the original release of Badland contained just the first Day, an update hit at the end of May which began Day II with 10 brand new “Dawn" levels, as well as some new missions and achievements. Today, the next phase of Day II has hit in a new update which adds 10 more new levels set during “Noon" and again bringing 30 more missions and 5 new achievements to the game.

More than likely, this whole Day continuation thing is just going to keep chugging on, adding new packs of levels until Day II is finished off and then after that hopefully moving on to Day III. However, Frogmind has mentioned that the next update will focus on more multiplayer levels, and since Badland has a sweet same-device multiplayer mode I’m definitely excited to see more of it. At any rate, if you haven’t checked out Badland yet, what exactly are you waiting for?