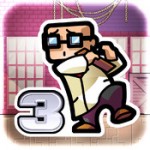 It’s a big night for “masocore" fans with iPhones and iPads. League of Evil 3 is on the way, finally bringing its brand of “tough as nails" play to the US at around 11:00PM on the East coast. In a lot of ways, it’s a safe continuation to the franchise. It doesn’t actively try to freshen the formula up with original mechanics or whatever. Instead, it does the usual sequel thing and offers more: more levels, more obstacles, more punching, and more sick double jumps and wall jumps.

The tried-and-true mechanics are still good, by the way. The jumping, running, sliding, and general hazard avoidance work well and, maybe more importantly, feel responsive. The game’s overall pacing is still ridiculously snappy, while the level design continues to be demonic. If you want challenge, this is your game.

One newer feature is video replay via Everyplay. Nail an ill jump and want to share it? You can pretty easily. In the background, the functionality records video of every run, and you can choose to share that video by just clicking through a few menus. Super simple.

Anyway, if you’re looking for another League of Evil game, this one’s a good one to go with. It might do a lot of the same stuff, but it’s all well realized. It makes you wonder, though, where the series can go and what it can do down the road.

You can get an alert as soon as it hits wide if you throw the game on our app’s (Free) Watch List , by the way.