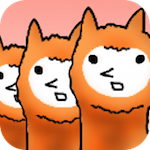 Alpaca Evolution (Free) is a weird game. Actually, it’s not really even a game. It’s definitely not one by traditional standards, at least. In it, you play as an alpaca with a problem. You’re a genetic freak, capable of eating other alpacas and evolving into something … better? Newer? More fantastic? Either way, you’re tasked with killing and eating other alpacas. After you’ve devoured enough, you transform into a bigger, nastier alpaca than before. And, well, that’s about it.

The thing that makes this work is hard to define. The game’s art is odd. Alpacas look like broken, weird versions of the animal. Also, the game’s writing is witty. I can’t tell if it’s intentional or not, though. Like I said, this is hard to define, so why don’t you watch this video to see the game in action instead:

You can experience Alpaca Evolution now if you want, but warning, you’ll keep checking the app hourly on your quest to devour and evolve.