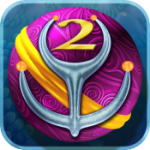 While many genres have seen dramatic changes and improvements on iOS, one area that hasn’t seen much in terms of advancement is the casual marble shooter genre. Of course, when heavyweights such as Zuma and Luxor are available, there may not be much incentive to begin with.

Still, 10tons took on the challenge with Sparkle, a competent marble shooter with its own style and feel. With Sparkle 2 ($6.99), 10tons has done an even better job putting its own mark on the genre with high production values and its own spin on the gameplay, even if the core gameplay essentially feels ‘more of the same.’

Gameplay-wise, genre fans will quickly feel right at home with Sparkle 2. Players are charged with using a marble shooter to match three marbles of the same color against a long snake of orbs that moves towards an exit. Taking out marbles rewards runes, which allow players to eventually halt the tide of marble sand advance to the next mission. 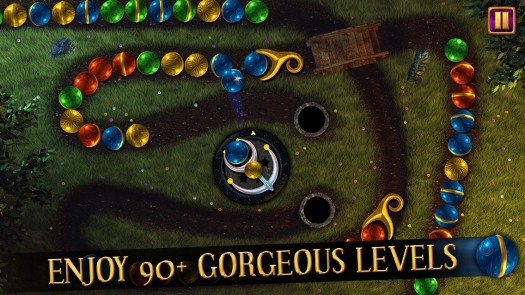 Players are also periodically rewarded with weapons, which range from the strategic (such as an AoE that changes the colors of the marbles it hits) to the tactical (a sphere-based projectile that takes out all the marbles). Levels vary by a variety of different parameters such as marble color, paths, snake speed, and even multiple chains and exits to keep track of.

While there really isn’t anything dramatically revolutionary from a gameplay perspective, I still enjoyed Sparkle 2‘s presentation, pace and difficulty curve. Sparkle 2‘s art style is whimsical, yet dark and does a great job (along with the music) in setting the tone for the overall game. The game also feels a lot more fast-paced than my experience with other marble shooters.

Yet, despite the seemingly hectic play, the game does a great job giving players the right power-ups and opportunities at the right time to feel like a badass. This goes hand-in-hand with the difficulty curve, which starts off slow but quickly hits a sweet spot for keeping players engaged. The same goes for the game’s long-term upgrade system which, while simplistic, offers some opportunity for players to customize and fine-tune their playing experience.

While the above will feel pretty familiar, Sparkle 2 attempts to differentiate itself is with its actual inclusion of an overarching story. True, the story is relatively simplistic and centers around a search for magical keys that have the power to unlock the magic of the land and free your soul, but decent cutscenes and voiceovers provide some feeling of narrative flair that is usually missing in these kinds of puzzle games. When you combine that with the above, it’s not hard to see that 10tons has gone the extra mile.

Unfortunately, the impressive sheen doesn’t help the fact that Sparkle 2‘s gameplay is rather repetitive and may not offer enough to keep players engaged for the 90 levels the game offers. Players don’t see much in terms of dramatic new mechanics after the beginning portions of the game; instead Sparkle 2 elects to throw more of the same at different speeds and environments. Of course, a puzzle game of this nature is inherently repetitious at some level, but it still would have been nice to have had more variety.

Still, that shouldn’t take away from the fact that Sparkle 2 is a competent marble-shooter, a decent sequel and a worthwhile game for genre fans. Assuming you don’t mind a game that, while presenting itself well doesn’t offer much in terms of innovation, you can do a lot worse than checking out 10tons latest title. Just make sure that your expectations are tempered ahead of time.