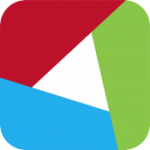 Once upon a time, there was a great game called Super Hexagon ($2.99). It was a very primal sort of gaming experience, and its fun was matched only by its difficulty. Well, thanks to the popularity of that game, vaguely similar games have started to appear.

These games are generally about rotating the screen around some sort of centered object, or rotating a centered object to deal with incoming objects. I hope someday someone comes up with a pithy name for this new genre, because then I wouldn’t have to write such a long introduction to tell you about PYXL ($0.99).

PYXL supposedly tells us the tale of a baby pixel who dreams of becoming a full pixel someday. The baby pixel is actually a triangle and not a pixel at all, but one must be willing to suspend their disbelief to enjoy gaming sometimes, I suppose. How does the baby pixel become a full pixel? Well, near as I can tell, little PYXL does it by spinning his three sides around and collecting appropriately colored dots coming towards him. 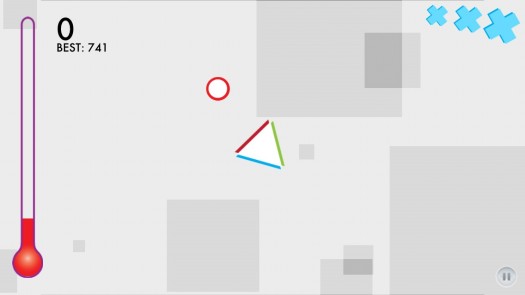 Dots come in four colors: red, green, and blue. Each correspond to one side of the triangle, and need to be collected by rotating PYXL around with your finger and touching them with the correctly-colored side. The fourth color is black, which must be eliminated by tapping them. If a black dot or an inappropriately colored dot touches PYXL, it counts as a strike, and like in every sport called baseball, three strikes means you’re out.

As you’d expect, the dots come in greater numbers and speed the longer you survive. The goal is to earn as many points as you can before you become a dead pixel. It bears a passing (coincidental, according to the developer) resemblence to a similar game called Firewall, but distinguishes itself with tighter controls and considerably more severe punishment for mistakes

PYXL is a pretty spartan experience. The user interface is very clean and attractive, and the graphics during gameplay are simple and easy on the eye. Sound effects are almost entirely limited to running through the musical scale on a piano, and there is no background music at all. The game could definitely use some sprucing up on the audio end of things.

As far as options go, you can turn off the sound effects, and choose from four difficulty levels. The difficulty level determines how fast and numerous the incoming dots are, along with how many points you’ll get for collecting them. Even on the easiest difficulty, the game is fairly challenging. The ‘ridiculous’ difficulty setting is no false advertisement. 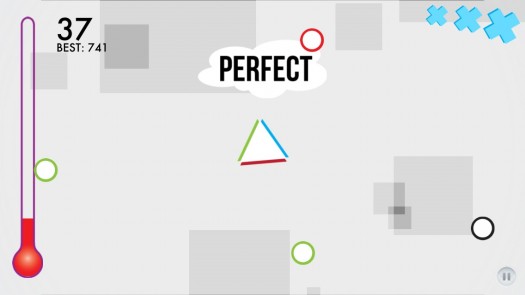 There aren’t many bells and whistles to be found here, but the core gameplay experience is a good one. Like many games with simple rules and high difficulty, you’ll find yourself coming back for another play and getting better with each go. When you strike out, the game thankfully gets you back in the action almost immediately, so if you have a bit of a zen trance going on, it won’t be disrupted by loading screens.

It’s a shame there isn’t any great background music to help contribute to that gaming zen. It’s probably the biggest weakness of the game. PYXL is really fun, and if you liked Super Hexagon and want to check out something similar (if not as stylish), you should give it a look.