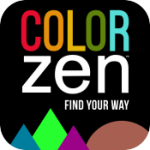 Some games just feel right. They scratch an itch I didn’t know I had, satisfy a craving, but keep whetting the appetite, leaving me hungry. It pleasures and pains me to say that Large Animal Games’ Color Zen (Free) left me starving for more.

Color Zen is an accurate title, one stop short of Move Multicolored Shapes and Make the Screen Pretty with the Colors and the Nice Music Playing and also Zen, which would be a more accurate title. In every stage, you have to make the entire screen the same color as the level’s border. You do this by moving colors into one another. Mash two reds together and the whole background turns red. As the game progresses, new wrinkles, like white shapes that fill the screen with any color or black shapes that erase both objects, add variety to the simple gameplay.

For Color Zen, simplicity is an asset. The rules are always clear and simple, so finishing a stage doesn’t rely on bells and whistles. Just considering the order and placement of the color palette presented. There’s no timer, no score, and nothing on the screen but color.

This is the kind of game you want to show off. It’s beautiful, and watching the colors ooze across the screen never gets old. In the game’s finest moments, the shapes, simple and bold, evoke Saul Bass, the master of the brutal simplicity. And Steve Woodzell provides some nice, trippy music. Groovy stuff.

And the Color Zen really gets the player into that zen state. Early levels are incredibly easy, and I’d go from level to level without thinking. When one stage is finished, the camera zooms out, revealing that stage was a small portion of the next stage. It’s sort of the way Mr. Show and Monty Python used to transition between sketches, and it makes 20 consecutive levels a seamless experience.

As games like this go on, the difficulty usually ratchets up. Unfortunately, this never does. I breezed through the initial 120 levels within a couple hours, and without much thought put into each stage. The most I spent on any one level was probably five minutes. Most stages don’t require more thought than just trying out different things a few times. I finished nearly every stage with no clear strategy. This is super casual gaming, and I wanted more depth. There is, however, an additional level pack you can purchase as IAP if you crave some more.

Color Zen had me thinking of Eliss, but where Eliss kept me coming back for more punishment, Color Zen is a wisp of a game. It’s pleasant but shallow. That said, I recommend Color Zen unequivocally, and I’d easily plop down more money for even more content, especially if it gets more difficult. I’ve tasted the appetizer and I’m ready for the main course.