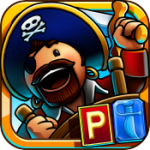 Guys. Real talk for a minute: Puzzle Pirates (Free) is good. Real good. Originally released in 2003, there’s been a slow drizzle of new content added to the game since them in the form of new puzzles, new gear, and more things to do. The iOS version just hit the App Store, and initial impressions seem to dictate that this is a ridiculously faithful and fully functioning port of the PC version which basically signals the end of my real-world social life as I knew it.

See, what makes Puzzle Pirates so good is that it totally scratches that MMORPG itch… But unlike typical MMO’s where your success and progression in the game is very directly linked to how much time you sink in to it, Puzzle Pirates is all about solving puzzles to do almost every action in the game. Want to go out plundering on a ship? There’s a puzzle for every function from pumping the bilge to actually navigating. It’s super clever.

Anyway, we’ll get into much more detail on the game soon, I’ve got it downloading on to my iPad as quickly as it can. I loved Puzzle Pirates on the PC though, and even with a half-way competent touch control scheme this is going to be something every puzzle fanatic needs to try.