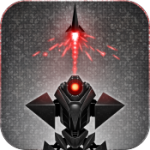 I’m going to come straight out and say it. Don’t read any further unless you love a challenge and by a challenge I mean one hell of a challenge. Jet Point (Free) from YoRooster Studios is a game that makes the task of dragging yourself up Mt. Everest with your tongue seem like a pleasant day trip. It makes beating the world record for a 100m sprint, without the use of your legs, appear to be a reasonable achievement and, I dare say, this game would make Chuck Norris’s eye-holes leak like fountains and draw girl noises from his mouth. Calling this game hard is like saying Jessica Alba is “okay looking". Difficulty aside, Jet Point has certain qualities that make it worth giving the time to review.

Jet Point is beautiful. The sprite animation is some of the nicest I have seen in a 2D game, despite the complaints about the main character’s animation in the forums. I’m not actually quite sure what the complaints are about, as the animation is smooth and fluid… his little legs dangle realistically and react to the forces applied by the jetpack. It’s subtle, but very well done.

In Jet Point, you take control of one of an unlimited supply of human clones (trust me, they need to be unlimited) in a series of intense experiments in which you have to fly around with your jetpack and destroy the reactor cores dotted around each stage. The game starts off by telling you how to control your clone and then you’re left to find out just how frustrating a game can be. If you don’t throw your phone at the nearest person or pet’s head, I worship you. 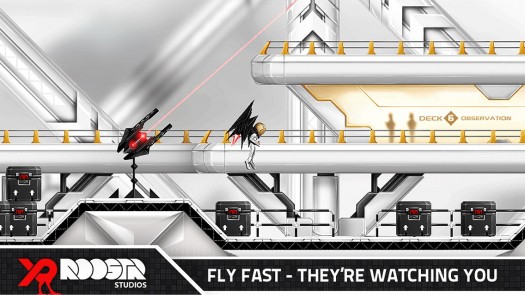 In order to play, you simply tap the screen in the direction you’d like your jetpack to propel you. This is extremely tricky at first, as you have to fight with inertia, so you can expect yourself to be doing more dying than flying for the first few (or in my case, many) attempts. Keep at it, though and you’ll soon be flying around like a seasoned vet. The controls are actually pretty neat and the physics spot on… just remember to use little bursts, instead of great big thrusts, or you’ll build up speed and the stinky stuff will hit the fan.

Where the physics don’t quite stack up is when you encounter a wall, floor, or ceiling… the developer has decided that these clones ought to be bouncy. It’s totally unrealistic, as we all know that meat doesn’t bounce and at first it is more frustrating than a year-long bout of the hiccups. However, it soon becomes apparent that this odd design choice is actually a bit of a stroke of genius. You see, to destroy the reactors, your clone needs to fly within close proximity to a missile launcher, triggering a homing projectile that follows the clone. Place the reactor between yourself and the missile and Bob’s your uncle, bammo!

The problem is, if you don’t have enough speed when you trigger the missiles, they’ll leave you painting the walls with your innards and cussing like a drunken sailor. This is where the bouncing comes into play… simply hover over the launcher, drop straight down and you’ll be bounced back into the sky rapidly, putting distance between you and the missile.

Once you destroy the reactors, you need to find the exit platform and gently float down onto it, so as not to bounce. Each level is timed and once you actually manage to finish a stage or two, you’ll find yourself going back to beat your best attempts.

Jet Point is only supplied with twelve levels (more to come), but trust me, you won’t be beating them quickly. I got stuck on level five for so long, I actually had to contact the developer, Daniel Rossiter, for a custom version of the game with all levels unlocked.

After the hair-pulling frustration that is level five, you are introduced to the ability to carry projectiles. These are housed inside large cubes that must be smashed, spilling smaller red cubes that you simply fly into to collect. Once armed, you hit the fire button to throw the cube, hopefully hitting your target.

This addition certainly makes it easier to destroy the reactors but by no means does the game ever get easy. In fact, Jet Point is too hard for mere mortals. I have watched gameplay videos of Daniel, and even his eleven year old nephew, making it look as easy as breathing and I know exactly how to beat the levels, but it’s just not easily done if you didn’t design or have a large part of designing the game yourself.

Daniel admits that this is his first game and is currently tweaking the difficulty to make the experience more user-friendly, but until then I recommend you only pick it up if you really want a challenge or feel like supporting a developer who I feel is going to offer up some pretty damned neat stuff in future. Jet Point is a visual treat and has loads of potential but at this stage it’s just too darned hard for the average gamer. A few small fixes and Jet Point could easily attract a stronger recommendation.