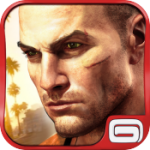 I’ll get this out of the way quick so I don’t need to waste your time later – Gangstar Vegas is, in most ways, identical to Grand Theft Auto, from the way the missions are given to the dialog while driving to the types of missions available. The game also doesn’t drastically change the way the other three Gangstar games played, but it does refine some mechanics from the previous ones.

As Jason Malone, a boxer who gets paid to take a dive by mobster Frank Valieno, you agree to throw the match, but during one round, you manage to get a hit in and you knock the other guy out cold. You win the fight, and while you didn’t mean to, you’re now on Frank’s hit list. During this interactive prologue, you’re introduced to the hand-to-hand fighting controls.

Vegas’ tutorial introduces you to the main aspects of the game while documenting your escape from Frank. Everything is pretty straightforward. You’re able to steer your vehicle by tilting, but I found I was tilting my iPad like a wild man and still couldn’t get around corners that easily. I fiddled with the sensitivity, but eventually just swapped to the virtual button steering option. You’re able to change the control type for each different vehicle, should you be so inclined. 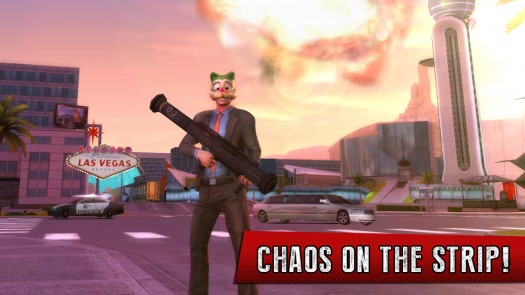 Vegas is fully voice acted, and runs the gamut from good acting to that of Resident Evil (1996) quality. Jason himself is very hit and miss. Sometimes he’s into it, sometimes it sounds like he’s bored and wants to get the headset off. Karen, one of the first characters you meet, is believable, as is Vera, who is Karen’s boss. The remaining cast is amateur, but gets the job done; with the exception of E-Man. He’s an annoying character, and if I were Jason, I’d torture him constantly just to get him to shut up.

Controlling Jason is fairly painful, and will require some getting used to. Running is a hassle, and is overly sensitive (even with sensitivity turned down). He tends to walk into walls often, and when you move in the opposite direction, he tends to run into the wall before finally getting his feet. When you add sprinting to the mix it’s even worse. In order to climb obstacles you need to sprint as you run toward whatever it is, however I find Jason likes to jump over everything and anything even when I’m not all that close to the object.

Driving handles much better than walking and running, but manages to feel sloppy and stiff, both at once. It’s not hard to drift around corners or do 180’s, but the way the vehicle manages to magically right itself after completing the turn is slightly jarring. Apparently, vehicles in Vegas don’t come equipped with horns. 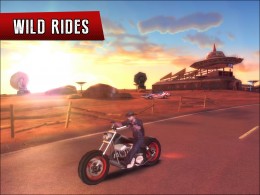 Graphically, the game is well done. Characters all have unique faces and bodies, and the attention to detail is pretty nice. Lights reflect, water ripples nicely, and your tires squeal and emit smoke appropriately. There are, however, some minor glitches that pop up. You’ll see car doors that look raised or lowered above the rest of the car body, you’ll fall through the world quickly just to pop right back up, and cars will get “impaled” with curbs, trees and other random objects. Collision detection sure isn’t that great here.

The biggest gripe I have graphically is when cars, people and objects pop up right in front of you. This seems to happen the most as you’re driving along nicely, only to crash into something that wasn’t there a second ago. Poor programming, or perhaps a limitation of iOS and its memory? You’ll eventually come to anticipate and adjust your car accordingly, but it’s still annoying.

There is a lot to do in Gangstar Vegas, and you will never be at a loss of where to go or what to do. Story missions are easily identifiable, and one of the features I quite liked is the option to start a story mission from the map screen. If you don’t feel like driving to a start point, open the map, select the story mission, and begin the event. You’re taken to the cut scene that introduces the mission, and then it begins. This applies to all secondary game types as well.

You’re able to ask friends for help on a mission. If you have no friends, you’re limited to just asking E-Man, and the price starts at $100,000. By asking an actual friend, not only do you get help in the mission, but your friend will receive a reward for helping as well. 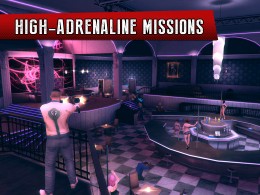 Gun play is very straightforward. There is no free aim mode; instead, you look where you want to aim, and tap on a person or object to target, which paints a big blue crosshair over top. You can then fire. Vegas also utilizes a cover system, that lets you crouch behind objects or shimmy along walls. While this is a nice feature, the majority of missions involving firefights sadly devolve into crouch, fire at enemy until ammo runs out, crouch, reload, fire at enemy, rinse and repeat.

Every criminal act you do is tallied and you’ll eventually receive a badge icon, indicating the police are after you. With one star, you’ll have one or two cops after you, but they get more aggressive as you gain in stars, and by the time you reach the max (five), you’ll have cops, SWAT and the army after you.

But not to worry. If you die, you get resurrected and will be out some cash for hospital bills. Oddly, the cops never seem to want to arrest you. I beat up a guy in front of a cop, which triggered a star. The cop came and starting beating me. For testing purposes, I sat back and let him do his thing… until I was dead. The AI occasionally gets stuck behind or in objects, making targeting impossible. Two missions I had to abandon and restart because I couldn’t kill what the game needed to let me advance. The other cars throughout the world have this weird tendency to stop driving, back up, and then drive into barriers, for no reason whatsoever. Or they’ll drive over a bridge. Or just stop in the middle of the road. The AI definitely leaves a lot to be desired. 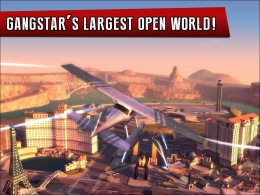 As you progress your character levels up. With each new level you earn skill points, which can be used to purchase upgrades. And boy, are there a lot of upgrades. There are different weapon categories; hand-to-hand, pistols, shotguns, rifles, etc., and under each category you can improve different ratings. You can increase clip size, cause more damage, or reduce reload time. You can also increase your resistance to bullets, fire or explosions, and how many healthpacks or armor kits you can carry. In addition, you can also increase top speed, acceleration and handling for vehicles, in each category (cars, boats, motorcycles, planes). In this way, Vegas gives you an almost infinite level of customization.

Completing missions and killing people will also randomly drop items, which can be used to customize Jason, or you can purchase new items at the pawn shop. If that innocent old lady drops “Shave Cut #2”, for example, you can use it to change Jason’s hair style.

While the normal store is easily accessible and allows you to buy new weapons, ammo, vehicles and health or armor (even while in the middle of a story mission), the pawn shop is where you can buy unique items. To do so, you’ll need to have collected pieces of what you want to purchase, or you can spend some of your blood money to do so. Going out and finding high value targets, who usually are standing around or driving in limos and are signified with a briefcase above their head, can yield some of the components required. The list of items available in the pawn shop updates every thirty minutes, and you can count on Connection Johnny (yes, that’s his name) to always have top items. 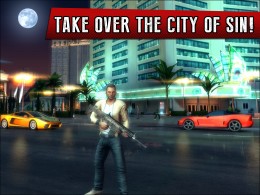 Once you’ve completed the story, or simply want to take a break, feel free to try one of the many other events going on. Unlocking certain events requires you to advance to a certain point in the story, but eventually you’ll be able to take part in street races, flight checkpoints, boat races, ring challenges, time attack races and stadium motocross tracks. Each side mission rates you on a scale of one to three stars, depending on if you complete the mission within the time or target requirements.

In addition to races, you can compete in fighting tournaments, go on multi-faceted bank heists, attempt to survive a consistent onslaught of enemies and, my favorite, Carnage missions, which basically task you with destroying as much as you can in a set time.

If you don’t feel like racing or killing, you can steal cars and drop them off at garages for money, or play various casino games, like blackjack, slots and video poker. Why not visit the dollar store, check out a nightclub, or see what restaurants are on offer?

Or, you can purchase properties. There are five districts that make up Vegas, each of which has four properties available. By buying one, you generate income that you can collect every so often. Some you can collect in as little as thirty minutes, others might be twelve hours. You’re also able to fast travel to any property you own, without cost.

And while you might think your actions are for naught, don’t fret. Not only is there a leaderboard that shows your progress but the game has a huge amount of stat tracking; cops, enemies and pedestrians you’ve killed, time traveled on foot, or by car, how many times you’ve been killed or died. It’s pretty in-depth.

Gangstar Vegas also features tattoos that you can earn, which are awarded at the end of a mission, and  increases your overall score. Kill 25 gang members during a mission, for example. Tattoos exist outside of the mission structure as well, such as jumping off ramps 25 times with a vehicle.

There are also a total of 180 pickups to find; 60 each of clothing, weapons and wheels. Collecting them earns you about $500 each, while collecting all 60 will earn you a special reward.

There are three types of IAP’s which you can choose to utilize in Gangstar Vegas. You can buy cash straight-up, or if you don’t want to earn skill points through playing, or just want to make Jason a badass, you can buy those too. Finally, you can buy keys, which are used to open crates that can contain great items. Keys can very rarely be found while completing missions, and if you gamble enough, you can earn them. Whether you choose to buy something or not, none of the IAP’s are essential to enjoying the game.

The bottom line is, Gangstar Vegas is a great open-ended game, with lots of variety and lots to do, and will keep you playing. The dialog, which is only marred by the acting, is humorous, as are the news reports and the in-vehicle conversations. The races will keep you coming back, and if you’re anything like me, the graphical glitches and inconsistencies won’t keep you from trying to achieve a perfect three-star rating on each and every race, challenge and heist, for the sole purpose of seeing your game completion status jump to 100%.