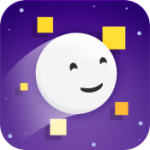 Now I’m not usually one to pick up a puzzle game, partly because there are so many of them crowding the App Store that are simply below average, but mostly because my brain is as good at solving problems as a goat is at knitting a car. But when I saw the pixel art screen shots, I had to download Little Luca ($0.99), as being a ’70s baby I am a sucker for anything 8-bit. Luckily, the cutesy low-fi images aren’t the only good thing about this game… far from it.

I’ll get straight to the point, Little Luca is a stunner. The world that Swedish brothers Björn and Rikard Wissing of Glowingpine Studios have created is so beautifully crafted, you can literally taste the love seeping out of the screen. Okay, that came out kind of wrong and is totally disgusting, but this game is anything but. From the choice of the color scheme to the soundtrack that is as atmospheric as, well… the atmosphere, every aspect of Little Luca has been done just right.

Inspired by a small Flash game by the name of Flabby Physics, Little Luca is a ninety-level-environmental-manipulation-physics-based-puzzle-game, for lack of a better term. You start out faced with relatively simple geometric shapes, such as deflated balls that resemble chunky bananas, and at the touch of the screen, said shapes inflate. 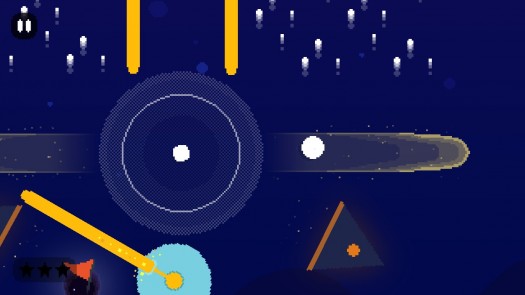 These morphing shapes are used to bounce the hero of the game, Luca’s friend, a small ball (he’s an odd kid), around the environment on the way to the end goal. I’m putting this across as eloquently as one of George W. Bush’s speeches but rest assured, the idea works and it works very well.

In a nutshell, the hero ball starts at a predetermined position on the screen, usually above a deflated object. When you tap the screen, the ball is released and it’s up to you to decide when to inflate the object. Think of it as a small child on a deflated bouncy castle – if the kid is in the middle as the castle quickly inflates, the child will be sent straight up in the air, only to return to the pillowy safety of the castle floor. If he’s on the edge, he’ll be blasted off into the hotdog stand, where he’ll more than likely sustain horrendous injuries, so you have to time the inflation just right.

Of course, there is far more to this game than just the geometric manipulation. You soon find yourself being introduced to other environmental objects such as gravity fields, wind, and large planets that suck in your ball and spew it out in a gust. The game comes into its own when you start putting all of these environmental elements together and controlling them with a single finger. It quickly becomes very challenging, yet never frustrating.

For example, you may have to bounce the ball from a deflated object, into a gravity field, but between the two objects is a blast of wind. Imagine that the finger press controls all three, simultaneously inflating the object, speeding up the wind and activating the gravity field… you’ll soon learn that the wind will see that kid off into the hotdog stand again. As a result, you’ll need to release the screen press for the ball to safely pass through the wind, then hit it again to activate the gravity field. Once again, I’m explaining this with the ability of a brick but trust me, the game is far more graceful and is very self-explanatory.

On top of all the gravity-warping, wind-blowing, ball-inflating shenanigans, you have to try to collect the three golden stars that are dotted around each stage and these can be placed in some very tricky positions, indeed. This takes the game to a whole new level.

Sure, you can just reach the goal, but if you fail to collect the stars, you won’t be able to unlock the next world and move onwards. And considering the story of the game revolves around the stars disappearing, it’s kind of important. You won’t want to miss the stars, anyway – it’s just way too much of a feeling of achievement when you obtain all three. You even get a little pixelated ticker tape parade and fireworks display, worthy of some clapping like an excited kid.

Little Luca is a charming, innovative and downright beautiful game – nay, piece of art – that no iOS user should be without. The worlds are beautifully crafted and immersive and you’ll be hard-pressed to find anything that oozes as much charm. As I said earlier, I’m not usually one for puzzle games, but this is so much more… it’s a beautiful experience, made even more amazing by the fact that it is Glowingpine’s first ever game. I am simply stunned. Grab this game now.