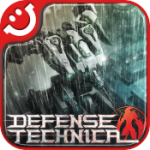 It’s standard tower defense every sense, from Com2uS, the guys behind the game actually titled Tower Defense ($0.99). Defense Technica ($2.99) gives you a power core whose innards are particularly delicious looking to the alien hordes. They trample blindly toward it, ignoring your defenses until they find themselves without a route to their objective. You cobble together said defenses with the guts and gore, or a nameless resource, left by their corpses.

Variety exists on both sides. Enemies assume different shapes, sizes, and armor types, and towers gain different strengths against each. Flames incinerate tight groups of small biological units quite well, bladed stabber towers nicely puncture mechanical foes, et cetera. With a tap and selection from a radial menu, upgradeable towers plop down on preset squares, sometimes allowing you to redirect the mindless flow of targets to your advantage. 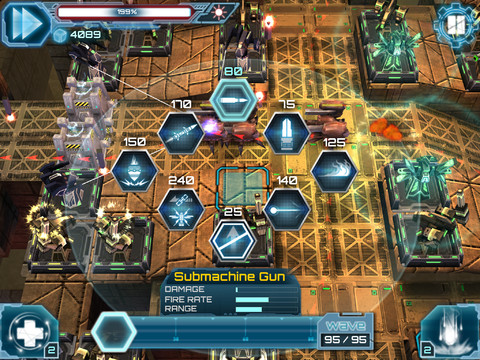 In the event you can build yourself a maze, you’ve got the option of spending crystals to reveal the most effectively squiggely path. This persistent resource is slowly accumulated by completing stages, the sum awarded dependent upon your performance. Even if you score aces each time you play, however, you won’t have enough crystals to fund best path revelation each mission. Should you decide to save up, there’s a luck-based card system to drop your excess on.

These offer enduring bonuses such as reduced build costs, potentially having dramatic a dramatic effect on gameplay. Unfortunately, the odds are stacked against you and it’ll take an age to earn enough crystals to get anywhere by normal means. Luckily, you can spend real cash to buy crystals! Hooray. It’s possible to progress without dipping into the wallet, but I get the sensation the difficulty is tuned to make you want to. The urge to pay up lingers.

IAP woes aside, however, Defense Technica is still a well put together game in the respects that matter most. Turrets hit a nice chunky mechanical feel, machine guns sound rusty and rattly, and some of the enemy models look rather neat. It’s a bit of a looker, albeit a generic one. Grinding enemies is satisfying, levels vary in construction, and strategy is malleable.

On the other hand, the story is utterly forgettable and could have been completely excised without much impact. Some subtle grammar and spelling issues rear their heads as well, but they kind of add to the Korean import charm.

You’ll scratch your tower defense itch with this one, but likely won’t remember it for long. It competently hits the right notes while never presenting anything new or interesting. There’s little creativity, but there’s effective design. In a genre so saturated as TD, however, it takes both to stand out.