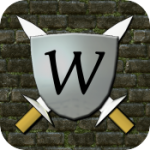 WazHack (Free) is an educational game. It teaches core success skills, like “eat your Orc while it’s fresh," “don’t take your pet skeleton to church," “just because you’ve found Mjolnir doesn’t mean you’re worthy to wield it," and “you will die."

Okay, so WazHack is a roguelike, and one that owes a lot to Nethack (Free), including a turn-based mechanic, shopkeepers who will mess you up if you screw with them, and the permadeath.

The fundamentals are traditional, staples, but this game does a lot to make itself a very engaging and moble-friendly roguelike. First, there’s the fact that it’s side-scrolling. This makes each new level of the dungeon of Waz manageable in scope, makes creating choke points easier, and allows for a crystal-clear automap that takes most of the memory work out of moving back up the dungeon to visit merchants or collect cached supplies. As Jared noted in his First Impression, the game’s pricing is generous: try all eight classes for free, and buy the ones you like in two-packs for 99¢ each. That’s it for IAP. 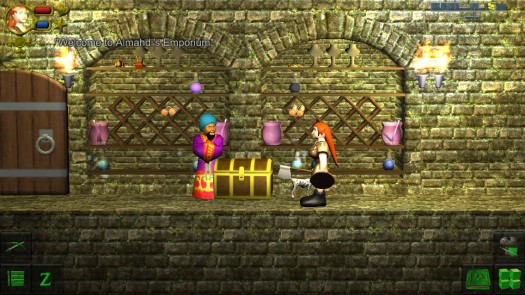 The game’s interface was designed for touch screens but isn’t perfect: it’s too easy to order your hero to move when you’re trying to select your portrait, and to change your aim with a ranged attack when you’re trying to confirm it. Also, until you figure out that you nearly always want to tap a destination rather than holding down on the direction you want to go, you’ll die many a pointless death and fall off every time you try to ascend a ladder.

Despite these quirks, the interface feels natural for touch, and WazHack’s interface possesses the clarity and ease of use that hardcore roguelikes are notorious for lacking. The interface is minimal until needed, then context menus and hotkey-like filters for your inventory pop up when you need them. Just remember that the filters associate with default actions, so if you want to throw, rather than quaff, that potion of blindness, you need the full inventory.

The game’s art is lucid rather than pretty, and some might even call it “crude and ugly." They’re missing the point: WazHack’s art is symbolic, like the ASCII of its ancestors, and generally provides a lot clearer sense of what is present and what is going on than either the no-frills, no-animation of a game like Brogue (Free), or the over-rendered and super-shaded art of a modern AAA game.

The clarity of the design and art makes it really easy to pick this game up and continue where you were, be that 5 minutes, two days or a week ago. It’s almost Tufteian. Of course, this all falls apart in the few instances when the game suddenly asks you to type in what you want (controlled polymorph and wishing).

All this makes the game really easy to put down and pick back up again, assuming you can bear to put it down. Right now, Emma the Frosty, my 11th level White Witch, is busy confounding a Roman Legion into fighting itself (and feeding their corpses to her pet wolf). She’s invisible, regenerates mana like a mofo, and is rocking a turban with her +2 blessed Japanese Robe, courtesy of a Jinni and a Tengu respectively.

At this point, I think only the anticipated iPad release of Dungeons of Dredmor might draw me away from WazHack – and I’m not even sure about that.