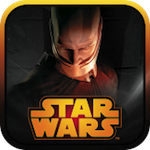 There’s not much to say about Star Wars: Knights of the Old Republic ($9.99) that hasn’t already been said. I mean, yeah, it’s a sprawling RPG. And yeah, the dialogue and story rock as hard as the characters and round-based combat system also rock. It’s a good video game, as I’m sure you’ve heard. You should probably buy it.

What interested me about the iPad version in particular was just the opportunity to play and view the game in a modern context. A lot of KOTOR‘s constituent parts informed a ton of BioWare’s future work, and maybe no game more than its own original sci-fi epic, Mass Effect. Name a big feature from that series and chances are its in KOTOR in some kind of shape or form. It’s sort of like a proto-Mass Effect.

Anyway, we gave it a spin this afternoon, starting from the Sith Base and go over some of the finer aspects of the game, including its combat mechanics and controls. You can peep the video just below:

Neat game, right? Also, can you believe it’s been 10 years since this thing came out? I feel old. Please tell me you feel old, too. We can be old together.