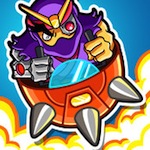 The titling kinda says it all. In Retro Dreamer’s upcoming SlamBots, you’re tasked with slamming various lo-fi creatures in an infinite quest for gold and high scores. You play as some sort of bouncy monster thing, endlessly bouncing and slamming objects so you can reach the river of gold coins flowing just slightly above your head. As far as my first impressions are concerned, it’s an OK game with a good idea that, maybe, doesn’t do enough with it.

Set across a handful of simple arenas, this is more of a game about familiarity than it is twitch-based skill. You slam the same monsters and bounce off the same pedestals over and over again, barely reaching the same everlasting wave of coins. Play it enough, and you’ll start counting on how, say, grounded monsters grow wings and fly upwards, giving you a bigger boost if you can slam their heads at the height of their climb. This isn’t a hard thing to do — it just requires experience. The same thing applies to the way you float between the level’s pedestals. Immediately smashing the ones that disappear after taking slam damage maximizes the potential that you’ll get a useful pedestal, like the one that gives you a mega jump boost, following the quick takedown. 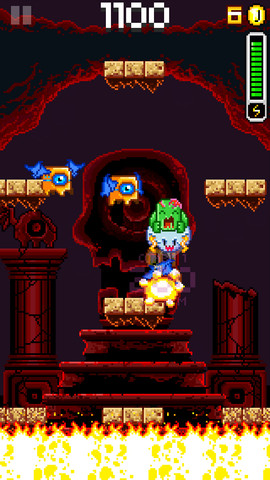 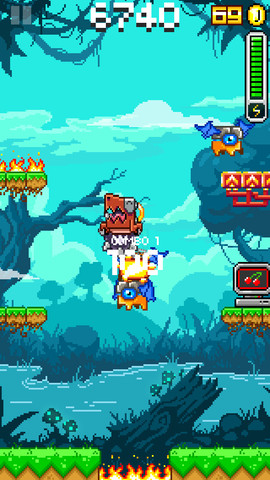 While that’s neat and all, I kinda wish there were more than just four platforms. Like, you play this and expect that there’s more than just the river of coins immediately above your head, but there doesn’t appear to be anything up there. No monsters, for example, give you incredible boosts, rocketing you up to a second or third or fourth tier of platforms. There’s just the one, simple set of platforms and one repeating set of monsters. There’s not enough action packed into its size to really make the game click with me, at least.

There are power-ups by the way. As you earn coins, you can use them to upgrade your slam capacity and increase the length of the powers-up that spawn randomly in the game. Also, you can buy levels and new characters. If playing through the game isn’t your thing, you can just straight-up buy coins through the game’s in-game store.

I’m not one for endless games anyway, but I see the potential of SlamBots for people out there who just want something quick and simple to play on a bus or whatever. Sessions tend to end pretty fast, and the mechanics don’t require all the much physical investment. Also, if you like faux-retro graphics, there’s plenty of that in here.

SlamBots should hit tonight around 11PM EST in the US. As always, you can add the game to your Watch List via our app (Free) and receive a notification whenever it hits.