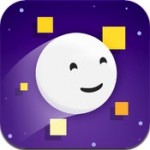 Simogo’s Bumpy Road ($2.99) was unique when it released back in 2011 because it took the basic endless runner formula and turned it on its ear by allowing you to control the environment in the game rather than the main characters directly. So, manipulating the ground by raising and lowing it you could push or bounce your character’s little car around to collect items and traverse the terrain. It was a fantastic fit for touchscreens and a genuinely fresh idea. If you were ever looking for a similar concept in the world of physics puzzlers, then Little Luca from Glowingpine Studios might be a game for you.

It takes basically that same idea – not controlling your actual character (which is really just a round ball thingy) but rather the environmental elements – and tasks you with completing cleverly-designed levels and collecting the standard-by-now 3 stars along the way. If this was just a regular physics puzzle game where you slingshot your ball character around, there wouldn’t be much to talk about. However, messing with the different environmental elements and sussing out how you’re supposed to discover and collect all 3 stars is actually really interesting so far.

The early levels in Little Luca are pretty much what you’d expect. Touching the ground will cause it to expand outward (or contract inward) so you can bop your little blob where it needs to go. As you can see from the trailer, though, things get pretty complex as you progress through the game. Eventually you’ll be controlling air currents, portals, gravity and orbital elements, and more.

There are 90 different levels across 3 different environments in Little Luca, with more said to be coming in the future via updates. There is also some subtext to all the physics puzzling, something about all the stars falling from the sky, but I’m not totally sure how this all relates to what you do in the game. I guess that’s why we’re always collecting stars in these physics puzzlers?  I’m not here for the story anyway, I’m just hooked on playing the game itself in my short time with it so far. It’s very clever.

If Little Luca has captured your interest too, then check out the forum discussion and add it to your TouchArcade (Free) app Watch List to get an alert when it hits the US App Store later tonight.