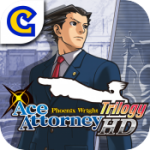 Ace Attorney: Phoenix Wright started out life on the Gameboy Advance system in Japan in 2001 and since then has seen multiple sequels, re-releases and even a spin-off. The original game has also seen a straight port to iPhone from the Nintendo DS. So, what makes this version so special, I hear you ask in your Barry White tone (okay, Betty White, in my case)?

Well! Ace Attorney: Phoenix Wright Trilogy HD (Free), as well as being a mouthful, marks the spikey-haired lawyer’s first encounter with the Retina display and what’s more, every case and trial from the original three games are available via IAP. You can even play one-handed in portrait mode, according to the official blurb. Though, try doing this on an iPad and you’ll either need a grotesquely giant hand or tentacles.

If you’ve been living under a rock for the last decade or so, the Ace Attorney games see you taking on the persona of a quirky, noob lawyer named Phoenix, who sports a hairstyle not unlike Sonic the Hedgehog’s and sweats a lot in an odd, manga fashion. 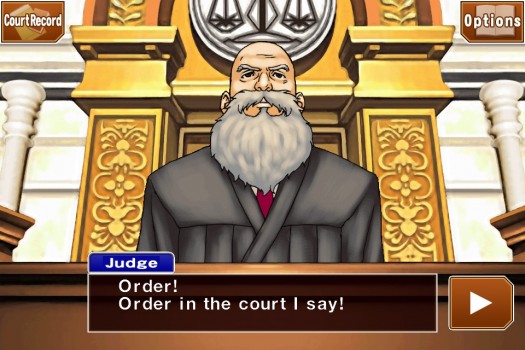 The games present your blustering barrister with several cases that need to be solved by a mix of good, old-fashioned point and click adventuring and intense courtroom battles, where you get to display your investigative prowess by pressing witnesses for information, uncovering lies by detecting contradictions in their statements, and presenting damning evidence.

The adventure aspect of the game is your typical point and click affair in which you can question persons of interest, examine locations and collate evidence for later use in the trials themselves. The investigative segments are seen through the eyes of Phoenix, whereas the courtroom sessions are viewed from the third-person perspective.

The meat and potatoes of the game happens inside the courtroom during the trials, where you find yourself defending a variety of quirky characters. The bulk of these sections are played by, well, to be honest, reading… a lot of reading. It’s here that you really need to take notice of what every witness has to say and compare that information to data collected in various forms which is stored in your inventory, or in the case of this game, the courtroom notes. 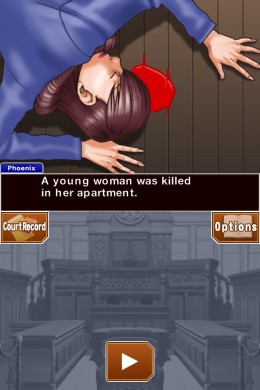 If you’re not a fan of exercising the old eyeballs, Phoenix Wright may not be for you but for those of us old enough to remember text adventures on the Commodore 64, or even anyone who likes a bit of “choose your own adventure", you’re in for a bit of a treat. The stories are entertaining, the characters interesting and the puzzles well thought out. At times you’ll get stuck but nothing is straight out of left field… a bit of logic will get you through the toughest parts and see you laughing in the face of that smarmy prosecutor.

As for the Retina renewal of this hit series, unfortunately it isn’t much of an improvement. On my iPad 4 the game doesn’t make use of the entire screen area, leaving a black border around the edges as if it’s an iPhone-only game running in 2x mode. What’s more is that there isn’t support for the widescreen of the iPhone 5 either. It’s not a huge issue, it’s just a bit odd. Also, I find the art a bit lacking. The backgrounds are simple and well painted but the characters all look a little rushed, with very basic shading in the way of obvious digital paintbrushes and wavy lines (again, the lack of true iPad Retina support becomes apparent).

This iteration screams “slightly above average indie title", not Capcom quality. It’s not ugly to look at, by any means, I just feel it has lost a little of its character from the pixelated goodness that graced the screens of the DS (and even the original iPhone port of said game). As for the gameplay, it has been well-preserved from the original versions and rightly so. It’s a challenging brain-teaser that reeks of individuality, sports an intuitive user interface and the free content alone makes this one worth downloading.

Included in the free download are the first two original cases from the inaugural episode in the trilogy. The first case is only a single courtroom segment which acts as a glorified tutorial and it does its job well. Here you see yourself defending your childhood friend, Larry Butz (no, the names don’t get any less childish), who has been accused of murdering his girlfriend. Following on from that, well, I can’t say too much without revealing spoilers, as it is tied in with the first case but suffice to say, it’s another murder mystery. This second case, “Turnabout Sisters", throws in the investigation segments and brings the game into the realm of a true adventure. After the completion of the Turnabout Sisters, you’ll need to part with some greenbacks if you want to continue on your adventures. 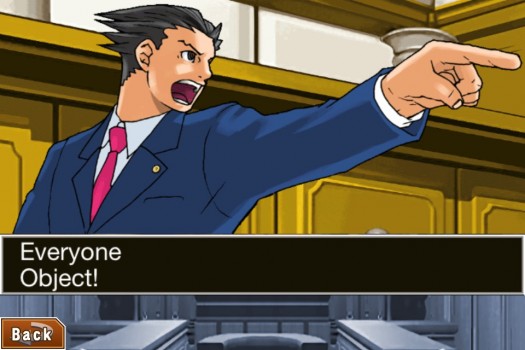 Seeing as you get the first two trials in game one free, the full version is cheaper to unlock than episodes two and three and will set you back $5.99. The sequels weigh in at $6.99 each, or you can obtain the entire collection for $16.99.

Ace Attorney: Phoenix Wright Trilogy HD is an excellent adventure experience all-round. Sure, the lack of true iPad Retina or widescreen support is a bit of a letdown, but it’s hardly a deal-breaker. The intuitive interface, originality and grin-inducing gameplay has all been preserved and will keep even the best adventurers entertained for hours… days, if they opt for the IAP extensions. However, the iOS version is great simply due to the source material being great, and it’s a shame that Capcom couldn’t put more effort into this remake to create a truly ultimate version to own.