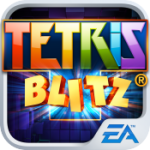 Earlier this month, EA soft-launched a new version of the iconic block-clearing game Tetris in the Canadian App Store, called Tetris Blitz (Free), and we took the title for a spin in a TA Plays video to see what it was all about. Basically, it’s the Tetris block-dropping-and-clearing that we all know and love, but stuffed into a fast-paced timed mode similar to Bejeweled Blitz (Free). It’s pretty good, despite being littered with all the freemium trappings that we’ve come to expect on the App Store.

Today, Tetris Blitz graduated from its soft-launch status and has released outside of Canada and into the world at large. Here’s an official trailer showing the game in action.

Tetris Blitz is actually a great version of the classic game, and out of all the various Tetris games that have been released on the App Store over the years this one really nails the touchscreen controls the best. The downfall, of course, is the freemium-ness of the game, but at least it’s not completely in your face and is pretty easily ignored. Anyway, it’s free to check out, so if interested definitely give Tetris Blitz a look.