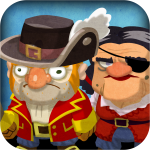 Back in March, renowned game designer Ron Gilbert left Double Fine Productions in order to branch out and do his own thing. Following that, Gilbert revealed that he was working on a new iPhone game called Scurvy Scallywags in The Voyage to Discover the Ultimate Sea Shanty. Seriously, that’s the name. It almost seemed like a joke at the time, but Scurvy Scallywags was actually a real thing – a match-3 style game with RPG trappings.

Looking to differentiate itself from the glut of matching games on the App Store, Scurvy Scallywags uses an interesting mechanic where after a match is made the game board collapses in the direction of the match to fill in gaps, rather than just dropping all the blocks downwards like most matching games. Seems like a small change but a potentially significant one, and you can tell that Scurvy Scallywags has a ton of personality in its first official trailer.

Gilbert is not alone on Scurvy Scallywags, either. He has partnered up with Clayton Kauzlaric, the designer of the 2003 Xbox title Voodoo Vince. Gilbert and Kauzlaric have teamed up in the past too, for the 2010 action-RPG DeathSpank and more recently for the quirky and enjoyable iPad game The Big Big Castle! ($0.99) last July. Can a proven developer power couple like Gilbert and Kauzlaric reinvigorate a tired genre like match-3? I hope so, and I’m looking forward to finding out when Scurvy Scallywags launches sometime in the near future.