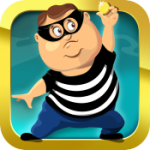 “Endless fallers" isn’t a proper genre name, but if it was, that would be the easiest way to describe Daddy Was A Thief ($1.99) In Rebel Twins‘ latest, you play as the titular daddy — imagine a more nefarious Andy Richter — who finds himself abruptly fired and turns to a life of crime to provide for his family. Instead of cooking meth a la Breaking Bad, he opts for something much more traditional: robbing banks.

Every game starts off with dad escaping the bank’s rooftop and then leaping onto an adjacent building’s roof presumably to make his escape. He automatically runs from left to right, reversing course whenever hitting anything, which frees you up to either jump (swipe up) or smash through the floor below (swipe down). That, pretty much, is the entire game.

Nevertheless, Daddy Was A Thief tries admirably to not feel repetitive. There are obstacles to get in your way, certainly, but part of what keeps things moving are the aesthetics. It’s a subtle move, but each floor is a different, bright, warm color. When you’re crashing through floor after floor, it tricks the eye into feeling like there’s more variety than there really is. Not that Daddy Was A Thief is tricky: It has a few core things going on, and sticks only to them. 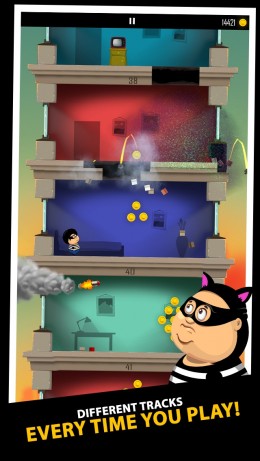 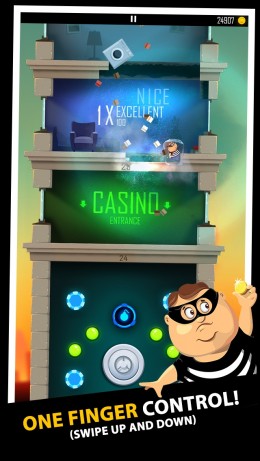 To impede your progress, you’ll have to deal with a wide variety of threats, both human and inhuman. Of the latter, you’ll have to contend with errant missiles being sent to stop you and lasers that can shrink you in one blast — making it much harder to shatter the floor below. Of the former, you’ll run into residents (grandmas who can mule-kick you back a few floors), cops (who will club you), and fellow criminals (who will shoot you). Aside from the laser, one hit from anything will kill daddy immediately. To keep things still family-friendly (aside from, you know, all the theft going on), he doesn’t explode into a geyser of blood — he just collapses into a weird, stone skeleton.

Your main objective, really, is to just keep moving and falling as quickly as you can. Being an “endless faller," the only thing you’re striving for is to beat your own record and see how far down you can get.

To further shake up the rhythm of things, occasionally you’ll crash-land into a casino floor, where you’re no longer in control and watch as dad balloons up into a giant ball. It’s a funky mix of pinball and pachinko, and you wait to see whether he’ll collide into all the green bulbs on the floor. If he does, the casino will “pay out" its entire vault.

For such a frenetic game, it’s somewhat odd that control is wrenched away from you so suddenly on these floors. This is even more frustrating because occasionally dad can get stuck between obstacles, and you can no longer move at all. This usually happens on the casino levels, or it did to me, and so I was forced to surrender all my momentum and just quit back out to the main floor. In all my marathon sessions, I only got stuck on one other regular floor, and in that case a missile eventually struck me down.

The coins you earn can be spent for upgrades and power-ups. These can add new wrinkles to the game via rockets you can board (which you tilt to control), potions that turn you into the Hulk, and, a la Jetpack Joyride and many others, magnets that will make coin-collecting all the easier.

This sounds like a back-handed compliment, but as far as iPhone games that can be used as time-killers, Daddy Was A Thief is perfectly suited to make you miss your subway stop or not realize the line in front of you has been moving. Or, if you don’t want to leave the house, it’s great to play while your console games are updating or installing. Its simplicity is what makes it work, so as long as you aren’t looking for your next deep iOS gaming experience, Daddy Was A Thief should fit the bill.