Talisman is a geeky boardgaming legend. Created in 1983 by Games Workshop, it features a broad range of fantasy archetypes (Elves, Wizards, Monks, etc.) competing to be the first to reach the Crown of Command.

Each of the heroes available has a simple set of RPG stats, including Strength and Craft (magical power); plus one or two special abilities, such as the Druid’s ability to change his alignment at will. Some also have drawbacks: the Monk can add his starting Craft to his Strength when fighting, but can never equip weapons.

The goal is to reach the center of the board, but movement is intentionally imprecise. Each turn you roll a die and move that many spaces in either direction then follow the instructions for the space you landed on: usually drawing one or more Adventure cards, which can represent monsters, loot, followers and other kinds of enconters. 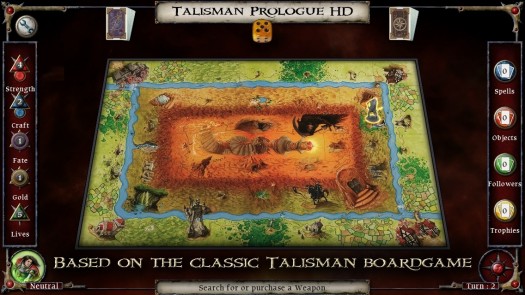 Further die-rolling is common: will the Witch grant you increased Strength, or turn you into a toad? Roll a d6. The board is divided into three realms of increasing peril, and moving inward toward greater risks and rewards is restricted. Are you ready to challenge the Sentinel who guards the bridge? You could build a raft – if you can get your hands on an Axe and then land in the Woods…

The feel of the game is a little like Dark Tower or Dokapon Kingdom, both of which may have been inspired by Talisman.

Nomad Games’ Talisman: Prologue ($1.99) is a beautiful port of the revised 4th edition of the game, and captures the tabletop feel beautifully, but it is a single-player quest-based game.

The Crown of Command still lies at the center of the board, but you’ll be going after marauding bandits and seeking ancient artifacts. Prologue features 10 of the game’s original 14 heroes, and six quests of increasing difficulty for each, starting with a tutorial in how to use that character’s powers and culminating in fights with dragons and trips to the Plane of Peril. 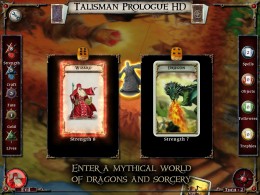 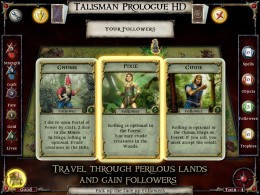 Talisman DE, a multiplayer Talisman game, is forthcoming for PC (and presumably iOS thereafter). Prologue doesn’t allow you to play the full game, but that may actually be a good thing, as its quest system makes for mobile-friendly bite-sized gaming, whereas full games of Talisman are notorious for being very (and unpredictably) long.

You see, Talisman is like a retired adventurer of venerable age: respected and full of old war stories, but old fashioned and a bit… random. Lady Luck chooses her own in this game, where success depends largely on favorable rolls of the movement die and drawing the right cards out of the Adventure and Spell decks. Knowing what you need is easy, getting it is mostly up to chance. A series of bad rolls can leave you feeling like you’re playing fantasy Snakes and Ladders: roll, move, draw… oh wait, I just got teleported back to the Tavern.

Game balance in Talisman is also approximate. The Assassin can keep foes from adding a die roll to their strength, making him the deadliest character in the game, whereas the Elf’s ability to jump directly from one Woods space to another is rarely used. Then there’s the Clairvoyant, a follower that completely breaks the game’s “Fate" system for re-rolling dice.

Prologue customizes the adventure deck for every quest, which means the Assassin will be swatting down giants when the Elf is still drawing goblins, but that fix won’t work for multiplayer: it will be interesting to see if Nomad offers balance options in Talisman DE, or just embraces the free-wheeling chaos of the original.

Talisman: Prologue offers quick loot-grabbing play and one of the best recreations of sitting down with a boxed game I’ve seen. If you have fond memories of playing Talisman with friends, you’ll want this nostalgic solitaire remix. If Talisman is new to you, Prologue can be a good way to see if you want to invest your time and money in the boxed or digital versions of this flawed but enjoyable classic.