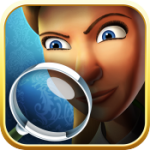 The setting and characters in Murder Files (formerly Blue Toad Murder Files) ($2.99) are bursting at the seams with English flavour, so when I first heard about the game, I wondered if it would have a similar feel to the Sherlock Holmes stories I’ve loved since I was a kid. Nope; not at all. Once I started playing, however, I found it to be very reminiscent of another, completely different style of detective story I also enjoyed in my earlier years. I remember devouring the type of books where a couple neighborhood whiz-kids on summer vacation would decide to start an amateur detective agency. During their search for, say, old Mrs. Johnson’s missing cat, they’d uncover million dollar jewel heist or some such, foil the culprit, and maybe even make the front page of the school newspaper.

The recent iOS port of Murder Files–originally released for the Playstation 3 in 2009–features that same sort of fanciful storytelling and over-the-top mysteries. Despite the alarming body count that accumulates as the story progresses, the game maintains a lighthearted and cartoonish feel. You play as one of four detectives (including, appropriately, two whiz-kids on summer vacation) from the Blue Toad Detective Agency, sent to the small town of Little Riddle for some R&R between cases. But before you can even unpack your bags, you witness the cold blooded murder of one of the town’s prominent citizens. A conspiracy unfolds, and you must put your sleuthing skills to work to unravel the mystery. 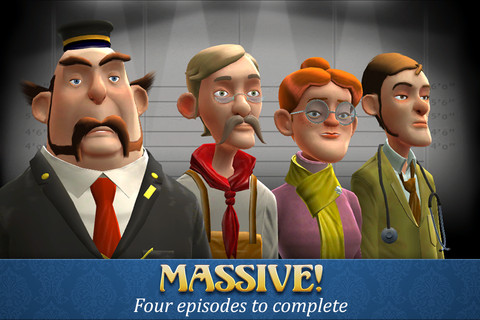 The game has two main elements: chatting with the townsfolk to gather clues, and solving a diverse collection of puzzles. Traveling around town and speaking to residents of Little Riddle is a pleasure; each NPC has a ton of character, the dialogue is well written, and the voice acting is superb. The interface works well, although I did encounter one frustration: if you’re tapping to skip through dialogue text (if, for example, you’ve already read a subtitle and don’t want to wait for a character to finish talking, or if you’re replaying a previously failed section), it’s much too easy to accidentally click on an undesired pop-up dialogue choice.

There are a few places where the mystery writing could have been tightened up a bit. At a couple points, I was supposed to figure out which suspect’s alibi didn’t hold up, but there were inconsistencies in several of the character’s stories. They seemed a bit too ambiguous to be red herrings; it just felt like there were bits of writing that hadn’t been completely ironed out. In these situations, it became a guessing game to pick which character’s story flaw was the intentional one. 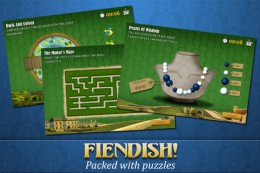 I’d be hard pressed to list all the puzzles you’ll encounter throughout the course of the game; pretty much every type of brainteaser I’ve ever encountered in a puzzle game is included in one way or another. You’ll encounter everything from word-, number-, and picture-based challenges, to logic-based story problems, to simple mini-games you’d expect to find in a casual flash game. There are more complex, unique puzzles, too. Some of my favorites included audio components. In these, a character will tell a story, slowly parceling out clues while you rush to deduce the correct answer as quickly as possible. Other challenges use sound effects in interesting ways; in one early puzzle, for example, you’ll need to listen to footsteps on various surfaces to figure which route a character took.

The puzzles vary quite a bit in difficulty. Whether you’re an adolescent, adult, or playing as a mixed group, you’ll certainly know the answers to many of the puzzles before they even appear on-screen. You’ll figure out other puzzles after noodling them over briefly, while others might stump you completely. Occasionally you’ll be forced to just take a wild guess. Some challenges call back to conversations and evidence that you encountered much earlier in the game. I was disappointed that the game doesn’t feature any sort of notebook feature. It would have be extremely handy to have a bullet list of possible clues and evidence on hand, or even just a simple in-game scratch pad to jot down your own possible clues or other items of interest. From the main menu, you can go back and re-listen to dialogue (and replay puzzles), but it’s an ungainly way to refresh your memory while you’re in the middle of playing.

Murder Files is a fairly short game; it’s divided into six chapters (as of this writing, only four have been released so far, with the last two reportedly coming in future updates). Each chapter contains a dozen puzzles or so, but you can easily play through an entire chapter in one or two sittings. They are quite satisfying as individual stories; in each chapter, you’ll solve a chapter-specific mystery while learning more about the larger, on-going conspiracy. 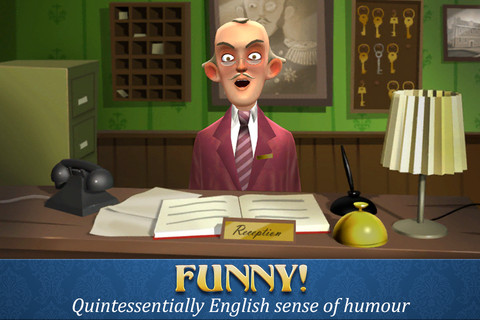 This game is quite family friendly, if you don’t object to the… well, rampant murder spree. There is no gore whatsoever, though; in fact, when the game’s first murder happened, it took me a few moments to realize that the character was dead (it looked as if he simply fell down). Murder Files features AirPlay capability, and I suspect it would loads of fun to play on a television while babysitting/playing along with a younger sibling, niece/nephew, etc. They could tackle some of the easier puzzles that felt like throwaways to me, and I wouldn’t be surprised if they instantly solved a few that had me stumped.

Before embarking on this adventure, I had just read a really good “Choose Your Own Adventure" style iOS gamebook, and that really underscored just how linear the story of Murder Files is. There are a few small diversionary choices of “Do you want to go to the red house first, or to the green house first?" but they don’t have any meaningful effect that I ever noticed; the choice is just there to give a thin illusion of control.

I can’t say that Murder Files has absolutely no replay value, but–despite my enjoyment–I can’t see how I’d ever be motivated to pick it up again (unless, as mentioned above, it was to share the experience with a younger gamer). On a second playthrough, you won’t just be following the same path through the story; you’ll experience the same dialogues and puzzles, plus you’ll already know all the answers. Players are encouraged to go back and try to earn gold medals on challenges, but you can access previously played puzzles individually from the main menu, so even die-hard completionists won’t need to wade through the entire game a second time.

Check out our forums thread if you want to read other gamers’ impressions or participate in the discussion. Despite the game’s relatively short length and lack of replay value, Murder Files offers a fun sleuthing experience, and I felt that it was definitely worth my time. While its wide range of puzzles are definitely a selling point, I’d say that charm is the game’s biggest strength. If you’re like me, you’ll find yourself compelled to continue exploring the quaint town of Little Riddle, interacting with the colorful characters, and trying to uncover exactly who is pulling the strings behind the town’s deadly, fantastic, horrific, and occasionally hilarious conspiracy.