The folks over at Butterscotch Shenanigans may be relatively new to the iOS scene, but  they’ve already made some waves with their offerings. Known for quirky humor and bright, silly visuals, I was introduced to their crazy world with Towelfight 2, a game that we enjoyed. Recently, I had the opportunity to check out a build of their upcoming game, Quadropus Rampage which looks to continue the developer’s amusing style in a different setting.

Where Towelfight 2 was a set adventure in similar vein to classic top-down Zelda titles, Quadropus takes the same action-oriented gameplay but puts it in a different setting entirely. Dubbed a ‘Rogue-like platforming action RPG’ by the devs, there’s a lot of different elements at play in Quadropus that come together for a pretty fusion of genres.

Players start every run with a level 1 Quadropus at the entrance of a dungeon in search of baddies to kill. Dungeons are comprised of randomized rooms filled with enemies, pitfalls and an exit to the next depth (i.e. room/level). Thus, the goal becomes to kill all the enemies while avoiding the chasms, and move towards the exit to the next level. Killing enemies reward orbs (which act as currency), experience, which levels up your Quadropus, and new weapons and power-ups. Interestingly, falling off the ledges instantly take you to the next depth, but at a significant health penalty. 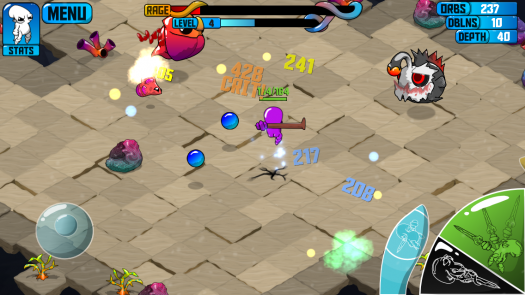 While it’s theoretically possibly to avoid killing enemies and simply look for the exits, it doesn’t seem recommended as you miss out on essential experience and possible power-up and weapon drops. This is especially important as deeper levels contain stronger enemies which will easily mow you down if you’re weak. In true rogue-like fashion, players move from depth to depth until they eventually succumb, with the next run starting at the top with a beginning level character. However, Quadropus Rampage features two different systems for improving your Quadropus between runs.

The first, simply called Upgrade, uses the orb currency to upgrade a variety of attributes that persist between runs. Examples include attack, critical damage, and special move improvements. It’s a relatively standard system and, when combined with the leveling system, doesn’t seem to offer many surprises.

The second system, known as Masteries, are a collection of achievements that award special skills upon completing them. Skill examples include earning more orbs when defeating bosses, unleashing a damage-causing explosion when leveling up, or gaining health whenever moving down a depth. If achievement hunting for skill-ups doesn’t suit your fancy, Rampage also has a premium currency known as doubloons which can be bought and used to bypass the achievement portion of Masteries (they can also be used to revive your Quadropus and continue a run).

While the game is still in flux (for example, the tutorial mode hasn’t wasn’t in), I’m really liking what I see with Quadropus Rampage. The game’s rogue-like nature, which includes randomized weapons and an amusing naming system, adds to a game that seems to have a lot more depth than one might originally see. In addition, the IAP system, at least as currently implemented, doesn’t feel onerous. Finally, as was the case with Towelfight 2, Quadropus is simply funny and share the unique humor of other B-Scotch games.

Quadropus Rampage is slated to come out in the next month and we’ll certainly keep an eye out for it upon release.