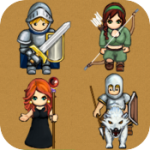 Kingturn RPG (Free) ain’t a looker. That was my first reaction to the game, as I suspect it will be yours. But for fans of tactics style turn-based RPGs such as myself, pickings are slim on iOS, so I gave the game a shot. I’m glad I did. Underneath the hood of this old beater lies a beautiful, well-oiled machine, and it won’t cost you a penny to take a look for yourself.

For those not in the know, tactics games are a subgenre of turn-based RPGs, first brought to the mainstream by Final Fantasy Tactics (which itself has an iOS port). Tactics games see you leading a small host of heroes over a battlefield in turn-based combat against an opponent. They differ from typical RPGs in that a good deal of the strategy deals with the positioning of you and your opponent’s soldiers, a bit like pieces on a chessboard.

Being a good tactician requires patience, but the dearth of tactics titles on iOS would test the patience of even the mighty Sun Tzu. Into that void comes Kingturn, a tactics title to its core. The prologue campaign is free, with the full campaign unlocked as a $4.99 IAP. Kingturn’s gameplay owes much to its predecessor, Final Fantasy Tactics, but from the start the game begins to stake its own territory. The first thing you will notice is that this game is not merely challenging, but hard. Kingturn will try the skills of even veteran strategy gamers. Beyond the game’s refreshing difficulty, Developers Mangobile have also brought some truly innovative gameplay elements to the table. 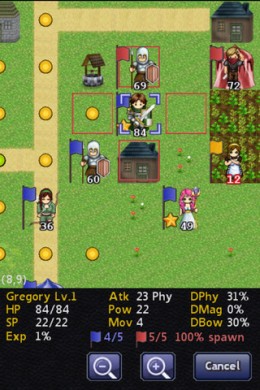 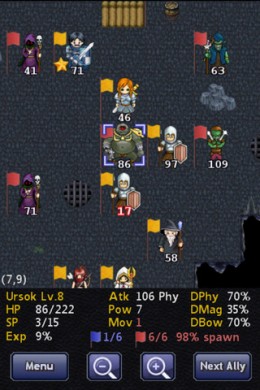 Instead of selecting your soldiers prior to battle, as in most tactics games, in Kingturn you frequently start the battle with only a handful of soldiers. Each mission will see you and your opponent recruiting reinforcements by means of barracks scattered throughout the battlefield. In addition to acting as recruitment sites, barracks provide a host of other benefits. This has the net effect of making the capture and control of these barracks a critical gameplay element, upon which the fate of the battle hinges.

This gameplay element also introduces interesting tactical considerations, such as whether to field your best heroes right off the bat or to keep some in reserve for later in the battle so your weaker soldiers won’t be overwhelmed. What’s more, fallen soldiers are are not removed from the mission entirely but can be fielded again later in the battle. Beware, your opponent will be doing this as well, and sometimes that giant you slew at the beginning of the battle will make an unwelcome reappearance right as you were about to win. 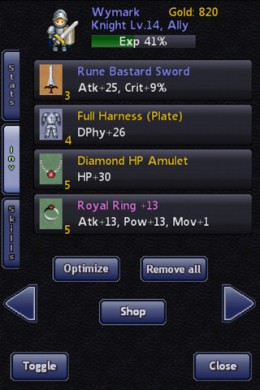 While the tides of combat may turn around the capture and control of barracks, in Kingturn battles can also be won by fulfilling the scenario-specific victory conditions or by whittling your opponent’s forces down through attrition. The battles themselves are strung together by an overworld map, which provides the backdrop for the campaign.

The best that can be said for Kingturn’s plot is it doesn’t really get in the way. The lackluster story and characters nevertheless set up a lengthy campaign, with optional sidequests and varied scenarios, such as ambushes, escort missions, and assassinations. The campaign clocks in at over 30 hours and remains surprisingly challenging throughout.

Accompanying the player on this quest are heroes and mercenaries. The heroes are acquired by progressing through the campaign, and frequently belong to more unique classes, such as trickster, wolf, or paladin. Mercenaries are hired outside of combat, and new classes–usually already represented by a hero in the player’s party–are unlocked through story progression. Some, like the wolf, are unique. While you start out with only a few of soldiers with a handful special abilities between them, by the end of the game, each turn will present you with dozens of choices as to which skills and characters to use. Fortunately, Kingturn introduces these characters and abilities at a measured pace, slowly enough to keep you from being overwhelmed, but quickly enough to keep the game feeling fresh.

Outside of battle, you will spend your time at your camp, where you use gold acquired from battle to buy equipment, recruit new mercenaries, and train your soldiers. Itemization in Kingturn is great, with multiple options for each class and item slot, providing the player with many tactical choices. Two characters from the same class can play quite differently depending on how they are equipped. Alternatively, with the press of a button the game will equip your soldiers for you.

Kingturn RPG’s ugly exterior belies the brilliant tactics game beneath. If you’re looking for good graphics or story in a game you should look somewhere else. However, if you’re looking for a strategy game that will truly test your mettle, look no further than Kingturn. Once you get past the game’s slapdash looks and story, and its somewhat steep price, it becomes apparent that a great deal of thought was put into delivering a downright compelling tactics experience. Even better, with the prologue chapter free to play you’ve got nothing to lose by giving the game a try. That’s enough for a recommendation from us.

Was the prologue chapter enough to suck you in? Let us know in the comments. Or you can join our legion of Kingturn fans swapping strategies in the thread on our forums.