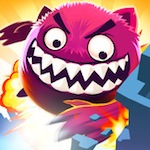 There’s not a really tidy way to categorize Chillingo’s Madmonster. It’s not a runner, even though it does task you with guiding a tiny monster dude around a world from left to right in an endless charge. It’s not a platform game, even though its core mechanic revolves around that monster bouncing up and down and smashing various objects. It’s a game that sits in the middle between these two genres, satisfying neither’s conditions as neatly as I want it to. And while I’m being wishy-washy: it’s not a thrilling game, either, though it is a competent arcade-y game.

To rewind: In Madmonster, you control a brown-ish, pink fuzz ball with some nasty looking teeth in an overall quest to destroy everything in its path. By tapping on either the left or the right side of the screen, you plough this furry ball of death into anything that gets in its way. Curiously, whenever you make contact with an object — be it tank, bomb or even satellite dish — the monster bounces off of it and then goes airborne. The more junk you run into as you’re flying through the air, the higher you go. If you get high enough, you hit outer space, instantly reminding you that, yes, this is a video game. 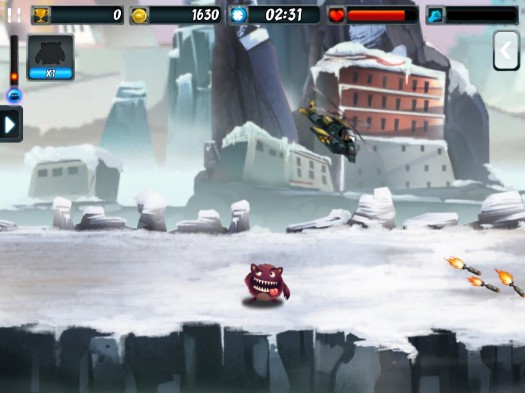 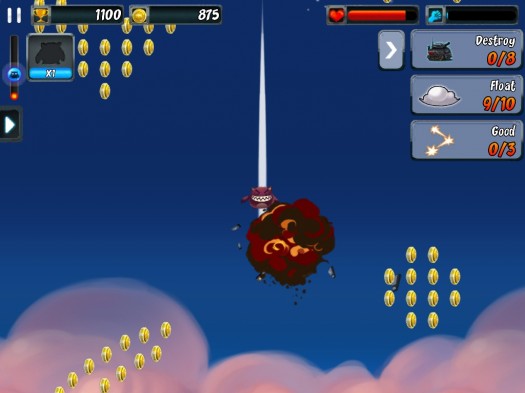 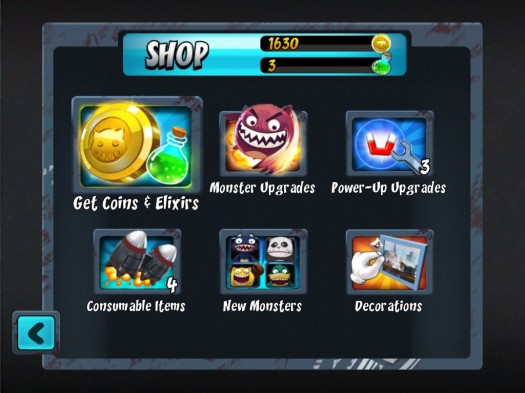 The overarching goal is simple enough — destroy stuff, got it; check. But the scenario design does a good job breaking this task down into its finer parts, giving you more to do than wanton savagery. To get through a given level, you might need to obliterate 10 helicopters, 10 tanks, and ten infantry. Or maybe you’ll need to stay airborne for a handful of seconds, as well as kill 10 tanks and 10 infantry. A handy chunk of UI in the corner reminds you of the tasks needed to progress, while a timer keeps you from hanging out and chilling instead of wrecking stuff.

The core loop goes pretty predictably. Run into a level, smash into stuff, and rocket up and away into the skies while smashing into more and more stuff. I’ve been getting cheap arcade thrills from this and the controls feel fine, but there’s not much more to it. I feel like there needs to be a little more depth here. Also, strangely, Madmonster does a really bad job pointing out when there’s an object underneath you, which makes keeping a bouncing combo going almost entirely a luck-based thing.

That’s not to say it’s bad; this is a competent game. Everything works. You hit stuff, you get points. Click; treat. It’s when you start needing something less visceral from the game is when it starts falling apart in my head.

Anyway, now for the model: even though this is a regular, premium game Madmonster has an in-game store. You can buy power-ups, upgrades for your ball, decorations, new monsters, and consumable items from it with coins, which can be grabbed in levels or obtained via an in-app purchase. I really don’t want to spend an hour talking about this, so I won’t. I’ll just leave it at this: my initial impression is that this game is pretty aggressive with its store, which is baffling since, you know, the game cost money and all.

If you just like flipping out your phone and doing something mindless, this might just be up your alley. Just check out the video we’ve got in this post to see if it’ll click with you, otherwise maybe keep tabs on our forum thread and see what other people are thinking, too. Who knows? Maybe it has a super exciting end game.

Madmonster releases tonight on the App Store. You can add the game to your Watch List via our app (Free) and get a Push notification whenever it releases.