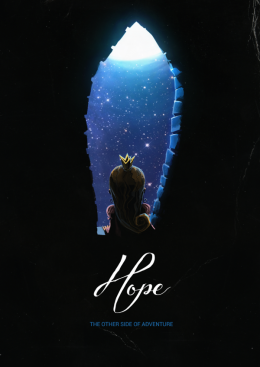 In this day and age of checkpoint-laden shooters, disposable free to play games, and other flashy titles trying to stay afloat in the sea of the App Store it’s pretty rare to have a game make you stop and think, or even let out an audible “Huh." Mr. Roboto Game Studios’ upsets that balance with the just-released title Hope: The Other Side of Adventure (Free), a totally free adventure game of sorts where you “play" in bite-sized chunks and explore the story of what the stereotypical video game princess is feeling as she awaits rescue. It’s super clever, as in most princess-rescuing video games the princess basically serves as a necessary MacGuffin to give a game a purpose beyond “Hey buddy, just complete these levels." I mean, we’ve seen this going back to the earliest games, and even persisting through modern-day titles. I’m not sure what the princess is even up to as you’re collecting coins in Mario or Triforce fragments in Zelda is something many people even think about, as to the game, it’s largely irrelevant.

Hope: The Other Side of Adventure is unlike any game you’ve played before, so much so that the developers even felt it necessary to include the following warning at the start of the game: 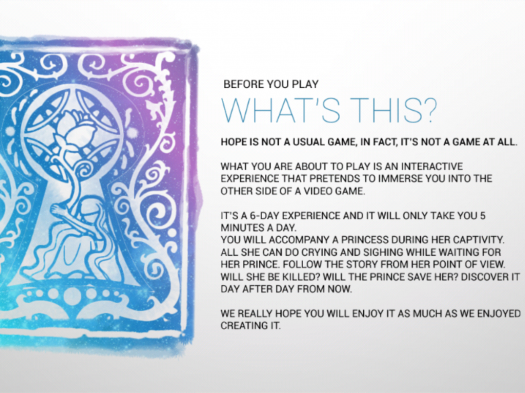 As mentioned above, you play as the princess and your control options are limited to moving around your cell, sighing, and crying. That’s it. Each play session is five minutes long, and the tale is told over the course of six days. So far I’ve experienced the first “chapter" of the game, and really dig the setup. You hit the first stopping point quickly, at which point the game just tells you to come back tomorrow.

If you’re into these kind of experimental games on any level this is something that should be on your iOS device. Give it a download, grab some headphones, turn down the lights, and take it in. Discovering this kind of thing is seriously my favorite thing about the App Store. If you want to know more about the game, the developer has posted an extensive blog entry [Translated] on the Mr. Roboto site, but I strongly recommend at least giving the first play session a shot before checking it out to avoid lessening any of the game’s impact.

We’ll post a deeper look at game next week once we’ve made it through the whole process as the developer intended. I can’t wait.