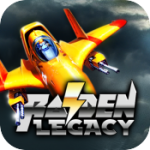 The retro game porting experts at DotEmu have brought all sorts of classics to the iOS platform in impressive fashion, and this past December they gave us the landmark scrolling shooter Raiden along with some of its sequels in one tight little package called Raiden Legacy ($4.99). And for the first time since launch Raiden Legacy is on sale for just a couple of dollars, down from its normal price of $4.99.

Of course since this is the work of DotEmu you can expect all sorts of great features and options in Raiden Legacy. Control-wise you can adjust the speed of your movement, even setting it to the arcade original. By default touchscreen controls make shooters like this easier since the ship moves at the speed of your finger, so the arcade setting is nice for purists. You can also move your bomb and fire buttons around to wherever you like or just toggle auto-fire on or off. There’s also video settings including running the game in fullscreen or the original arcade aspect ratio, and a toggle for video filtering if you like your pixels smooth or crisp.

If you were a Raiden fan back in the day, or if you’ve never experienced the series but love yourself a good shoot ’em up, definitely jump on Raiden Legacy during this sale. Hopefully the folks at DotEmu have another compilation in the works that will include the other two games from the original trilogy, Raiden II and Raiden DX, and then I can finally die a happy man.