PopCap’s Bookworm Heroes (Free) finally saw its international launch tonight after what’s seriously been months of the game being soft launched in Canada. No joke, the thread for its Canadian release on our forums was actually originally posted on December 4th, 2012. I spent some time with last year’s release of the game, and it really doesn’t seem like there’s a whole lot different from the actual proper international version aside from potentially minor balance changes or other things that are hard to notice.

The basic gist of the game is you either challenge your Facebook friends or random opponents to turn-based word battles. It’s a lot like Writer Rumble in that your Scrabble-like individual word score gets converted into attack damage and the game is over once someone has reduced their opponents hit points to zero. You take turns until this happens, with various power-up style letter blocks potentially appearing that allow you to do way more damage. 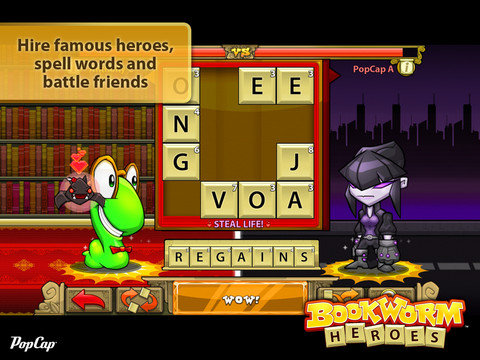 As mentioned, my initial impressions of this version of the game mirror those of a few months ago in that I really don’t like it when games lock me in to using Facebook for matchmaking. Personally, my Facebook is a safe place with only friends and family, not random weirdos I play video games with. Sure, I could have a second account, but that really seems less than ideal when services like Game Center exist. Additionally, the turn-based “combat" just feels really slow when you’re used to the pace of what you’d typically think a Bookworm game to feel like- Particularly as you’re left with nothing to do while you wait for all your opponents to make their move(s).

On top of that, it’s also really free to play, with way too many UI elements dedicated to largely displaying just how many bonus coins (the in-game currency) you can get by connecting your Facebook and doing other social-spammy things. I suppose it’s worth checking out just to see the dark path the creators of Bookworm ($1.99), Peggle ($0.99) and Plants vs. Zombies ($0.99) seem to be on with all this free to play junk, but I can’t imagine Bookworm Heroes living a very long life on my device.