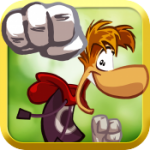 When Ubisoft and Pastagames hooked up last year to make a mobile iteration of the hit console platformer Rayman Origins, they really hit the nail on the head. Rayman Jungle Run ($2.99) distilled the fun of the full-blown title into a mobile-friendly auto-runner with brilliantly designed levels and a simple two-button touchscreen control scheme.

We loved Rayman Jungle Run in our own review, but Apple seemed to be partial to the title as well, as they actually named it their pick for Game of the Year last year.

The Rayman Jungle Run experience was extended this past December with a batch of new levels, and today an even bigger update has been released which adds even more new levels to the mix. Two new worlds – one pirate themed and one, err, weird plant-themed – each add ten new levels of running, jumping, punching, hair-as-a-helicopter floating, and more. Update: here’s a trailer of the new stuff:

So if you’ve been enjoying Rayman Jungle Run on your device for the past half a year or so, and have beaten all the goals to death, time to dust off that app icon and give these twenty new levels a go. There really isn’t a better example than Rayman Jungle Run of cramming all the presentation and personality of a hit console game into a mobile package.